The Haphazard Invention of Romania 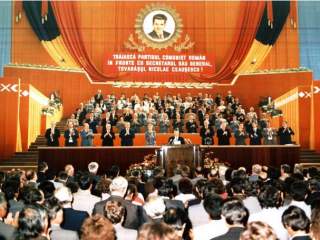 To appreciate just how unhappy Romania’s history is you have to realize that the closest it ever came—and that wasn’t very close—to a Golden Age was during the reign of its first king, Carol I, younger son of the Prince of Hohenzollern Sigmaringen, one many small German principalities of the day and a cadet branch of the Prussian Hohenzollerns. Trained as a military officer, industrious, dedicated and with a strong sense of duty—though not much else—Karl (Carol in Romanian) was a stern but mostly benevolent ruler who brought a measure of prosperity and modernity to the former Ottoman backwater, and transformed his capital of Bucharest into an elegant belle époque city. So much so that proud, Francophile Romanian aristocrats of the era delighted in comparing their capital to the City of Lights. This was not always to the gratification of Parisians, as illustrated in a short exchange in The Debauched Hospadar, an amusing erotic novella written by Guillaume Apollinaire on the eve of World War I. As I recall it, a visiting Romanian boasts to a Parisian, “Bucharest is like a little Paris,” to which the Parisian replies, “Perhaps, monsieur, but fortunately Paris is not like a big Bucharest.”

Romania’s first queen, a rather large, earnest, talented but loopy lady drawn from another of Germany’s minor princely houses, threw herself into her role as royal humanitarian and self-appointed poetess laureate. Her poems, fairy tales and essays, were written under the pen name “Carmen Sylva” and many of them were inspired by the beautiful Romanian countryside and local folklore. She was widely read in her time, not just in Romania but also in Europe and America. Before suffering a mental breakdown, she also presided over a cultured circle of courtiers and visiting poets, painters and writers. My paternal grandmother was a friend of one of them, an Armenian painter and bon vivant she always referred to as “Calouste the Artist” when he visited Washington in the early inter-war years. He once hosted a private banquet for her at the same Mayflower Hotel where I would meet Nicu Ceaușescu, a far less cultivated guest, nearly half a century later.

But Romania was much more than courtly glitter in the reign of Carol I. Although there was a bloody—and bloodily suppressed—peasant uprising, there was also the first stirring of a “native” middle class as schools were built and scholarships were made available to promising young Romanians from humble backgrounds. Romania became a major petroleum producer and the granary of the Balkans. The momentum of the age seemed to favor gradual, peaceful progress as feudal Wallachia and Moldavia started to cohere into a modern nation-state.

WORLD WAR I put an end to all that. King Carol I died in 1914, some said of a broken heart, as Romania was pressured and bribed into joining the Allies. King Ferdinand, Carol’s nephew and heir, a dutiful, well-intentioned man of modest attainments whose main pleasure in life was driving steam engines, had to flee the capital and spend much of the war sheltering in Jassy while most of his country was occupied by the Central Powers. And while Romania ended up on the winning side and picked up Transylvania at the peace table, the country had been bled, humiliated and destabilized. Meanwhile two lethal imps—Fascism and Communism—had escaped from their bottles, and Romania became one of many battlegrounds for fanatic supporters of both the new “isms.”

Throughout the interwar era, Romania experienced a political running fever or walking pneumonia in which an ever-more-corrupt monarchy headed by Carol II—a scheming, unstable opportunist who squandered the prestige of the monarchy that his father and great uncle had painstakingly amassed—alternately, and sometimes simultaneously, waged war on the fascist Iron Guard and the Moscow-backed Romanian Communist movement. It was a low-budget, slow-motion version of the more explosive struggle going on in that other European periphery, the Iberian Peninsula, during the Spanish Civil War.

Romania’s Franco would be Field Marshal Ion Antonescu, a ruthless soldier-politician with genuine nationalist sentiment and, alas, equally genuine anti-Semitism. Kaplan accurately describes him as “the Nazi-era military ruler with a complex legacy (his alliance with Hitler was based more on necessity than on philosophical conviction, even as he fitfully began the process of switching sides in the midst of World War II after the Nazis had been defeated at Stalingrad).” Perhaps the biggest difference between Franco and Antonescu was geopolitical rather than personal. Spain, thanks to geography and the diplomatic dexterity of Franco, managed to stay out of World War II (Hitler once said that he would rather have a tooth pulled than negotiate with Franco) and was in a safe space far away from Russia in its aftermath. Antonescu—like Romania—was forced into the war and ended up on the wrong side of the Iron Curtain. He was quickly executed after a show trial. Romania’s Communist era will be more familiar to most of today’s readers, although Kaplan’s narrative gift and eye for the telling bit of color or dialogue fill in many details and do a great job of evoking a semiautonomous Marxist-Leninist regime that was only slightly less wacky than Enver Hoxha’s Albania or the North Korean regime run by several generations of a dynasty that combines the worst characteristics of Stalin and the Kardashians.

WHERE DOES Kaplan see it all heading? A bit of atmospheric impressionism gives us some idea:

“In the center of a park [in present-day Bucharest] I came upon a plaza, around which were arranged massive stone busts of postwar Europe’s founders: Jean Monnet, Robert Schuman, Konrad Adenauer . . . The sculptures, which had the monolithic, minimalistic style of Easter Island heads, were powerful and mythic in their effect. These were the liberal gods that offered a respite from history for this Latin nation in the Balkans. United Europe meant not only the end of war: it also meant a world of modern states—with all their impersonal legal norms, which offered protection for everyone as a sovereign individual—rather than a world of ethnic nations with age-old disputes, which had been the curse of Romania all along. That, even more than prosperity, was the underlying raison d’être of the European Union to which Romanians so aspired.”

Kaplan’s closing reflections are by no means Panglossian, but they are moving and offer some hope for the future. What, he asks, will postmodernism bring to Romania, and, by extension, all those other wounded former satellites in and around the Balkans?

“At the very least we can hope that the central horror of the twentieth century—that ‘baroque synthesis’ of Communism and fascism, as epitomized by the Ceaușescu regime, in the words of the scholar Vladimir Tismaneanu—will not be equaled or even approached . . .”

At journey’s end, looking across the Danube from the Hungarian side, Kaplan finds himself thinking of

“the Romanian philosopher Constantin Noica and his disciples living in the Carpathian Mountains during the worst years of the Ceaușescu regime, holding intense discussions that went on deep into the night about Kierkegaard, Heidegger, Foucault, Hegel, and Goethe—keeping the flame of humanism alive, since it was the canon of Western philosophy and literature that constituted, in and of itself, a hopeful rebuke to the low culture of Communism all around them . . . And as I looked out over the nighttime Danube and its many bridges strung with lights—I thought of an Orthodox priest I had met seven hundred miles downstream on this same river . . . who had told me about the Gothic-inspired roof of his wooden church, and how it indicated Romania’s yearning for the West.”

A noble prospect, in both senses of the phrase.

Aram Bakshian Jr. is a former aide to presidents Nixon, Ford and Reagan. His writings on politics, history, gastronomy and the arts have been widely published in the United States and abroad.