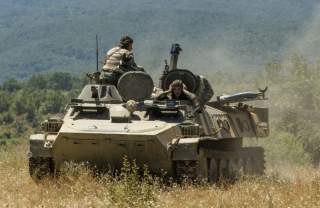 Begin with what is obvious: no responsible citizen ought to support in any way the presidential aspirations of Donald Trump. But in a wild election season, intelligent discussion cannot afford to end there. The past few weeks have cemented an extraordinary alliance to defeat Trump that joins two foreign-policy sects that were never entirely distinct: the neoconservatives who commandeered the Bush-Cheney foreign policy of 2001-2006, and liberal interventionists who supported the Iraq war, the Libya war, an expanded program of drone killings, and military intervention in Syria beyond what the Obama administration has allowed. With a spate of recent articles and op-eds, these people are preparing the ground for Hillary Clinton to assert that the Russian government is in league with the Trump campaign, and that Russia has intervened in the election by releasing hacked Democratic National Committee emails to embarrass Clinton.

In Slate magazine, for example, Franklin Foer explained that “Putin has a plan for destroying the West—and that plan looks a lot like Donald Trump.” The Washington Post columnist Anne Applebaum echoed this verdict: “we finally have a presidential candidate, Donald Trump, with direct and indirect links to a foreign dictator, Vladimir Putin, whose policies he promotes.” Foer and Applebaum have written earlier about Putin, in articles that had a stronger factual basis, and their stances are not surprising. A more telling measure of the efforts in the mainstream media to project a sinister association between Trump and Moscow may be found in a column by Paul Krugman entitled “The Siberian Candidate.”

Krugman here floats the idea that Trump may be a Russian agent, “Vladimir Putin’s man in the White House.” Stimulated by his own conjecture, he goes on to suggest that Trump “would actually follow a pro-Putin foreign policy”; that “Mr. Trump does, indeed, admire Putin”; that Trump’s helpless fondness for Putin comes out in his insistence that our NATO allies pay their share of the cost of maintaining NATO; that among Trump’s advisers, there may lurk a more “specific channel of influence”; and finally (a nameless general menace) that “there’s something very strange going on here.”

Krugman’s theory strikes a new note, for him. The column is an experimental smear, not in character for a Nobel Prize economist (though reminiscent of his predecessor at the Times, William Safire). Many people, these days, are being drawn to betray their best instincts, and it is not clear that Trump can be blamed for all of it; but he has succeeded in setting the tone even for his stoutest opponents. Thus Krugman in his final sentence echoes Trump’s own favorite device of speculative slander. “You just look at the body language,” said Trump a week ago about President Obama’s words in defense of the Baton Rouge police. “There's something going on. Look, there’s something going on.” And now Krugman on Trump: “There’s something very strange going on here.”

Yet it was not Krugman but the Atlantic Monthly blogger and reporter Jeffrey Goldberg who stole a march on subsequent alarmists by saying the choice between Clinton and Trump was really a choice between Clinton and an agent of Putin. This, in turn, was a clever variation on the tune called by Goldberg’s neoconservative associates, who a few weeks earlier had agreed in designating Trump a fascist. The collected previous writings against fascism by neoconservative pundits would make a very short book. But in an uproar, as soon as Trump’s nomination became a certainty, they discovered that fascism exists and that it is evil. In the 1980s, the same persons took care to soften their description of real fascists or quasi-fascists by using the adjective “authoritarian” in preference to the noun “tyrant.” They did so in keeping with their pragmatic need to palliate the actions of despots south of the border, whom they wanted the United States to support. Look up the New Republic articles of Charles Krauthammer in the 1980s, the testimony of Elliott Abrams before the Select Iran-Contra Committees, and the flattering account of U.S. policy in Robert Kagan’s book on Nicaragua, A Twilight Struggle, and you will get a fair impression of this literature.

The truth is that the charge of fascism against Trump was a stopgap measure. Now it has been replaced by a charge that he is soft on the Communist menace, or the next worst thing—which they are betting the American mind will translate into the same thing—he is soft on the Russian menace. Fascism was never a ripe choice of terms. It gets hardly any play and commands little attention in America. For the neoconservatives, Red-baiting is a more familiar tactic and in the absence of a Red, a Russian will do. They have good reason to suppose that Hillary Clinton will take the hint and adopt the convenient amalgam in order to sow confusion. The Russian menace resembles the Communist menace in the same way that the word “Iran” resembles the word “Iraq.”

The hope cherished by Goldberg and Kagan, Applebaum and Foer and possibly Krugman too, as well as Jonathan Chait in New York magazine (who praised the “long and fascinating report” by Foer) and doubtless a good many others who have yet to weigh in—the hope is that Mrs. Clinton will put the Cold War accusation of Trump at the heart of her election campaign. The language and logical processes of these articles are shoddy, their texture is pure tabloid, and they are full of words like “stooge” and “patsy,” which the earlier writings of these opinion makers would not lead one to expect. The design calls for Mrs. Clinton to run against Trump and Putin—and to forge the closest possible linkage between the two names in the public mind—on a foreign-policy platform already signaled in such documents as the letter by fifty-one anonymous State Department workers pleading for heavier US military action against the government of Syria. Indeed, the Trump-is-Putin amalgam now defines the propaganda wing of a larger policy that was laid out in a document whose drafters were willing to sign their names: the war-party liberal and neoconservative blueprint for “Extending American Power,” published by the Center for a New American Security. Many of the people involved in these proposals are known advisers of Mrs. Clinton; and if she heeds what they are saying, her anti-Putin course is clear. Push Iran and Russia out of Syria and Iraq, take up the NATO burden in Eastern Europe, and give bigger and deadlier weapons to Ukraine.

The sheer quantity of anti-Putin articles masquerading as commonplace or common sense will give her plenty of background music to work with. A New York Times unsigned editorial on May 19 asked why Vladimir Putin was “obsessive” about extending Russian power and why he has continued to defend the Assad government in Syria. Questions as pertinent but not as easily answered might be: why the United States is obsessed with challenging Russia in Russia’s backyard, and why we have scarcely begun to persuade our supposed allies Turkey and Saudi Arabia to withdraw support from the Syrian branch of Al Qaeda. Such questions have seldom been asked because—notwithstanding what is said for public consumption—U.S. leaders fear Islamist terrorism less than Russian leaders do. This may be partly because we are farther from its source, and partly from time-honored delusions of invulnerability. Accordingly, theorists like those at CNAS spool out elegant scenarios about continuing the fight at once to overthrow Assad and to defeat his Islamist opponents, and they nurse with impunity the fantastic conceit that this can be done without many American troops. After what the world has witnessed in Afghanistan, Iraq and Libya, a realistic or an obsessed Russian leader—choose whichever description you like—might be pardoned for judging the lie of the land in Syria without consulting the U.S. policy elite or the editors of the Times.

As secretary of state in Obama’s first term, later as a Democratic voice defining herself comfortably to the right of the president, and still later as a candidate in the Democratic primaries, Mrs. Clinton triangulated neoliberal policies such as humanitarian intervention and neoconservative policies such as unconditional support of Israel. The two branches of the war party, now united in CNAS, have agreed it would be good thing for American prestige, power and force-projection to renew the Cold War, and to do it with the best available target, Putin, as a ready-made scapegoat. Nothing in Mrs. Clinton’s history should lead us to believe that she will resist this demagogic appeal. Trump very likely will parry the blows by cooking up nominally ferocious sayings of his own against Putin. The result will not bring the scenes of disintegration in international politics any closer to humane resolution. But why is all this not quite harmless?

There is, in fact, a precedent for the strategy Mrs. Clinton has been advised to launch. In the 1960 campaign, John Kennedy ran to the right of Richard Nixon on nuclear policy toward the Soviet Union. He accused Nixon of having allowed a “missile gap.” Compared to Soviet Russia, so the story went, the United States was fielding an inferior force of ICBMs and was losing the Cold War. This turned out to be false. The Soviet Union under Khrushchev lagged well behind, and was never in hailing distance of catching up. Even so, the mistake was a factor in the events that led to the Cuban missile crisis of 1962; and that memory ought to give pause to anyone bent on a nobler aim than getting elected. We may deplore Donald Trump for his abridgment of the protocols of honest debate, his pandering to racial and religious prejudice, his contempt for plain facts and his lack of acquaintance with facts. But to picture Trump as an agent or enabler of Vladimir Putin—and to insinuate that anyone who seeks diplomatic arrangements with Moscow in preference to a new Cold War must be “soft”—does nothing to elevate the political discourse of the moment. It takes us out of the sewer and leads us into the cesspool.