In the Hawks' Den, McMaster and Pompeo given a Hero's Welcome 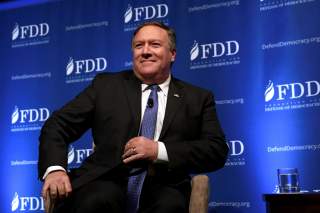 “I love FDD,” declared H. R. McMaster, national security advisor, in opening remarks Thursday at the Foundation for the Defense of Democracies security summit at the St. Regis, blocks from the White House. Following the president’s decision to decline to certify the Iran nuclear deal last week—a move FDD pushed hard for, both internally with the administration and externally with the press—the mood at the conference was ebullient.

“There's no secret here: I'm not an unbiased journalist. I'm a fan of this director. I worked on his transition,” said FDD’s Juan Zarate, a Bush 43 administration alum, introducing the summit’s other guest, CIA Director Mike Pompeo. “Frankly, I love the man.” Though serious policy discussions were had, and the events organizers readily conceded there was much work yet to be done, there was no escaping the impression that event was also a victory party. The group and its supporters had won a major battle, and helped pull the White House over the finish line in affirming a major campaign pledge of Donald Trump: to take another look at the 2015 deal.

Not everyone was amused. McMaster noted of the administration: “We need FDD’s help. … We need organizations like FDD’s help.” Daniel Larison, senior editor at The American Conservative, remarked to me: “Well, the admin has already outsourced Iran policy to them, so I guess so.” When the general complained about the status quo in Syria—"the Assad regime can only perpetuate the conflict"—Larison responded, “If pandering to the audience is the measure of a good speech, McMaster is killing it.” McMaster continued to stress the organization’s potential grand purpose, noting its research on Iran’s alleged malign activities: "Pull the curtain back on what Iran is doing! … Show the world." “FDD is doing this,” he said.

Pompeo got in hot water in the mainstream press and with critics of the president for his characterization of the U.S. intelligence community consensus on Russian interference and its impact in the 2016 election. “The intelligence community's assessment is that the Russian meddling that took place did not affect the outcome of the election,” Pompeo told the gathering. Politico slammed the remark as “false” and “inaccurate.” Thursday night, the agency issued clarification, but not explicit apology: "The intelligence assessment with regard to Russian election meddling has not changed, and the director did not intend to suggest that it had," said Dean Boyd, CIA spokesman, in a statement. The Washington Post argued that the agency had not reached any definitive determination on the impact of any Russian activities. “We did not make an assessment of the impact that Russian activities had on the outcome of the 2016 election,” a recent intelligence community report on the matter stated.

Pompeo—whose elite background includes having been valedictorian at West Point, and stents at Harvard Law and the blueblood law firm Williams & Connolly—didn’t exactly dispel the impression that he eventually, or potentially imminently, has his sights set on greater things (and is perhaps uneager to contradict the president on the Russia matter). He confirmed reporting by Axios earlier this month that he makes the most of nearly every potential moment of facetime with Trump. "I deliver the president the daily [intelligence] briefing most days of the week," Pompeo said, adding that Trump deeply values the “work product” of the intelligence community.

At one point, he implicitly contrasted his management style with Secretary of State Rex Tillerson’s. While Tillerson has been sluggish to staff and has cut some recruitment efforts, Pompeo told audience: “For those of you who are interested in a patriotic place to spend their time, CIA.gov is the place to go.” While Tillerson has assented to cuts at Foggy Bottom, Pompeo argued, “A good strategy without resources is just wishful thinking” and said the president had his organization’s back.

Pompeo knocked the “modernization effort” undertaken by his predecessor John Brennan, downplaying the focus on internal reform. “I think less about org charts than I do about mission, and I’ve told our team this. I’ve asked everyone to say, ‘Do not print the org chart out!’ I mean look, the finest companies in the world are restructuring their team every day. ...Start with mission, not with org chart. The organization and the team will fill itself out if everyone’s focused on the mission.” Tillerson, who ran Exxon, has spent much of his first months in office conducting an extensive internal review and reorganization of State, and has indicated efficiency is more important to him than diplomacy, his department’s raison d'etre. In contrast, apparently, to Pompeo, Tillerson deeply values process—“lives and dies” by it, a former Exxon executive told me last month. And unlike Pompeo, one gets the sense Tillerson is up into to the wee hours designing and redesigning his own org charts.

But the CIA director did backup the secretary on one issue: North Korea, offering perhaps the most open-to-diplomacy statement from a senior administration in weeks. “No", the diplomatic channel with North Korea is not closed, Pompeo told reporters, despite the president calling it a waste of time. "Secretary Tillerson and his team are hard at work." On another issue, Pakistan, he was less sparring, consistent with Trump’s harsh message to Islamabad earlier this year in his address to Congress. Pompeo said that American expectations of Pakistani help in combating radical Islamic extremism—a phrase he used—“should be set at a very low level.”

While FDD’s portfolio runs the gambit of global issues, it’s clear its heart is focused on countering the government in Tehran. While declining to certify the deal and attempting to fix it is the current focus vis-a-vis Iran, the U.S. must come to grips with Iran’s broader rise, argued FDD’s John Hannah, a former aide to Vice President Dick Cheney. Hannah toasted the administration for likely being the first since the Islamic Republic came into being in 1979 to invest “the time, energy and attention to developing a comprehensive, holistic strategy toward Iran that attempts to address the full multiplicity of the threats it poses to the interests of the United States.”

But, “now the real challenge comes—executing,” said Hannah. What does that include? “Unfortunately, while we can ask local partners to do a lot for us—and an awful lot more for us—it will almost certainly require a healthy dose of American military,” Hannah said, pausing before adding, “Perhaps additional doses of American power, including, in certain circumstances, troops on the ground.” So, while the atmosphere in the St. Regis was marked by revelry, for others, like Larison, who think the current drive against Iran resembles the run-up to the war in Iraq, Thursday’s event was a grim affair.