The Head of Hezbollah Is Slamming Bahrain's Ruling Family 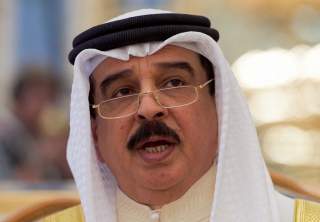 In October 2016, on the commemoration of a religious holiday for Shi’a worldwide, Hezbollah chief Hassan Nasrallah reiterated his solidarity with Bahrain’s Shi’a and called for protests against the repressive Sunni-led Bahraini government.

While this speech received little media attention in the West – most likely dismissed as more inflammatory rhetoric from the highly controversial Nasrallah – it actually bears great significance as Shi’a communities in the Middle East become more united against the Sunnis. Shi’a political and activist networks are a growing trend as Iran becomes more entrenched in the Arab world. And unlike in years past, when there was scant communication between Shi’a from one country to another, there is now far more regional solidarity.

As a societal sectarian conflict has escalated since the Arab uprisings – it has resulted in all out war in Syria, Yemen, and Iraq and a low boil in Bahrain, Egypt, Saudi Arabia and other countries – the geopolitical rivalry among regional states is also fueling what happens on the ground. Each time there is a new conflict between Saudi Arabia and Iran, for example, it is played out in Arab societies. Both Shi’a and Sunni now feel they are locked in an existential struggle for the survival of their sects.

In the past, states such as Iran and non-state actors like Nasrallah espoused rhetoric to aid all “oppressed Muslims,” Shi’a and Sunni alike at the hands of Western “imperialists” and Israel. However, the war in Syria changed this public campaign into one championing the Shi’a and calling for resistance to Sunni power.

When Nasrallah made his speech in October during Ashura – the ten days of mourning to mark the death of Imam Hussein, who the Shi’a revere and who was martyred by Sunni warriors 1,400 years ago – Nasrallah called on the Shi’a to protest in Bahrain because the Sunni government had stripped Issa Qassem, the leading religious figure for the Shia there, of his citizenship. They also placed him under house arrest.

In Bahrain, a small Gulf monarchy with a 70 percent majority of Shi’a Muslims, Hezbollah party leaders have been voicing their discontent with rising abuses by the Sunni-led regime against Shi’a religious leaders and political activists. As part of the large-scale arrests, which have been intensifying at an alarming rate since June 2016, a number of individuals have been accused of being part of what was described as the Bahraini wing of Hezbollah, an organization that was sanctioned by the Arab League and the Gulf Cooperation Council (GCC) in 2013 and officially added to Bahrain’s terror list in April 2016. In March 2016, Nasrallah denied accusations that Hezbollah was arming opponents of the Bahraini regime.

This tenth day (of Moharram) comes [this year] at a time when a righteous and brave Husseini leader (Ayatollah Sheikh Isa Qassim) is besieged in his town of Diraz in Bahrain, with mass crowds surrounding his house to defend their Hussein, Ayatollah Sheikh Isa Qassim. He [Sheikh Qassim] is threatened with imprisonment or exile, in light of unjust informal trials and false accusations. [This happens] in a country whose prisons are filled with scholars, political leaders, people of opinion, and the youth struggling for freedom and the basic human rights plundered in Bahrain.

This Ashura we praise the Bahraini people for their loyalty to their leader, cause, perseverance to continue the path, and adherence to their legitimate demands. [The cause] that many martyrs sacrificed themselves for, among them men and women of Bahrain, while many others were injured, and for it the elite of scholars, men, and youth of Bahrain spend their youthful years in prison.

Hezbollah’s direct targeting of Bahrain's ruling Al Khalifa dynasty began with Nasrallah’s Quds Day speech of July 2015, when he called upon the Bahraini people to unite against their oppressors.

Following Nasrallah’s speech slamming the Al Khalifa, Bahrain’s ruling family since 1783, Lebanon’s Prime Minister Tammam Salam condemned Nasrallah’s comments, stressing, “Lebanon’s commitment to better bilateral relations with Bahrain, and all states in the Gulf Cooperation Council,” adding that, “Lebanon’s official position on foreign relations is expressed by the government alone, and not by any political party, even if said party is a cabinet member.” Salam’s reaction came when a number of GCC countries, including the United Arab Emirates, denounced Nasrallah’s speech and summoned Lebanon’s envoys in the Gulf.

Shi’a regional solidarity will only increase in the near future, as states rival for regional dominance while also trying to control the non-state actors in their midst.

Geneive Abdo is a senior fellow at the Rafik Hariri Center for the Middle East at the Atlantic Council and the author of the new book, The New Sectarianism: The Arab Uprisings and the Rebirth of the Shi’a-Sunni Divide. Fatim-Zohra Malki is a research associate at the Hariri Center.