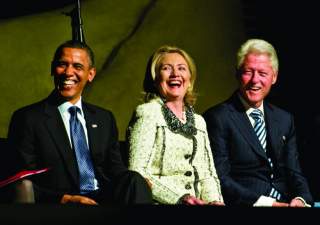 AS THE 2016 U.S. presidential race begins to take shape, would-be Republican candidates have begun to outline their foreign-policy agendas. But little remains known officially of the foreign-policy agenda of the current favorite to win the Democratic nomination, Hillary Clinton, who just recently launched her bid for the presidency. As terrorism, cybersecurity, communicable diseases and other global concerns remain in the forefront of Americans’ minds, and with no incumbent running, the race presents an opportunity for a healthy—and perhaps heated—discussion of foreign policy.

In recent decades, the most notable change in presidential politics has been the end of the Republican Party’s dominance on national-security issues. After the 1988 presidential election, when George H. W. Bush crushed a hapless Michael Dukakis, many observers postulated that Democrats could no longer win the presidency in light of their vulnerability on foreign policy. George McGovern’s campaign against Richard Nixon in 1972 fostered a narrative that Democrats were too soft on national security to be trusted, and Jimmy Carter’s presidency perpetuated the perception that Democrats were naive about the Soviet threat.

Ironically, the apogee of the notion of Republican national-security strength—Ronald Reagan’s clear vision to push the Soviet Union onto the “ash heap of history”—was the beginning of the end of the GOP’s dominance in foreign policy. After the Cold War ended and the Soviet Union imploded, Republican toughness against Communism no longer served as a central issue to voters—and, consequently, neither did the perception of Democratic softness on Communism. The American people, at least for the moment, no longer cared much about foreign policy.

By 2008, the tables had turned, and the Democrats now held the upper hand in presidential politics. Strikingly, Democrats had gone from a 1992 election in which the absence of foreign policy enabled Bill Clinton (who avoided military service in Vietnam) to win the presidency against a decorated war hero to a 2008 election in which Barack Obama defeated another war hero in part because Republicans no longer could credibly claim they were the party of national security in the aftermath of the Iraq debacle. (Nor, after the onset of the financial crisis, could they claim they were the party capable of running the economy.)

As the 2016 presidential campaign gets under way in earnest, foreign policy is again up for grabs. While candidates on both sides will spend more time discussing domestic challenges than they will international ones, the Republicans—for whom anti-Communism held the party together during most of the Cold War—will grapple with an internal debate pitting the so-called isolationists against the internationalists, themselves split between traditional realists and neoconservatives. On the Democratic side, all eyes are on former secretary of state Hillary Clinton. The assumption is that as president she would return the Democratic Party to a more activist, interventionist foreign policy after eight years of a president who has had an easier time articulating his foreign policy in terms of what he would not do (“stupid” stuff) than in explaining what he would. But that does not mean she would return the Democrats to a refurbished version of her husband’s foreign policy. While a Hillary Clinton victory would propel the Democrats toward a more activist foreign policy after January 2017, we should not expect a replay of Bill Clinton’s agenda, due largely to an American public weary of the country’s efforts to remake other societies and to an international order that the United States no longer dominates as it did in the 1990s.

THE END of the Cold War provided Democrats a golden opportunity, as the national-security credentials of the presidential candidates mattered little to voters in 1992. Bill Clinton, who focused “like a laser beam” on the economy, championed economic openness as the central pillar of his foreign policy. As part of his broader effort to shift the Democratic Party to the center, he was prepared to challenge labor unions to promote free trade. He understood that the forces of globalization were having a profound effect on international economic relations, and while Republican critics derided him as believing in “globaloney,” Clinton forged ahead. He achieved passage of the North American Free Trade Agreement (NAFTA) in 1993 and, soon thereafter, the establishment of the World Trade Organization.

While Clinton appeared more interested in issues related to globalization than anything else in foreign policy (with the possible exception of better relations with Russia that would enable him to reallocate resources from defense to his domestic agenda), a number of his advisers, including Anthony Lake, Richard Holbrooke and Madeleine Albright, urged him to advocate for a foreign policy underpinned by democracy promotion and, ultimately, the use of military force for humanitarian purposes. Democracy promotion had emerged as a theme in the 1992 campaign, in part as a means to return neoconservatives to the Democratic Party.

Traditionally, neoconservatives were socially liberal but hawkish on foreign policy, and after leaving a Democratic Party they viewed as weak on national security in the 1970s, they overwhelmingly supported Ronald Reagan for president in 1980. Disillusioned by what they viewed as George H. W. Bush’s unwillingness to stand up to China in the aftermath of the Tiananmen Square massacre, to support the republics of the then Soviet Union adequately in their bid for independence, and to end the bloodshed in the Balkans, they responded positively to the Clinton campaign themes of promoting freedom and human rights. These ideas flourished particularly in Clinton’s second term, as Albright made them a centerpiece of her tenure as secretary of state.

Likewise, under Clinton, the Democratic Party became increasingly comfortable with the use of military force. When Bill Clinton entered the presidency, his relationship with the military could not have been worse. When Clinton visited the USS Theodore Roosevelt in 1993, the press overheard a sailor telling a joke in which a protester throws a beer at the president—“not to worry, it was a draft beer, so he dodged it.” Moreover, Clinton’s proposal to end the ban on gays serving openly in the military created a tremendous firestorm. Military officers complained they were disrespected by the White House staff, and Clinton’s relationship with Colin Powell, then chairman of the Joint Chiefs of Staff, was rocky. By October 1993, after the “Black Hawk Down” incident in Somalia, it appeared that the image of the Democrats as weak on national security and seeking to avoid any use of force would persist throughout Clinton’s time in office. After all, the president and many of his colleagues had come of age during the Vietnam War, when numerous Democrats viewed America’s military not as a solution to problems but as the actual problem.

By the end of Clinton’s time in office, the Kosovo War illustrated how much had changed. Clinton led a NATO air campaign that seemingly provided the best of both worlds to Democrats: the American military appeared capable of conducting war with no casualties to U.S. personnel, and the country was willing to go to war to save innocent people from humanitarian disaster. Clinton, joined by European liberals like British prime minister Tony Blair and German foreign minister Joschka Fischer, grew to endorse the idea of a responsibility to use force to protect vulnerable populations. The notion of the liberal hawk was born—someone who believed that American military forces could help bring about democracy and protect human rights overseas. This is one reason so many Democrats supported the decision to go to war in Iraq in 2003; after all, Saddam Hussein had been among the most barbaric rulers on the planet.

FREE TRADE, democracy promotion and the use of force for humanitarian purposes defined Bill Clinton’s foreign policy; Barack Obama ran against all three in 2008. He criticized NAFTA, one of Clinton’s signature foreign-policy achievements. (Hillary Clinton and the other leading Democratic candidates were also critical.) As for democracy promotion and the use of force for humanitarian purposes, by 2008, those ideas had become associated not with Clinton and the Democrats, but with George W. Bush’s freedom agenda and its neoconservative supporters. Instead, Obama cited as his foreign-policy lodestar George H. W. Bush, whose primary focus was on relations among the great powers and the judicious use of force only in cases of clear national interest. (The primary exception in the George H. W. Bush years was the effort to feed the people of Somalia in late 1992, which led to the debacle in Mogadishu less than a year later after the mission was expanded under Clinton.)

Inheriting two unpopular wars, Obama’s foreign-policy priority in his first term was to wind down American involvement in Iraq and Afghanistan (after his initial surge in the latter) and reset relations with Russia. His actions over time have only amplified the sense of distance between the two Democratic administrations. Even though his administration has pursued blockbuster trade deals in Europe and Asia—the Transatlantic Trade and Investment Partnership (TTIP) and the Trans-Pacific Partnership (TPP), respectively—he has spent nowhere near the energy that Bill Clinton did to articulate the importance of free trade. In fact, the only reason analysts give any chance of success to these deals is the Republican takeover of the Senate after the 2014 elections and the hope that the president will therefore obtain trade-promotion authority.