The Hollowness of David Cameron 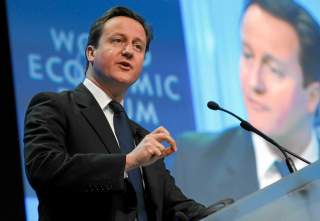 IN ANTHONY TROLLOPE’S NOVELPhineas Redux, Mr. Daubeny, a prime minister modeled on Benjamin Disraeli, proudly announces, “See what we Conservatives can do. In fact we will conserve nothing when we find that you do not desire to have it conserved any longer.” It’s a credo that Prime Minister David Cameron appears to live by.

Among a crowded field of contenders, Cameron may be the slipperiest Briton ever to have successfully climbed the greasy pole. We read his name in the papers. We see his face on our televisions and computer screens, yet nobody is quite sure who he really is or what he is doing. Buying muffins for his children? Tending to weighty matters of state? Conscientious servant? Rank opportunist? He has been at the forefront of British public life for almost a decade, yet all definitions slide off him. He has been prime minister for nearly four years, but his agenda remains no more than an aspiration. As the journalist Alex Massie recently asked, “What is David Cameron for?”

We used to think we knew: “Dave” was a modernizer. In 2005, when Cameron first rose to prominence, the British Conservative Party seemed ruined. The Tories had lost several elections in a row. They were distrusted, reviled, “the nasty party.” They needed a savior: in breezed Cameron. Only a few months earlier, nobody outside Westminster Village—London’s equivalent of the Beltway—had heard of him. His only brush with the big time had come in his twenties when he worked as a special adviser to Norman Lamont, the chancellor of the exchequer, and then Michael Howard, the home secretary. In the footage of “Black Wednesday,” September 16, 1992, when Britain announced the withdrawal of its currency from the European Exchange Rate Mechanism, you can see the twenty-six-year-old Cameron, his hair and suit unruffled, standing behind Lamont as he addresses the cameras outside Downing Street with the momentous news.

Cameron went on to have a successful career as a PR man at the media firm Carlton Communications, where he fine-tuned his genius for news management. He returned to politics as a member of Parliament in 2001 and quickly emerged as a first-rate public speaker, the outstanding figure among a group of young center-righters on a mission to “detoxify” the Tory brand and drag their party into the twenty-first century. He went to great lengths to appear as un-Tory as he possibly could. He wore Converse trainers and quoted Gandhi. He promised “compassionate conservatism” and talked about sharing the proceeds of growth. Politics, for him and his camarilla, was about “achieving progressive ends through conservative means,” whatever that meant. He bicycled around London and preached about the environment. He changed the party logo from a flaming torch of liberty to a green-and-blue tree. He lauded gay marriage and sneered at the “headbangers” on his right.

There were grumbles from the old guard. Peter Hitchens (brother of the even more famous Christopher) accused Cameron of having “mopped up the last-remaining puddles of moral, social and cultural conservatism.” Lord Saatchi, the advertising guru and former Conservative Party chairman, called Cameron’s entourage the “say anything to get elected” Tories. But most British right-wingers—a practical more than an ideological bunch—were cheered by the thought that, finally, the Conservative Party had found a winner. Cameron bested his rival David Davis, a more robustly right-wing type, took his party by storm, or at least by the neck, and instantly established himself as a popular public figure.

THERE WAS ANOTHER ASPECT of Cameron that everyone understood: he was privileged—not an aristocrat, exactly, but upper-middle class enough to be seen by almost every voter as “posh.” An Old Etonian and Oxford man who mingled among a circle of similarly smart and successful friends—the “Notting Hill set”—he seemed almost typecast from one of those soppy Richard Curtis comedy films such as Love Actually, in which English toffs roam around London being self-deprecating and charming.

Experts suggested that Cameron’s elite background meant he would never hold mass appeal. They were wrong. In the middle of the last decade, Britain was feeling affluent and strangely unburdened by notions of class. Cameron’s poshness was a good joke, and it infuriated committed socialists, but the public didn’t feel put off. Indeed, the media, even on the left, were infatuated by Cameron’s glamour. Successful journalists in Britain tend to have liberal values and come from the richer parts of London, so even if they despised Tories they could at least identify with Cameron—someone who came from money but tried to be enlightened. The Cameroons—Cameron’s immediate circle—had tailored their message specifically to placate the BBC and the Guardian, Britain’s most important lefty institutions. Meanwhile, the new-look Tory combination of enthusiasm for free markets and progressive social attitudes—mixed with social pedigree—made the party attractive again to the power brokers at News International, Rupert Murdoch’s empire, who had fallen for Tony Blair in the 1990s. This particular alliance turned out to be acutely toxic—following the great phone-hacking scandal—but in the last decade it was still considered invaluable in politics. The Sun, Britain’s most-read tabloid, embraced the Cameron project, as did the Times.

When, in 2007, Blair stepped down to be replaced by the more robustly left-wing figure of Gordon Brown, Cameron’s stock rose further still. The self-appointed “heir to Blair,” Cameron appeared destined to capture the center back from New Labour. He was the good guy in British politics; Brown was a thug.

But then disaster struck in the form of the global financial crash. Cameron found himself stranded: having maneuvered the Tories to the middle, he found that the atom of Blairite centrism—with its faith in the unifying power of neoliberal and global economics—had started to split. People were scared and wanted something more than platitudes and spin from their politicians. Brown veered left, virtually nationalizing the bankrupt banking system and presenting himself as a megastatist hero of the future. Cameron could not be seen to support Brown’s dangerous overhaul of the economy, but he also didn’t want to be viewed as unpatriotic during a crisis. He floundered, while “Super Gordon” enjoyed a bizarre political revival. Suddenly, too, the posh factor counted against Cameron: nobody wanted an Old Etonian in charge at a time of real emergency.

The “Brown bounce” didn’t last. It did, however, expose a real weakness in Cameron’s position. He needed to reassure voters that he stood for something more than his own personal advancement and that he had deep answers to the big questions posed by the crash. He needed “the vision thing,” as George H. W. Bush called it. Cameron had always said that his “progressive conservatism” had intellectual roots, but now, with the 2010 general election looming and the global crisis ongoing, he had an urgent PR need to spell it out. Encouraged by Steve Hilton, his director of strategy, and Oliver Letwin, the shadow cabinet policy coordinator, Cameron began talking about Edmund Burke and the importance of “little platoons” in civil society. He had a curious flirtation with the political philosopher Philip Blond, a “new localist” who believed that the financial crisis had created an opportunity to revive the neglected tradition of “red Toryism.” “British conservatism,” wrote Blond in a much-discussed essay in Prospect, “must not . . . repeat the American error of preaching ‘morals plus the market’ while ignoring the fact that economic liberalism has often been a cover for monopoly capitalism and is therefore just as socially damaging as left-wing statism.” At the World Economic Forum in Davos, Cameron expressed his concern that “someone working in the local branch of a global corporation can feel like little more than flotsam in some vast international sea of business.” Elsewhere, he seized on a report by Demos, the London-based think tank, about the value of stable families, those littlest platoons. “Parenting is the coalface of creating character,” he said, in a deep voice, to some applause.

ALL THIS HIGH-MINDED WAFFLE came to a head in the Conservative Party’s election manifesto in 2010, which laid out the party’s vision for the “Big Society”—a Brave New Even Greater Britain in which the state would empower individuals or small groups to make life better for everyone. The central government would act as the enabler of “social entrepreneurship,” cutting away red tape and pushing the petty bureaucracies aside to enable true localism to prosper.

It was much too grandiose an idea for British politics, and duly backfired. The concept sounded suspiciously intellectual to common sense–loving Tories—it didn’t help that the Big Society’s acronym was “BS”—and the public could not process the idea that the nasty party wanted to be nice, actually. Critics on the left smelled a Tory rat: those cruel right-wingers were at it again, they said, scrapping vital public services and dressing it up as benevolence. Polly Toynbee, the influential Guardian columnist, called the Big Society a “big fat lie.” Under pressure from his more hands-on shadow ministers, Cameron promptly ditched the BS and started campaigning again on practical policies. But the damage had been done: soon after their Big Society manifesto was published, the Conservatives’ poll ratings dipped, and they did not recover sufficiently to win an outright majority. Today, Cameron still uses the words “Big Society” from time to time as a feel-good line in the odd speech—in his 2013 Christmas message, for instance—but it’s hardly a model for reforming the nation. He would never again make the mistake of trying to be too profound.