The Honeymoon Is Over for Argentina's Macri 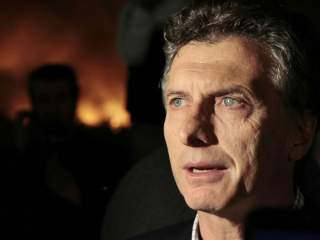 The international investment community is smitten with Argentina’s new president, Mauricio Macri. A wealthy businessman who was voted into office in November 2015, Macri vows to facilitate foreigners’ access to his country by reducing trade barriers. Additionally, he plans to cut domestic subsidy programs, which will improve Argentina’s economic stability and therefore make it a more attractive investment destination.

Macri’s neoliberal approach contrasts starkly with that of his predecessor, Cristina Kirchner. She shielded Argentina from foreign investment in order to grow domestic businesses, imposing currency controls and restricting trade. Domestically, she instituted a comprehensive web of subsidies. These trade barriers and costly welfare programs are the primary targets of Macri’s economic reform.

After nearly a decade of populist and protectionist rule, Macri’s approach has been likened to shock therapy: necessary but painful. And so far, the results have been promising for foreign investors.

On February 29, Macri’s government tentatively reached an agreement to resolve a longstanding international legal battle that has tarnished Argentina’s reputation abroad. Fifteen years ago, the country defaulted on $100 billion in debt. Since then, most of Argentina’s creditors have accepted a debt restructuring, but a small group of creditors have steadfastly refused to be shortchanged. Kirchner maligned these “vulture funds,” and a resultant legal dispute with them severely hurt Argentina’s international image, locking the country out of many capital markets. But in February, Macri’s government announced it was closing in on a deal to repay these holdout creditors.

Another indication of the international investment community’s satisfaction with Macri occurred a week before the creditor settlement. Dan Ammann, the president of auto manufacturer GM, indicated that Brazil should adopt more business-friendly policies like those of Argentina. He said this while discussing his company’s potential scale-down of operations in Brazil, which is reeling from economic malaise and a corruption scandal. Ammann stated that Argentina shows “how the situation can quickly change with the right leadership of the economy.”

Ammann’s remarks would have been unimaginable two years ago. Brazil was until recently a major foreign investment destination—one of the so-called BRIC countries, along with Russia, India and China, which was expected to lead future global economic growth. Argentina, on the other hand, had achieved near pariah-like levels of isolation in the West due to Kirchner’s policies.

At first glance, Macri appears to deserve the praise of GM and other investors. If he continues pressing through with his reforms, international businesses investing in Argentina stand to gain much from the country’s reconfiguration.

What investors forget, however, is that Macri needs domestic support in order to implement his reforms. It really doesn’t matter how much of a darling he is outside of Argentina if he fails to rally domestic support behind his policies.

This is important to remember because Macri has a tenuous mandate. He only beat Daniel Scioli, the candidate from Kirchner’s party, by less than 3 percent of the popular vote last November. And many individuals who voted for Macri did so not out of any particular allegiance to him, but rather out of fear that Scioli would continue Kirchner’s policies.

Macri is still trying to figure out his plan to dismantle the onerous web of subsidies left by Kirchner. Given his intent to clean the country’s fiscal house, though, it seems clear that the extent of subsidies’ removal will be far-reaching. Media reports, for instance, speculate that electricity rates will rise as much as 500 percent. These rumors are anxiously circulated throughout the country, where many households have seen their disposable income shrink in recent years. For those individuals who cannot manage ballooning utility costs, the cutting of subsidies may well cost Macri their support.

Many Argentinians fear Macri’s apparently authoritarian bent, which is understandable, since the country previously suffered under decades of military rule. The public psyche is still scarred by the “disappearance” of tens of thousands of enemies of the state during that time. Suspicions of Macri were strengthened by his seeming reticence to meet with leaders of a group representing the families of the disappeared. Only after significant criticism did he finally meet with them in February.

All of this means that Macri’s sweeping economic reforms are less impressive than they first appear. If he continues to alienate large portions of the population, it is conceivable that Macri will be unable to continue his reform process. More dramatically, his reforms could be repealed once he leaves the office.

Some cynical political analysts believe Kirchner has purposefully decided to step out of the limelight to leave Macri to deal with the fallout of her policies. Once Macri fails in his attempts to save the economy, Kirchner’s movement will triumphantly return to impose protectionism and populism anew, according to this theory. Whether or not this is Kirchner’s plan, what is true is that a botched reform process would strengthen the likelihood of a swing back to the left after Macri’s presidency.

Any investor looking at Argentina should closely monitor Macri’s domestic policies, even those that do not directly impact the country’s investment climate. If Macri does not take a more conciliatory approach at home, investors abroad should not be comforted by his reforms, which may ultimately turn out to be nothing more than fleeting. As long as Macri continues down his path of shock therapy, praise for him is not yet warranted.