The House Finally Debates the War in Yemen. But the War Will Go On. 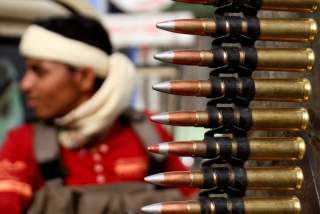 The civil war in Yemen is well into its third year, a conflict that UN officials and humanitarian officials have consistently labeled as one of the most detrimental, man-made disasters in the world. An astounding seventeen million people in the poverty-stricken Arab country are food insecure, which means that 60 percent of Yemen’s entire population doesn’t know whether they will be able to find dinner for the night.

Three million children and pregnant women are acutely malnourished; if they don’t receive some international assistance, there’s a very good chance that they will perish from starvation or sheer exhaustion. Perhaps the most disturbing statistic, however, is that nearly a half a million children under the age of five are severely malnourished. The violence that has shattered the country and the tactics that the combatants have used to fight the conflict have contributed to Yemen’s horrendous humanitarian crisis—a crisis that could be alleviated if hospitals and medical clinics were functioning or had the medicine and supplies to treat civilians streaming into their buildings.

Many Americans would find this situation appalling. Pictures of starving children and bombed marketplaces are incredibly disturbing images to see, but these are the types of photographs that have been streaming out of the conflict zone for years now. Equally appalling, however, is that U.S. participation in the war on behalf of Riyadh and Abu Dhabi is barely talked about in the nation’s capital. Many Americans don’t even know that the United States is involved—and has been involved—in the Yemeni civil war from the very start.

The U.S. Air Force has been providing the Saudi-led military coalition with the mid-air refueling assistance it needs to keep its aircraft in the sky. The U.S. State Department has negotiated arms deals with Riyadh that include the very munitions that have been used to kill civilians in indiscriminate attacks. Members of Congress have approved tens of billions of dollars worth of military equipment to the Saudis over the past few years, a significant quantity of which is no doubt diverted to the Yemen campaign. And all of this has occurred despite the fact that the U.S. Congress has never explicitly authorized U.S. military involvement in the war. Indeed, many lawmakers in both parties simply don’t want to engage in a war debate that could threaten their political careers.

To the congressional leadership’s credit, the House of Representatives recently debated a Yemen resolution on the floor that at least gave some minimal attention to the bloodshed in that country and America’s culpability in it. The resolution called “on all parties to the conflict to increase efforts to adopt all necessary and appropriate measures to prevent civilian casualties and to increase humanitarian access;” called on all parties to dedicate themselves to a political resolution to the conflict under UN auspices; and stated that U.S. military involvement was never explicitly authorized by Congress.

While a welcome step in the right direction, the bottom line is that the House debated a symbolic resolution that amounts to nothing but a distinguished press release from the body. Originally, the plan was for the resolution to receive privileged status under the War Powers Act, which would fast-track the issue to the House floor and compel members to vote on whether the U.S. military should withdraw its assets from the conflict. House Republican leadership quickly nixed that idea, stripping the bill of its privileged status but promising to allow the body to have a discussion about the Yemen conflict on the floor.

Reps. Ro Khanna, Walter Jones, Mark Pocan and Thomas Massie, the sponsors of the bill, got a raw deal from the congressional leadership. The House debate lasted for a grand total of forty minutes on a piece of paper that wouldn’t impact U.S. policy in Yemen even if it was passed (which it eventually did with a clear bipartisan majority). Although Khanna is correct that “the shift in our foreign policy is not going to happen overnight,” it’s difficult to categorize this entire ordeal as a shift. U.S. military and logistical aid to the Saudis will continue, more civilians will die, more hospitals will be bombed to the ground, and more children will be diagnosed with cholera. At the same time, Washington will continue intervening in a sectarian and regional-fueled proxy war that the United States has no business being involved in. It may seem harsh, but the mini-debate that took place in the House won’t make any bit of difference to what the administration’s policy is or how the Saudis conduct themselves on the battlefield.

There is a reason why Yemen has brought together strict constitutional constructionists, human-rights advocates, progressive lawmakers and realists of all stripes—constituent groups that would normally shy away from collaborating. For the progressive humanists, it’s about the disgusting, criminal tactics that all combatants in the war have used to pulverize their enemies and retake ground. For the constitutional conservatives, it’s about the fact that the war-powers clause in the U.S. Constitution has been ripped to shreds and the executive branch has tasked U.S. pilots with enabling a war that the people’s representatives have not authorized. For the realists among us, the Yemen tragedy is about the United States unconditionally renting its name, reputation, resources, and invaluable military aid to support a country in Saudi Arabia that simply doesn’t have the same core national-security interests in the region as the United States.

To all three groupings, there are no winners in this war—only losers who dig themselves deeper into a quagmire that will continue to go on for as long as the combatants believe they can win militarily.

Yemen’s civil war will likely get worse before it gets better. The Houthis, the internationally-recognized Yemeni government of President Abdu Rabbu Mansour Hadi, and his external backers in Saudi Arabia and the United Arab Emirates, have yet to feel the pain that would cause them to settle on a real ceasefire that lasts more than a few days and to put most of their chips into the peace talks the UN is trying to sustain. Even if a peace deal were to present itself, the war has killed so many civilians, ruined so much of Yemen’s public infrastructure, and pitted so much of Yemeni society against each other that it could be generations before the poorest nation in the Arab world recovers to its pre-war status.

But wherever the war takes Yemen, the United States should not be a part of it. The status quo is a detriment to what U.S. policy should be: that of a neutral power who exports food, water, medical kits and diplomatic talent from the State Department, not the bullets and bombs that ensure the war goes on.

Image: A pro-government fighter sits on the back of a military truck during clashes with Houthi fighters in the southwestern city of Taiz, Yemen June 2, 2017. REUTERS/Anees Mahyoub