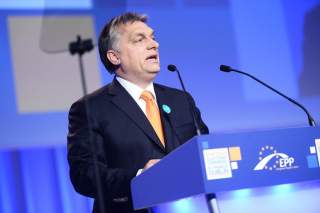 Globalization theorists and advocates frequently claim that like industrialization, liberalism, or capitalism, it is an irreversible juggernaut. Even North Korea and Cuba are increasingly subjected to pressures arising from the internet and the free flow of ideas. Imploding states like Libya and Syria still experience globalization all the time -- migrants and jihadis flow in and out, while militiamen upload videos on their smartphones.

And yet, on a recent visit to Hungary, I had grounds to question if this conventional wisdom applies everywhere. Could some countries buck the trend, successfully keeping people and ideas out?

Despite the ease of movement afforded by their EU passports, fewer Hungarian young people study abroad than five years ago; fewer are trilingual than a generation ago; the country's economy and political system are gradually reverting back to Soviet-style cronyism, after a brief flirtation with liberal democracy; free flows of investment capitalism have halted; and – most worryingly-- Hungarian ethnic nationalism deploys increasingly irredentist themes.

When I met some young desk officers of the Hungarian Foreign Ministry researching various patches of Africa, I learned that in addition to never having travelled to the countries they covered and not speaking any African languages, they were actually all Slovak citizens of Magyar origin. They obtained Hungarian passports so as to be able to work in the foreign ministry. Presumably, they enjoyed preferential access to bureaucratic jobs because Orban prefers his irredenta loyalists rather than educated Budapest elites (who likely have both independent ideas and too many dangerous contacts with the outside world).

That Hungary is a source of countervailing trends with Europe should come as no surprise. Hungary has always been a land of contradictions. When the country's magnificent parliament overlooking the Danube was built in the late 19th century, it eclipsed Westminster as the largest Parliament building in the world. And yet it was a neo-gothic farce: Hungary did not enjoy legislative sovereignty. Shortly after World War I, after evicting a short-lived communist putsch, Hungary became a kingdom without a king ruled by an admiral without a fleet. Today, despite being engrossed in territorial and ethnic conflicts with her Slavic neighbors, Hungary is the only EU-member state actively drifting into Putin’s orbit.

It should therefore come as no surprise that Victor Orban – Hungary’s autocratic president, occasionally dubbed the Victator – has seized upon the migrant crisis as a picture-perfect issue with which to assert Hungarian idiosyncrasies. His rhetoric resonates domestically. His successes could foreshadow the rise of the right across Europe as a popular response to widespread outrage over Eurocrats jamming starving Syrians into their old gymnasiums and tempting them to make the perilous journey with promises of language courses, food, and shelter.

This dissonance between left-leaning, pro-EU, humanitarian technocrats and how their preferred policies are likely to cause a rightward, anti-EU drift in popular sentiment has not been sufficiently explored. The migrant crisis of 2015 is exposing Europe’s inability to formulate a coherent coordinated response. But this time, the US isn't going to smash heads until the Europeans get their act together, and hence throughout August and September policy lurched between extremes, revealing the underlying domestic pressures facing each European regime.

No sooner than the German welcome mat was rolled out, than the Hungarian razor wire fence was built. Within weeks of Merkel’s bold humanitarian pledge to accept up to a million refugees, she was forced to announce that German’s absorptive capacity has been overwhelmed and that cash handouts will be scaled back. Conversely, even Hungary’s attempts to criminalize migration and deploy the army to protect the border, have occasioned their own backlashes. Yet, Orban has stood up to the international community and his neighbors, but sentencing some migrants in Kangaroo courts, deporting others back to Serbia, and increasing the razor wire fence to include the Croatian border.

The lack of sovereignty and democratic deficit at the EU level facilitates populism at the national level -- be it bleeding-heart humanitarianism or xenophobic scaremongering. Swedish and Germanic discourses demand tolerance and sharing the wealth, while Hungary’s feelings of historic victimization demand a strong stand against the decadent Western powers who are inviting dangerous racial mixing.

Discussing these paradoxes with one of Hungary’s leading private equity fund managers, I asked about the implications of the ongoing Ukraine crisis and the ensuing neo-Cold War on Hungary’s future prospects. Surprisingly, he told me that he worries more about anti-Semitism than Orban’s progressive embrace of Putin. Anti-Semitic, anti-migrant, and anti-EU rhetoric is simply bad for business, he explained. It scares away investors and tourists, facilitating the rise of inward-looking, nepotistic nationalists.

I wonder if Hungary isn't just experiencing in microcosm trends that will take roughly a decade to play out across the continent: Compassionate Eurocrats roll out the welfare state to help the world's most destitute. This in turn angers hard-working Germans and Finns who drift rightward and turn against further EU integration amidst an upcoming economic downturn. As if by some undiscovered Newtonian law, today's attempts at humanitarian internationalism are sowing the seeds for tomorrow's resurgent anti-globalization nationalisms.

Jason Pack is a Researcher of World History at Cambridge University and President of Libya-Analysis.com. ​You can follow him on Twitter at @JasonPackLibya.