The Illusion That America Can Fix Libya 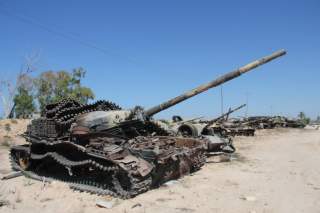 Will we ever learn? How many people will have to die, and how many more hundreds of billions of dollars will be squandered, before we get that long-distance social engineering does not work? One would think that the experience in Afghanistan and Iraq would be clear enough. It is fifteen years later, and we are still told that unless we send more advisers, more troops and more shiploads of cash, these nations will fall into the hands of the Taliban, ISIS, Iran—or their regimes will just collapse. Now comes a slew of mavens who argue that the fact that civil war is raging in Libya and that ISIS is finding a foothold there, is because we left after deposing Qaddafi. They say we should have stayed—or move now—to “stabilize” Libya.

From the left, Sarah Leah Whitson, director of the Middle East and North Africa division of Human Rights Watch, holds: “If you are going to carry out a military intervention to decapitate the government, you are making a commitment and you should be making a commitment to the stability of that country over the long haul.” From overseas, Jean-David Levitte, senior diplomatic adviser to former French president Nicolas Sarkozy, believes that “it was a big mistake not to stay. We should have helped them create a proper police force. As Colin Powell used to say to President Bush, you break it, you own it.” And former UK prime minister David Cameron holds that “we have to do as much as we can now – with I hope a willing Libyan population and politicians – to try and bring that national unity government together.” General David Petraeus acknowledges the difficulties involved but concluded simply that “what we did was certainly not enough.” The Washington Post finds that “pacification of Libya would probably require another Western intervention and a peacekeeping force, coupled with a far more robust international mediation mission.”

The notion that the United States can engage in nation building in the Middle East is a sociological illusion. The United States sank half a trillion dollars into nation building in Afghanistan and Iraq over fifteen years. In Afghanistan, it “succeeded” in transforming the country from one of the most corrupt nations in the world to the most corrupt. It has become the leading producer of opiates, which are flooding Europe. And it has a regime that cannot protect itself or pay for itself. In Iraq, since it was liberated by the United States, at least three hundred thousand civilians have been killed, many more maimed, and still more forced out of their homes. The military and the police trained and advised by the United States for over fifteen years are often used by the Shia government to kill and harass Sunnis.

The best way to show that these societies are not ready for nation building is to examine the conditions that existed in the two countries that the United States did succeed in stabilizing and turning into democratic societies—namely, Germany and Japan. Here are the sociological conditions that existed in these nations: full cessation of all hostility before any nation building, a high level of domestic security and local acceptance of the foreign occupation and the democratization drive. In addition, these nations had strong national unity, competent government personnel and a low level of corruption. Furthermore, they had strong economic fundamentals, including strong industrial bases, established infrastructure, educated populations, and vigorous support for science and technology, corporations, business and commerce. Their cultural values included hard work, high levels of saving, and other forms of self-restraint and capacity to defer gratification, essential for democratic development. Finally, the U.S. commitment to nation building, including provision of adequate funding and troops, was strong. Not even one of these conditions exists in the contested nations in the Middle East.

One cannot but wonder why anyone would hold that a much smaller U.S. force, with a much smaller budget, could achieve what the United States could not when the numbers were twenty times higher.

The United States should provide humanitarian assistance, offer peacekeeping forces to enforce settlements once the warring parties reach one, and leave the rest to the Europeans to mend. They got us into this mess, and they will suffer most from it. Time for them to learn the lessons of nation building.

Amitai Etzioni is a University Professor and Professor of international Affairs at The George Washington University. For more evidence, see his recently published book, Foreign Policy: Thinking Outside the Box.