The Indispensable Superpartner: How America Should Lead 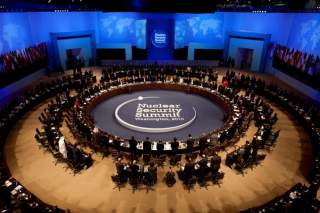 President Obama’s second and final National Security Strategy was released on Friday, setting the course for the administration’s last two years. Where it lacked in prescribing remedies for the world’s ills, it was strong in describing the current state of the global order. In essence, the strategy document outlined a world where power is diffusing from states to individuals and other non-state actors; where change is outpacing the ability to plan comprehensively; and where transitions in leadership within regions and among them is always altering.

But then the analysis breaks down into the usual, old-school ways of strategic thinking, looking for ways to improve our “security,” “prosperity,” “values,” and “international order.” While these are important, this is not the way twenty-first century America should be thinking about twenty-first century problems. And since the NSS aims to define “how” we lead instead of “if” we should lead, there’s an urgent need to chart a new course to deal with the new world as effectively and efficiently as possible.

To deal with the global security context of the still-new century, the United States should shift its strategic focus from being the “superpower” to instead becoming the “superpartner.” Doing so would allow the United States to better seek three “grand” goals over the coming years: 1) the maintenance of American centrality in global affairs; 2) the promotion of stakeholders in global stability; and 3) the mitigation of global risk. Let me explain each in full.

What does it mean to be the superpartner? In the most basic sense, a superpartner is an actor that can best play different roles in a network of state and non-state actors to solve global problems. The United States would serve as the hub of a continuously morphing constellation of actors that form and disband as needed to solve global issues when they arise. Indeed, the actors needed to deal with global health issues, for example, will certainly be different than the ones tackling global financial problems. The common thread between them will be central leadership of the United States, working to coordinate with allies, partners, and other actors as needed to get the job done. While this may sound like perpetual crisis response or, worse, ad hoc-ery, it is neither of those things. The United States already has the largest alliance and partnership structure in the world. Using that structure in a strategic fashion to solve problems as they arise will be one of the greatest imperatives for the United States in the twenty-first century.

Some may wonder why the United States would want to be a superpartner when it can continue to act like a superpower? The reason is that a superpartner has certain advantages over a superpower, and these will be needed in the new global arena. For one, much of the world’s enmity toward the United States stems from its outright dominance in world affairs. Choosing the principle of “centrality” as opposed to top-down global management will help curb anti-American sentiment.

Second, it will further strengthen the U.S. alliance and partnership architecture. By codifying America’s partnership with other actors, being a superpartner reinforces America’s role as a global security guarantor and friendly cohort in international order management. Third and relatedly, it creates incentives for our allies and partners to build up their own capabilities. The knowledge that the United States will not take care of all issues by itself will force other actors to strengthen their diplomatic, development, and military capacities. Being frank in saying that the United States will not solve every issue unilaterally will not undermine U.S. credibility or create a vacuum in the global order. It will simply lead to a different type of order.

So if the United States does become the superpartner, what goals should it seek to achieve? First and foremost, it should seek to maintain American centrality in world affairs. This does not necessarily mean that the United States should be number one—although it would certainly make things easier—but it does mean that it should seek to be central, or vital and necessary, to the conduct of world affairs. No problem should arise where the United States does not have some role, whether leading from the front or the wrongly-maligned behind. It should serve as the player that helps to organize and strategize among the states and non-state actors called in to solve the problem. The extent of the role the United States takes will naturally be up to the administration in power, but as a general rule America should be more forthright in leading when its vital interests are at stake while being willing to take a backseat when the issue at hand is of more interest to the others actors involved. Yet, the United States should always keep in mind that the goal is to remain central and ensure that its necessity does not fade away over time.

Second, the United States should promote stakeholders in ensuring global stability. So much happens in the world today that Washington cannot possibly do it all alone. And, even if the United States succeeds in being the world’s central player, it will mean nothing if its partners and allies are incapable of taking care of themselves, let alone protecting the global order. It is therefore important for the United States to not only help other actors become stronger in many areas of statecraft, but also to entice them to help maintain order where they are and with partners, allies, and a full range of state and non-state actors. At the same time, the United States must work uphold an order that other actors want to see persist. Indeed, setting the global rules of conduct is one example of an area where the United States would be a more forthright central leader.

Finally, because there will be an ever-increasing number of variables at play in global affairs, the best the United States can do is work with relevant actors in a central fashion to mitigate risk. Quelling these problems where they lie instead of allowing them to spread across the globe will be a central challenge of the twenty-first century. Trying to run all aspects of world affairs will be impossible and, therefore, impractical. That said, system management is possible if the United States works with its changing constellations to set the rules of the road, ensure that its partners support those rules, and punishes those who try to work outside of those rules. Anything beyond that would be folly and hurt U.S.interests in the long-run.

The United States must understand that, as Julianne Smith recently wrote on these pages: “the policy tools of the last seven decades…are largely outdated in coping with so many of today’s” challenges. A new strategy is therefore needed to deal with the future security environment. And while it is impossible to predict the future, the United States should still plan for it. Part of that planning should consider being a “superpartner” instead of a superpower and seek the three new goals outlined above as opposed to the usual suspects contained in the 2015 National Security Strategy. Not reconsidering the way the United States acts in this new world will only weaken America at a time when new forms of strength are needed.