The INF Treaty and Russia’s Road to War 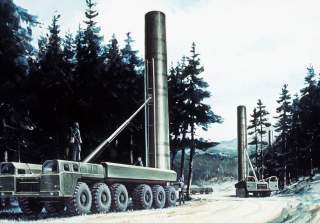 It may also be the case that the Russians are testing prohibited INF-range missiles as a warning to NATO: the Kremlin, including Putin and his military coterie, has never accepted the collapse of the USSR and the expansion of the West into former Warsaw Pact territory. (Just ask the Ukrainians.) These treaty violations may be a signal that they are looking, yet again, to decouple any regional conflict in Europe from the U.S. strategic deterrent by threatening European NATO with nuclear weapons, but without resorting to Russian strategic forces and thus averting a U.S. response.

It is also possible, to use a traditional term of strategic analysis, that the Russians are just yanking our chain to see what will happen. Putin’s Kremlin is now accustomed to the passivity of Barack Obama’s White House, and so the Russians may be violating the INF Treaty simply because they can. There’s really not that much of a military point in Russia’s tests, nor do they change the strategic calculus, because there isn’t anything the Russians can do with ground-launched cruise missiles that they couldn’t already do with other nuclear weapons in their inventory.

But if Moscow can shred a key arms agreement with no real consequences, the Russians will have succeeded in sending the message that America’s ongoing global disengagement now even includes NATO. At the least, turfing the INF Treaty is yet another way for Putin to show that he is dumping the entire post-Cold War settlement and that he intends to carve out a better deal than the one his predecessor, Boris Yeltsin, bequeathed to him.

At least where nuclear arms are concerned, the American response to this should be to do nothing, as paradoxical as that sounds. As Ambassador Steven Pifer and others have noted, if NATO, as some have suggested, starts arming its own cruise missiles with nuclear warheads and answers Russia’s INF violations in a tit-for-tat exchange, we will have succumbed to Moscow’s bait. We will end up not only legitimizing their abrogation of the treaty, but closing off opportunities for further talks.

Instead, the West should emphasize what the Russians fear most: NATO’s considerable conventional edge. Washington should accelerate the halting steps we’ve taken since the invasion of Ukraine and the seizure of Crimea, and work with our NATO partners to build up stronger conventional forces in Europe. If the Russians are keeping nuclear arms as insurance against losing a conventional war, it’s only because they still think they have some kind of a shot a conventional fight in the first place. We can close that loophole, and must, soon.

If we continue to adhere to the INF Treaty even as Moscow violates it, we will demonstrate our strength and confidence even as Putin and his cronies parade their paranoia. Putin is known, like many Russians, to hold former Soviet leader Gorbachev in low regard. When it came to stemming the tide of nuclear arms, however, Reagan and Gorbachev were stronger men, and his petulant violation of a treaty that made the world – Russia included – a safer place is testimony only to the weakness and insecurity of the men who govern Russia today.