The Interrogation of Saddam Hussein 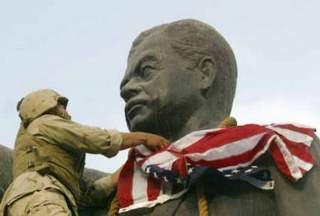 IN DECEMBER 2003, nine months into the U.S. occupation of Iraq, American forces seized the man who had been their number one target. Saddam Hussein, dictator turned fugitive, was finally captured. Like so much else about the U.S. expedition in Iraq beyond the initial invasion and overthrow of Saddam’s regime, there was little preparation or planning for how to handle the former despot once he was in custody. The prevailing assumption had been that the hunt for Saddam would conclude with him being killed, or killing himself. When he instead was captured alive, his interrogation became a matter of improvisation. At one point Saddam had to be moved to a different cell because in his first one he was losing sleep from the noise of small fry being moved in and out of the facility, resulting in him dozing off during the next day’s questioning.

At the time of the capture, John Nixon was a CIA analyst covering the leadership of the Iraqi regime. He had been in Iraq for two months on a short-term assignment, assessing information that might help in the search for Saddam. He was an obvious asset to throw into the breach, first to provide positive identification that the man the U.S. military had pulled from a spider hole on a farm near Tikrit was indeed Saddam Hussein, and then to begin questioning him. The identification was accomplished easily with the aid of such indicators as telltale scars and tribal tattoos. The questioning was more of a challenge, largely because of the lack of prior planning.

The FBI, as the U.S. government’s premier specialists in interrogating bad guys with an eye for both criminal justice and intelligence equities, would be given the main job of questioning Saddam. But the FBI did not have a suitable team in place in Iraq to do the job. Nixon and his CIA colleagues were instructed to start the process, then to yield to the FBI. When that would occur, and what topics should be the focus of questioning until then, were left vague. Based on Nixon’s account—whose role in the process appears to have lasted only a couple of weeks near the end of 2003, before returning to Washington—he and his colleagues nonetheless managed to collect useful information from their famous subject. The insight he acquired provides today’s readers with historical enrichment; whether or not it was helpful at the time for those coping with the occupation of Iraq is another question entirely.

MOST OF the first and second drafts of the Iraq War chapter of American history were written several years ago, and Nixon admits to initial difficulty in garnering interest in publishing his part of the story. But his portrait of Saddam and the conversations with him offer an engaging and insightful addition to that history. The author’s skills as an analyst, one who had been following and assessing his subject from afar, come through in his portrayal and interpretation of Saddam in the flesh.

Nixon highlights the qualities that enabled Saddam to rise to the top and retain power in the ruthless and bloodstained polity that Iraq has been ever since a coup overthrew the monarchy in 1958. Going on the lam after the U.S. invasion barely weakened those qualities. Saddam retained his swagger and his conviction that he was still the rightful president of Iraq. His political skills were constantly in evidence. A drab debriefing room in a prison was for Saddam just one more milieu in which he would size up everyone present and figure out how they might be manipulated. The debriefing sessions were jousts in which Saddam worked as much to find out what the Americans questioning him knew as the Americans were working to find out how much he knew.

Saddam also could turn on a politician’s charm. He did so at the end of Nixon’s last session with him, in which he gave the CIA analyst a five-minute handshake accompanied by soothing words about how he had enjoyed their time together and how Nixon should always be just and fair when working back in Washington. This seemingly amicable parting came despite Saddam’s ire during earlier sessions, when questioned about human-rights abuses and, especially, the use of chemical weapons to kill thousands of Iraqi Kurdish civilians in Halabja during the Iran-Iraq War.

How truthful was Saddam? He was not being coerced, beyond the fact of his incarceration. He had reasons to deceive and conceal, perhaps in the hope that his sympathizers still in the fight could eventually prevail over their adversaries and that the United States would give up. Barring that kind of turning of the tide in his favor, he probably knew that his eventual fate (which was the gallows) would not depend on how frank he was being with his interrogators. He clearly lied about some things. For example, he denied any Iraqi-sponsored plot to assassinate George H. W. Bush during a visit to Kuwait in 1993, even though the evidence was conclusive. Bill Clinton retaliated with a cruise-missile strike.

Most of what Saddam told his interlocutors, however, was probably true. When he did not want to reveal what he knew about a topic, he simply refused to answer the question. One of the advantages his interrogators had was, as Nixon puts it, that Saddam “loved to talk, especially about himself,” so much so that sometimes it was “hard to shut him up.” This trait went with the braggadocio and a genuine pride in what Saddam considered he had done to develop Iraq. The conversations yielded freely offered detail about Iraqi affairs from the perspective of the presidential palace—nothing miraculous, but a fleshing out of what was already known.

Perhaps somewhat surprising was how much Saddam appeared to be detached from governing during the last months of his rule and to have delegated important matters to subordinates, including planning resistance to a U.S. invasion. Saddam may have dissembled about this more than Nixon seems to believe, both to divert blame from himself and to avoid jeopardizing continued resistance to the American occupation. More plausible in Saddam’s comments, but also at odds with the common view of him as a firmly entrenched dictator, was his worry about internal opposition, both Sunni and Shia.

Although Saddam had been the master of Iraq and had an acute understanding of its internal affairs, the same cannot be said of his foreign-affairs acumen. His miserable record of launching failed wars is a case in point. His insular view probably contributed to Baghdad’s inability to anticipate American reactions and perceptions. Saddam was surprised by the American response to his seizure of Kuwait. He thought that 9/11 would draw the United States and Iraq closer together against the sort of Islamist extremists who had perpetrated that attack. And he thought that concealment of weapons-related files should have been accepted as what any sovereign state would do to keep prying foreign eyes out of what was none of their business. In fairness to Saddam, the U.S. side of this history could have perplexed more savvy observers as well. Saddam correctly discerned inconsistency in U.S. behavior, which zigzagged from a pro-Baghdad tilt during the Iran-Iraq War to, shortly afterward, characterizing Saddam as a Hitler-like aggressor. Furthermore, opposition to Islamist terrorism was indeed an interest he shared with the United States, even though the promoters of the U.S. invasion of his country would try to conjure up an “alliance” between his regime and Al Qaeda to muster public support.

Nixon also gives accounts of two subsequent Oval Office briefings on the unpleasant reality of post-invasion Iraq. George W. Bush and his senior advisers resisted the idea that anyone they considered their foes in Iraq, starting with Saddam himself, could have had any significant popular support.

During one of these briefings, Secretary of State Condoleezza Rice characterized Muqtada al-Sadr, the Shia cleric and militia leader, as “just a flake.” Nixon attempted to caution against underestimating Sadr, but was interrupted by what he describes as practically a scream. “Oh yeah? Well, I think we overestimate him! The man’s a thug and a killer, and the Iraqi people don’t want that,” the president of the United States interjected.

THE REST of the book is a memoir about the remainder of Nixon’s time with the CIA, coupled with some observations about how intelligence allegedly operated regarding Iraq and some now-familiar criticisms of the Iraq War. These portions are less insightful than the rest and betray the author’s narrow perch. They evince bureaucratic parochialism, rivalry and envy (although Nixon compliments the military component that served as Saddam’s jailers). There is boasting, for example, that “CIA analysts were the first and foremost proponents of focusing on bodyguards to find Saddam.” Nixon’s criticism of American political leaders is not limited to one party and extends into the Obama administration; he writes that Joseph Biden’s “grasp of foreign policy seemed shaky at best.” He knocks the experienced diplomat Christopher Hill, who became ambassador in Baghdad, for not having enough experience on Iraq.