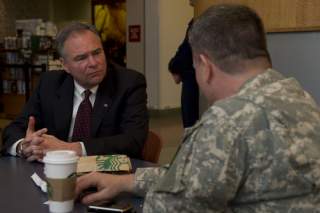 Tim Kaine, a Democrat who represents Virginia in the Senate, is on the warpath. Not against another country—but against America’s proclivity for launching wars without the assent of Congress. Kaine is not opposed to conflict and knows that America must defend itself from harm. But he also believes that it can be harmful to our traditions to ignore them. He reminds us that James Madison declared, “the constitution supposes, what the History of all Governments demonstrates, that the Executive is the branch of power most interested in war, and most prone to it. It has accordingly with studied care vested the question of war to the Legislature.” Kaine says that it is time to return to the wisdom of the founding fathers.

Together with a number of other senators—Robert Menendez, Barbara Boxer, and Ben Cardin—he has introduced legislation repealing the Authorization for Use of Military Force (AUMF) against Iraq that passed in 2002. Kaine also introduced legislation in January 2014 with Senator John McCain to repeal the 1973 War Powers Act. Kaine believes a new law should be passed by Congress that establishes much greater consultation between the executive and legislative branches.

Readers of the National Interest may recall that another former Virginia Senator, James Webb, wrote a cover story for the magazine in the March-April 2013 in which he decried what he saw as congressional abdication. Webb said,

In matters of foreign policy, Congress, and especially the Senate, was designed as a hedge against the abuses exhibited by overeager European monarchs who for centuries, had whimsically entangled their countries in misguided adventures. America would not be such a place. The Constitution would protect our governmental process from the overreach of a single executive who might otherwise succumb to the impulsive temptation to unilaterally risk our country’s blood, treasure and international prestige. Congress was given the power to declare war and appropriate funds, thus eliminating any resemblance to European-style monarchies when it came to the presidential war power.

For his part, Kaine believes that serious reform must take place. The vision of the founding fathers had it right. The executive branch will always have a propensity to engage in war. The legislative branch should act as a potential check. As Kaine observes, lawmakers are often only too eager to avoid difficult votes, a problem that Madison did not anticipate.

But do the abysmal popularity ratings of Congress suggest that Kaine’s project is ultimately ill-conceived? Would it be a recipe for further gridlock? Is an imperial presidency inevitable? And what prompted Kaine to embark upon this legislation?

These and other questions are eloquently answered in this interview by Kaine, a patriot and lawmaker who wants to recover American principles that have been progressively eroded over the past several decades.