The Iran Deal Is Dead. Now What? 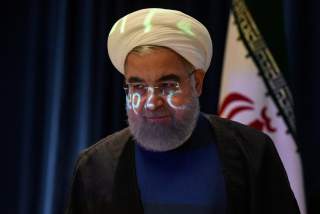 These days, it’s increasingly clear that the Iran nuclear deal is on life support.

For much of the past year, opinion within the Trump administration has been more or less evenly divided between those who support preserving the 2015 agreement (formally known as the Joint Comprehensive Plan of Action, or JCPOA) with some modifications, and those—including the president himself—who advocate its outright annulment. But no longer. Recent staffing changes at the upper echelons of the administration have swung the pendulum decisively in favor of Donald Trump “nixing” the agreement at the earliest possible opportunity.

That could be as early as next month, when the deal comes up for periodic renewal pursuant to the Congressionally-mandated Iran Nuclear Review Act. U.S. and European negotiators, now working feverishly in Washington and assorted European capitals, may yet find “fixes” sufficiently robust to salvage the agreement, at least temporarily. But all things being equal, it’s a reasonable bet that, come this May, the president will decide not to recertify the agreement and allow the central foreign policy achievement of the Obama administration to lapse.

The operative question is: what comes next? Despite Trump’s October 2017 announcement of a “comprehensive” strategy to counter the contemporary threat posed by Iran, his administration has done little by way of outlining how it plans to confront Tehran’s increasingly aggressive regional behavior. Nor have administration officials yet mapped out a clear strategy for “the day after” the JCPOA, in terms of future U.S. policy toward the Islamic Republic.

Such an approach is now the subject of intense scrutiny across the federal bureaucracy. As U.S. officials prepare for a probable exit from the JCPOA, they should be focusing on at least three distinct priorities:

Nearly three years after the passage of the JCPOA, it is clear that that agreement has facilitated a landmark expansion of Iranian activity and activism throughout the region—with dramatic results. Iran has progressively erected an imperial project that now encompasses no fewer than four regional capitals (Beirut, Lebanon; Damascus, Syria; Baghdad, Iraq; and Sanaa, Yemen) and entails a zone of territorial control stretching from territorial Iran through Iraq into Syria and Lebanon.

This sphere of influence has been buttressed by the emergence of a new phenomenon: an ancillary Iranian foreign legion. Since the passage of the JCPOA, an expeditionary force of Shi’ite irregulars drawn from places such as Iraq, Pakistan and Yemen has been conscripted into service by the Islamic Republic and sent to fight in support of Syrian dictator Bashar al-Assad. The size of this contingent remains the subject of some dispute. Syrian regime officials have boasted that there are now “more than 50,000” such militants fighting on its side. Israeli estimates peg the size of Iran’s new irregular force as considerably larger, some 82,000. But some scholars have concluded that the real size of this jihadi legion could be more than double that number, when both active fighters and reserve forces are taken into account. What is clear is that this “Shi’a Liberation Army” is under the direct control of Iran’s clerical army, the Islamic Revolutionary Guard Corps (IRGC), and serves as a significant force multiplier for the IRGC’s regional mischief.

Iran’s military power isn’t just strengthening in a conventional sense, however. Iran is rapidly expanding its strategic capabilities as well. Thanks to the Obama administration’s fateful decision to leave ballistic missiles out of the scope of the Joint Comprehensive Plan of Action, international restrictions on Iran’s missile development have been loosened, resulting in an increasingly capable and formidable Iranian strategic arsenal. Iran is now flexing its muscles in cyberspace as well. In its latest study of global cyber threats, the Mandiant Corporation, a leading cybersecurity consultancy, outlined how Iran is becoming “the new China” in cyberspace—a persistent and prolific threat actor that is rapidly increasing in both technical sophistication and ambition.

In its October 2017 Iran strategy, the Trump administration outlined as its primary objectives the need to counter Iran’s destabilizing regional behavior and to curtail the threat posed by its expanding strategic capabilities. Doing so, however, will require addressing Iranian behavior on all three of the above levels—by more actively targeting Iranian irregulars, in Syria and elsewhere; with the deployment of supplemental missile defenses designed to defend regional allies from Iran’s burgeoning missile force, and; through the creation of a robust cyber deterrent posture designed to dissuade Iranian cyberattacks and malicious hacking.

Perhaps the greatest casualty of the Obama administration’s 2015 nuclear pact with Iran was the international sanctions regime that had been painstakingly erected by previous administrations over the preceding decade-and-a-half. As a result of the nuclear negotiations between Washington and Tehran, that regime—and the international coalition underpinning it—has been badly (although not irreparably) damaged. Reconstructing this architecture of multilateral economic pressure consequently needs to be a top priority of the Trump administration if it hopes to isolate the Islamic Republic anew.

Rolling back the immediate benefits of the nuclear deal is a very good place to start in this regard. As a result of the JCPOA, Iran is estimated to have gained access to more than $100 billion in previously-escrowed oil revenue located abroad. The Iranian regime, in turn, has accessed some of these funds to fuel its military modernization and regional adventurism. But a portion—perhaps a significant one—remains accessible in various foreign jurisdictions (such as Macao, Singapore and Turkey). The Trump administration should focus on ways by which it can “refreeze” these accounts as an immediate method of cutting off Iranian access to excess cash, and pressure its international partners to do the same.

A second priority must be to target the economic footprint of Iran’s Revolutionary Guards. The IRGC is far more than merely a national army; within Iran, it is an economic powerhouse, in control of hundreds of companies and corporate entities. All told, experts estimate that the IRGC directly or indirectly controls a third or more of Iran’s national economy. Consequently, reducing the economic power of the IRGC is central to any serious strategy toward the Islamic Republic. The United States can begin to do so through a variety of measures, including by designating Iranian economic sectors dominated by the IRGC (such as telecommunications, construction, and mining) as specific “sectors of concern” and pressuring foreign countries and companies involved in those areas to cease their business with Iran.

The White House likewise must make it a priority to blacklist IRGC-linked commercial actors. These include entities like Iran’s national airline, Iran Air, which was “de-designated” by the Obama administration as part of its nuclear negotiations with Tehran, and which today serves as a key carrier of Iranian troops and materiel into the Syrian theater. By re-imposing a blacklist on such actors, the United States can help limit their access to key U.S. technology and impact their ability to serve as enablers for Iran’s regional aggression.

Finally, the long-term success of U.S. economic pressure against Iran depends on America’s ability to adapt to changes taking place in the Iranian economy. Already, there are signs that Iran’s leadership is implementing significant steps in anticipation of a reinvigorated sanctions regime—including by relaxing its traditionally-skeptical approach to cryptocurrency. In recent weeks, Iranian officials have floated plans to create a national digital currency of their own as a means of insulating the national economy from prospective future economic penalties. To a significant degree, the effectiveness of new U.S. sanctions will depend on whether they can successfully continue to target and isolate Iranian funds as they migrate into new domains and take new forms.

Thirty-nine years after Khomeini’s Islamic Revolution, Iran’s repressive clerical regime is increasingly reviled by the population it purports to represent. The protests that rocked the Islamic Republic earlier this year laid bare the depths of popular discontent among ordinary Iranians with their government’s regional adventurism, its lack of prosperity-building at home, and its radical, unrepresentative nature. While the Iranian regime predictably cracked down on that uprising, sporadic protests continue to take place—suggesting a fundamental rupture between Iran’s clerical elite and the country’s captive populace.

Notably, it has already begun to take preliminary steps in this direction. During the most recent protests, administration officials figured prominently in the media, voicing their support for the protesters and urging restraint on the part of the Iranian regime. Since then, the White House’s most recent Nowruz (Persian New Year) message took this support one step further, explicitly denouncing the Islamic Republic’s internal corruption and rogue regional behavior.

Such messaging undoubtedly represents a good start. But sustained contacts with the Iranian people requires significant upgrades to America’s existing mechanisms of official outreach—including much-needed changes to the substance and style of the America’s primary communication vehicles toward Iran (the Voice of America’s Persian Service and RFE/RL’s Radio Farda), as well as an overhaul of the corporate body that oversees them, the U.S. Broadcasting Board of Governors. Most of all, however, it will require the administration to formulate a coherent, sustainable message meant to empower ordinary Iranians and diminish the authority of the Iranian regime—and then send senior government officials to deliver it across a broad range of mediums.