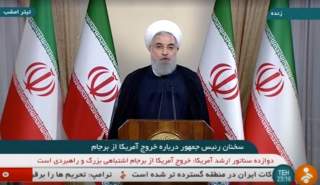 This last point has often been the missing ingredient in U.S. policy towards Iran. President Obama cast the JCPOA as part of a binary choice that would lead to either war or peace, with nothing in between. Even now, alarmists claim withdrawing from the deal or confronting Iran would place America on the path to war with yet another large Middle Eastern country. But this is a false choice- there’s already enough hostility between the two countries to have started multiple conflicts over the last few decades but deterrence has prevailed. Only once did the United States physically wage open warfare against Iran and that was thirty years ago. Finally, and more importantly, Iran’s aggressive behavior alone assured war would always loom on the horizon, whether or not the JCPOA was implemented in the first place.

America has options that do not involve taking a hands-off approach to Iran or invading and occupying it. While the risk of a major conflict should never be dismissed, no nation in the Middle East, Iran included, is spoiling for a fight if they do not have to directly participate. The sheer number of non-state militants, terrorists, mercenaries, and unconventional forms of warfare have created a unique environment where all participants can express their disdain for one another without having to throw a single punch themselves. As cynical as this sounds, it means the United States and its allies can fight back against Iran without having to lob a single cruise missile towards Tehran. And if instead the U.S. ever had to launch such an attack, it is ready, as always.

In 2015, Democratic presidential candidate Jim Webb broke with his party by expressing opposition to the JCPOA, stating the deal was “accepting the eventuality that [Iran] will acquire a nuclear weapon.” History will be the judge of the validity of this remark. But, even if one were to assume good faith on the part of everyone who negotiated and signed the Iran deal, either the JCPOA merely delayed Iran’s quest for nuclear weapons at great cost or it was a gamble based on the misguided belief better relations would arise in its wake, thus ending Iran’s nuclear quest.

If the answer is the latter, then it was quite a gamble with billions of dollars and the lives of millions at stake. If history proves Iran to be after nuclear weapons after all, the irresponsibility to pursue the JCPOA should be treated with the same level of disdain and skepticism directed towards the decision to waste thousands of American lives in Iraq based on flawed premises.

Edward Chang is a freelance defense, military and foreign policy writer. His writing has appeared in the National Interest and War Is Boring.