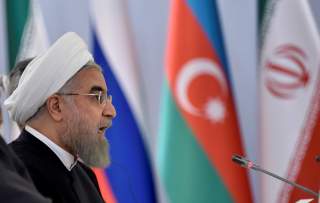 When President Donald Trump announced on May 8 that America would be withdrawing from the Iranian nuclear deal—officially known as the Joint Comprehensive Plan of Action (JCPOA)—he created an international furor. Tensions have flared in the Middle East after both Trump’s announcement and America’s official opening of its embassy to Israel in Jerusalem. The withdrawal from the JCPOA saw crowds of Iranians protesting against America and the embassy move saw protests, rioting and the shooting of fifty-eight Palestinians who attempted to cross the border into Israel.

To assess the implications of the American withdrawal from the Iran deal, the Center for the National Interest convened a panel moderated by Zalmay Khalilzad, the former ambassador to the United Nations, Afghanistan and Iraq. The panel discussed a variety of topics, including the possibility of salvaging the JCPOA, if Iran would leave it, whether war is likely, if United States would impose sanctions on European companies in Iran and how that might impact transatlantic relations.

Paul Pillar, a professor at Georgetown University and former National Intelligence officer for the Middle East region, argued that there was a chance of saving the deal. He suggested that so far Tehran “will explore as far as it can with the remaining five members keeping some version of the JCPOA in place.” Pillar also said that if he was “to lay odds right now” on whether the deal would be standing minus the United States in one year that it would be “somewhere around one chance in three and two chances in three that we won’t.”

Dov S. Zakheim, the Vice Chairman for the Center for the National Interest and former Under Secretary of Defense under President George W. Bush, argued that the odds ought to be flipped: “There’s a 66 percent chance that this thing can be saved.”

The question, of course, is how this could be done. After all, maintaining the JCPOA would require the reentrance of the United States or a lot of heavy-lifting by the parties still in the agreement to keep it going. The permanent members of the Security Council—Russia, China, the United Kingdom and France—are the remaining parties, including Germany.

Some experts have argued that any number of these remaining signatories could seek to prompt Iran to adhere to the nuclear deal, especially if they offered major financial incentives or made side agreements that addressed some of Iran and America’s mutual security concerns. For instance, Pillar believes that Europe is determined to make the JCPOA work since the deal “has been working as certified by the IAEA, ” and that is sufficient for the Europeans. Another approach might be for European allies to seek agreements that reduce Iran’s ballistic missile program or that extend the sunset clauses in the original JCPOA.

Zakheim suggested that the only way to salvage the deal would be for Trump to delay the implementation of secondary sanctions. Otherwise, he suggested, NATO might be in serious trouble. According to Zakheim:

He could do what he’s doing on tariffs, which is to say, first he imposes them, then he moderates them, lifts them, cuts deals about them. The bark seems to be much greater than the bite every single time. And so if he did the same thing with secondary sanctions… that gives everybody a little more breathing room. It allows the [Iranian] President to turn around to the crazies and say “Wait a minute this thing might still work he [Trump] hasn’t done what he said he would do.”

However, another dilemma is whether or not Iran would even be willing to remain in the deal or to trust America again anytime soon. Russia’s ambassador to the United States, Anatoly Antonov, was in attendance at the event and said that he didn’t think the deal would survive. The ambassador stated:

Of course we are deeply disappointed by U.S. President Donald Trump’s decision to unilaterally give up commitment to the JCPOA... [I]t seems to me that sometimes the administration decides to take some bad experience from the Soviet Union. If you remember the slogan of the Soviet Union, “first we destroy, the second we create.” What we see now? First let’s destroy Iranian deal, and then let’s create something special. What does it mean something special? It’s not clear at all. Who will start such negotiations?... As to me, as to Russian side, we are satisfied with what Iran is doing with IAEA.

The question of whether Iran will stick to the deal now that the United States is gone also remains. The key, panelists said, is whether Iran will decide that it is safer to come to an agreement with the Europeans on keeping the JCPOA or if its leaders determine that building a bomb is now the only way to protect their country. After all, America has attacked other countries that have given up their nuclear weapons after promising not to—Libya and Iraq—why would Iran believe the United States will refrain from regime change now? Both panelists agreed that America has lost international credibility by withdrawing from the Iran deal.

Pillar warned that, “The risk of a military clash… is greater today than a year ago.” He believes there is a risk that America could conduct military action against Iran for allegedly restarting its program. Finally, Pillar also noted that war could break out due to miscommunication since the diplomatic channels cultivated under the Obama administration no longer exist.

The JCPOA did decrease the amount of time it would take Iran to build its first rudimentary nuclear bomb if it wanted to. Before the deal, Pillar said, Iran was only a few months away from building a bomb; now it would take them a year. He added, “Iran withdrawing doesn’t mean immediately spinning up thousands of centrifuges.” In Khalilzad’s view, “I think the option of [Iran] cheating a little bit or getting out of the agreement a little bit, may be the most unlikely because if they don’t abandon the agreement all together or violate or renounce some parts of it, that would increase the pressure on the Europeans to respond and to perhaps impose sanctions.”

The panel also maintained that a bombing strike on Iran would be antithetical America’s national interest—even though the administration might decide on one. Jacob Heilbrunn, editor of the National Interest, asked, “Why not bomb Iran and declare victory whether it is or not?”

Both Zakheim and Pillar responded to these apprehensions by arguing that regime change doesn’t work, that it would consume too many lives and resources to really accomplish anything, and that there’s no way to know whether or not a successor regime might be just as hostile as the current one—if not even worse. A more optimistic verdict closed the event. “[Trump] starts very big, he may be very tough, he makes statements which may sound outrageous, and then he comes back with a pragmatic solution. And you judge him not by the beginning story, but by the conclusion,” said Dimitri Simes, President and CEO of the Center for the National Interest.

John Dale Grover is an assistant managing editor at the National Interest. Follow him on Twitter @JohnDaleGrover.