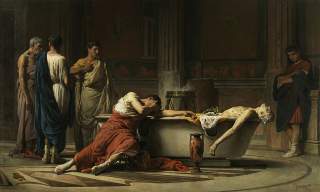 THERE ARE memoirs that pose as histories and histories that pose as memoirs. Peter Stothard’s The Senecans is a bit of both and a little of neither. Most of the adult memories he shares in it are inextricably intertwined with recent British political history, as are most of the characters he describes. On the other hand, the history is all seen through the personal sensibilities of the author, those of a very talented—and even more ambitious—son of the English lower middle classes who developed a love of the classics and a taste for journalism during his Oxford years. The Senecans is also a literary exercise of sorts, described by at least one critic as “stylish.” And so it is: stylish in the sense that its author seems, above all else, to be concerned with cultivating a neoclassical image or style for himself based on books he has read and figures from antiquity he feels akin to. In this sense, both he and his book are derivative, exercises in emulation rather than originality—just as much (though not all) of the work of Seneca, the Roman philosopher inspiring the title, was an imitation or synthesis of earlier Greco-Roman thinkers.

Stothard spends a great deal of time in The Senecans striking philosophical, world-weary poses after a career spent courting power and prestige. While this occasionally makes him come across as more than a little affected, it by no means detracts from the interesting nature of the events he has witnessed and many of his insights into them. It is also conclusive proof that, while you can take the journalist out of politics, you can never really take politics out of the journalist.

Witness the opening words of The Senecans:

Believe me. I was serious twelve years ago when I said that I was going to stop writing about politicians. . . . I made a promise to myself when I stopped being the Editor of The Times. I promised to go back to what I did before I was a journalist at all, back two thousand years to books and cities of books, to Naples, Alexandria and here [Cordoba], beside a Roman bridge over the slow, brown water, in Roman Spain. There seemed no reason that Margaret T, her heirs and successors, would ever trouble me again. Twenty-five years with them was enough.

I meant it too when I said I was never going to write one of those “memoirs of the print trade” that I have occasionally enjoyed.

Wrong on both counts, but Stothard has a classical alibi.

When I arrived yesterday . . . my aim was to finish a book which stars an ancient Roman, a writer who was born in Cordoba around the time when BC turned to AD. Lucius Annaeus Seneca was his name. . . .

So Seneca is much on my mind, his arguments, Stoic arguments as they are known, small questions about cold water, travel and alcohol as well as the big questions, how to survive in dangerous times, how to live a good life in even the worst of times. I found him first when I was young in the 1960s and secondly when Margaret Thatcher was in power almost 2,000 years after his death.

The stylistic trick Stothard now pulls off is the opposite of the familiar device of producing Sophocles or Shakespeare in modern costumes. The Senecans tells a tale of modern British politics clad in ancient Roman trappings, a story which

stars four courtiers of the Thatcher age. That is my aim, a portrait of lesser characters who can sometimes shed light on the greater. Their names are enough for now: David Hart, Ronald Millar, Woodrow Wyatt and Frank Johnson. All served Margaret Thatcher in different ways.

ALL FOUR of this rather motley crew of Thatcherites are now dead. For better or worse, this allows Stothard to write about them without fear of contradiction. Having known two of the four—Frank Johnson well and David Hart only casually—I found his treatment of both of them fair, if a little condescending, and his likenesses quite recognizable.

Throughout the 1970s and into the late 1980s I visited London at least twice a year, usually for two weeks at a time. As an aide to presidents Richard Nixon, Gerald Ford and Ronald Reagan during much of that period, and an occasional contributor to English publications like History Today and the Spectator, I naturally saw a lot of Tory journalists and politicians, beginning in the days of Ted Heath and throughout the longer, much more consequential era of Margaret Thatcher. In fact, I was there when the Iron Lady was voted into power in 1979. I vividly recall following the early results—posted in handwritten entries on a large blackboard—at the Reform Club. Once the initial returns had made it clear that Labour was out and the Tories were in, I left the club to drop in on a few victory celebrations. I distinctly remember a crisp, cold breeze blowing down Pall Mall, a chilly harbinger of change that certainly proved true: winds of change with a vengeance.

At that time I already knew Frank Johnson. He was one of several rising young journalists who would make their names at the Daily Telegraph before moving on to other things. John O’Sullivan was another of them, afterwards a speechwriter for Thatcher and the principal collaborator for her memoirs. But Frank was the one who most exuded naked ambition. Like myself, he was an autodidact. Unlike myself, he was born into a milieu keenly aware of, and not a little touchy about, its social origins—what would then have been called an English “working-class” family from a few hints he dropped. Frank was remarkably intelligent and had an equally voracious appetite for knowledge and status, generally with more attention given to ends than means. He once boasted to a mutual friend that he had intentionally encouraged the heavy drinking of a talented colleague to make him less competitive. There was an unappealing mixture of vanity and insecurity in his makeup, but he was also a first-rate writer—not just another Fleet Street hack—and great fun as a conversationalist. Frank’s political convictions were grounded on his sometimes idiosyncratic but always serious and thoughtful interpretation of history.

David Hart was an altogether different matter, what used to be described as a “rum character.” He was one of those marginal political enthusiasts who are constantly trying to draw attention to themselves by affecting an air of secrecy and mystery. A shady, big-spending money man who may also have been bankrupt, he was, at least by his own accounting, a one-man “independent” campaign operation for Mrs. Thatcher during her early and middle years in power. There was more than a touch of Gordon Liddy to David Hart, and one was wise to take anything he said cum grano salis. But his ostentatious life style, complete with a country seat in Suffolk and a lavish entertainment budget, allowed him to wine and dine many a more prominent Tory figure than himself, most of them apparently convinced that—Milton Friedman to the contrary—there really was such a thing as a free lunch . . . and free breakfast, dinner and weekends in the country. One of the more Alice in Wonderland episodes in The Senecans takes place in the kitschy “Garden of Eastern Peace” Hart added to his estate, “a circle of seats and Buddhist statues, all set at a sympathetic distance from where he landed his helicopter. This suited the prophetic and philosophical part of his nature which, he said, was too often misunderstood.”

That afternoon, two of his friends were in the Peace circle, Edward Teller, an elderly American known as “Father of the H-bomb” was arguing with Vladimir Bukovsky, a former guest of the Soviet Gulag, about the best way to deal with Mikhail Gorbachev. . . .

Teller talked about the “nationalist Russian adversary whose nature was manageable by tough, traditional diplomacy.” Bukovsky preferred “helpless leader of an alien inhuman state.” Teller wanted “Reagan to be Reagan.” Bukovsky wanted desertion from Soviet armies and the arming of their Islamic enemies. . . .

David too was enthusiastic for teaching Islamic Russians to use American missiles. That was the consensus of the Peace Garden. Only Teller seemed opposed. We could say he showed the greatest prophetic wisdom of the afternoon.

The third member of the Senecan quadriga was Woodrow Wyatt, whom I was fortunate enough not to know. The worst sort of tuft-hunting, time-serving conservative pundit, his happiest day was probably the one on which decades of touting and groveling were finally rewarded with a life peerage, an honor as hollow as his achievements, but one that allowed him to abbreviate his signature to “Wyatt,” as in Lord Wyatt. One suspects that he managed to wangle free stationery featuring his new, nonancestral crest. Stothard makes no real effort to conceal his low opinion of Wyatt, who serves as a comic reminder of everything one would rather not have in a political supporter.