The Islamic State's War on Al Qaeda Heats Up 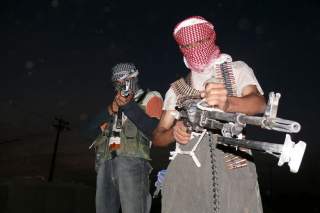 The latest edition of Dabiq, the flagship publication of the group that calls itself the Islamic State (IS), includes an eviscerating, accusation-laden polemic against al-Qaeda’s central leadership in Pakistan’s Federally Administered Tribal Areas (FATA). The article, titled, “Al-Qa’ida of Waziristan – A Testimony of Within,” was written by Abu Jarir al-Shamali, an al-Qaeda commander who spent around seven years in an Iranian prison followed by three years in FATA, and defected to IS earlier this year (some media reports claim al-Shamali actually spent the immediate post-9/11 years in Iraq rather than Iran).

Al-Shamali’s salvo, which is perhaps unprecedented in its detail and airing of dirty laundry, is the latest in the public war of words between al-Qaeda and IS that has been taking place for much of the past year. One pro-al-Qaeda commentator speculates that the article could lay the groundwork for takfir (excommunication) of al-Qaeda’s central leadership by IS.

Al-Shamali’s account is a striking attempt at offering an alternative narrative of the global jihad to counter the one shaped by al-Qaeda. His revisionist narrative places Abu Mus’ab al-Zarqawi, the founder of al-Qaeda in Iraq (the progenitor of IS), at the center. Al-Zarqawi, according to al-Shamali, isolated himself in Afghanistan from the doctrinally impure jihadists of al-Qaeda and the Taliban. Al-Qaeda, rather than being the vanguard of the global jihad, has been an irja’i group, or one that works in the service of current infidel regimes. Bin Laden may have had his heart in the right place, according to al-Shamali, and the 9/11 attacks demonstrated the “truthfulness in his soul,” but he had to be convinced to declare the rulers of Saudi Arabia as apostates and later wrongfully resisted the implementation of shari’ah (Islamic law) in Pakistan.

Al-Shamali also attempts to counter the idea of Khurasan (a historical area encompassing Afghanistan and Pakistan’s Pashtun border regions) as the locus of the global jihad today. Mullah Omar, the Afghan Taliban leader, he says, is unworthy of making the oath of allegiance to as he’s not only made many jurisprudential mistakes, but has also implicitly recognized the nation-state system. Pakistani jihadists, according to al-Shamali, have been weakened by the Pakistan Army’s operations in North Waziristan and fractured by collaborators and provocateurs associated with Pakistani intelligence. Waziristan, he says, was always far from being an ideal land to establish an Islamic state. Tribalism remains dominant; and even when the Taliban dominated there, local students still attended government schools. Migrating to Khurasan, al-Shamali warns, places sincere jihadis “between the hammer of nationalism and anvil of tribalism in Afghanistan and Waziristan.” [this appears to be a play on words of an al-Qaeda statement entitled, “Between the Hammer of the Jews And Crusaders and the Anvil of the apostates.”]

Ultimately, al-Shamali’s grievances stem from al-Qaeda’s strategic restraint. While al-Qaeda, like IS, is a takfiri jihadist group—meaning that it makes rampant use of takfir, or excommunication, against fellow Muslims, thereby legitimizing violence against them—it has also been eclectic and pragmatic in some ways.

Al-Qaeda, al-Shamali alleges, tried to convince the Pakistani Taliban to delay the implementation of shari’ah in the Swat region of Pakistan in 2009 out of fear that the population was not yet ready. It has long associated with non-Salafi jihadist groups in South Asia, namely the Sunni Deobandi groups—such as the Afghan Taliban and Harkat-ul Jihad al-Islami—that form the majority of jihadist groups in the region. Salafis like al-Shamali view the ‘aqeedah (creed) and manhaj (methodology) of non-Salafis like the Deobandis to be incorrect and deviant. And al-Qaeda has also attempted to leverage secular causes and movements. Bin Laden, in his latter years, issued a statement on global warming. His successor, Ayman al-Zawahiri, spoke in positively (albeit with major caveats) about the Arab Spring, which al-Shamali decries.

Perhaps embittered by his time in an Iranian prison, al-Shamali angrily condemns al-Qaeda’s soft approach toward Iran and Shias. He says that a senior al-Qaeda official demanded that he refrain from using the pejorative term “rafidhi” (rejectionist) toward the Shia. Both Bin Laden and al-Zawahiri, for strategic reasons, avoided conflict with Iran.

As outsiders in South Asia, al-Qaeda has had to make compromises in order to operate in a religious and jihadist climate quite different from that of the Arab world. In contrast to the Gulf Arab states, Salafism—often referred to pejoratively as Wahhabism—has little appeal in South Asia. Most militant groups come from the Sunni subsect known as the Deobandis. Some of them may become Salafized, especially after interaction with Arab jihadists. But in the end, even Maulana Asim Umar and Ustad Ahmed Farooq, extreme Deobandi jihadists who now form the core of al-Qaeda’s South Asia affiliate, are dismissed by al-Shamali as “Sufis.”

Al-Shamali does write positively of some Pakistani and Pakistan-based jihadist groups, including factions of the Tehreek-e Taliban Pakistan and the Islamic Movement of Uzbekistan. But ultimately, it’s clear that unlike al-Qaeda, IS will only collaborate with Salafi jihadists in South Asia. Unless IS is able to fracture Lashkar-e Taiba, South Asia’s major Salafi jihadist group, it will be unable to meaningfully penetrate the region.

As the al-Qaeda-IS rhetorical war heats up, takfiri jihadist networks in South Asia, where al-Qaeda has been based for the past two decades, continue to fracture and engage in more pronounced public criticism of one another. For the first time ever, al-Qaeda has criticized attacks by the Pakistani Taliban publicly. In November, al-Qaeda’s South Asia affiliate indirectly condemned the attack by the Jamaat-ul-Ahrar faction of the Tehreek-e Taliban Pakistan on Pakistani spectators watching a ceremony on the border with India. And in December, al-Qaeda and the Afghan Taliban explicitly condemned the massacre of students at a school in Peshawar by the Fazlullah faction of the Tehreek-e Taliban Pakistan.

As several of the documents seized at bin Laden’s compound in Abbottabad demonstrate, al-Qaeda has had major issues with the behavior of the Pakistani Taliban, especially when the group targeted civilians. But until late 2014, that criticism had been made privately. With the targeted killings of bin Laden as well as major Pakistani Taliban leaders, takfiri jihadist networks in South Asia are effectively anchorless. Al-Qaeda still functions in the region. Al-Shamali alleges that it ordered a retreat of jihadists from North Waziristan (as part of an insidious plot to redirect them to Syria and supplant IS). But the nodes in the networks are increasingly distant from one another. And so just in the same way as al-Qaeda and IS trade fire in a battle for the vanguard of the global jihad, the acrimony is likely to grow in South Asia.

Without a jihadist leadership that is capable of melding authoritativeness with charisma and quiet pragmatism, there is little to countervail the self-destructive nature of takfiri jihadism. The excessive use of takfir gives these jihadist groups the license to commit violence against large swaths of Muslims, including fellow jihadists deemed by most Muslims as extremists. But takfir is a double-edged sword. The practice may soon be used against the takfiri al-Qaeda by IS; and a small jihadist faction in Iraq has engaged in takfir card of IS. This unyielding search for purity in doctrine and practice ultimately alienates Muslim populaces that may have initially welcomed them and induces schisms that manifest themselves violently.

Takfiri jihadism is likely to bring about its own demise well before it even remotely poses an existential threat to the West. But prior to cannibalizing itself, it will have taken the lives of hundreds of thousands of Muslims in the process, incited hate between the Muslim sects, and wiped away communities of non-Muslims communities native to the Middle East. These are indeed calamities. But the lasting effects of takfiri jihadism will be from what it destroyed in the Muslim world, not what it built.

Arif Rafiq (@arifcrafiq) is president of Vizier Consulting, LLC, which provides strategic guidance on Middle East and South Asian political and security issues. He is also author of a new report on the resurgence of Sunni-Shia sectarian violence in Pakistan.