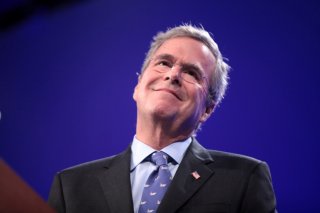 Jeb Bush’s stunning collapse in Wednesday night’s debate was an apt symbol of the 2016 Republican presidential race so far.

For all the talk of the combined vote share going to candidates like Donald Trump and Ben Carson, individually they are polling little better than Pat Buchanan in 1996. The real story is the weakness of the Republican establishment, perfectly illustrated by Bush’s stunning ineptitude at connecting with the primary electorate either on the campaign trail or the debate stage.

Fifteen years ago, Jeb’s brother George W. Bush brought the party establishment to the peak of its power by marrying it to the Christian right. With the support of social conservatives at the grassroots level and just enough conservative elites, Dubya was able to prevent a viable challenger from emerging to his right. His victory over John McCain wasn’t easy, but it was inevitable—the nomination could not be won running to the establishment’s left.

Since the last Bush presidency, the establishment’s grip over the nomination process has steadily weakened. McCain’s campaign nearly went broke ahead of the 2008 primaries and he needed an improbable series of events to escape with the nomination. He still won fewer votes than Mike Huckabee, Mitt Romney and Ron Paul combined.

Romney struggled to put away the disorganized, underfunded campaigns of Rick Santorum and Newt Gingrich in 2012. He lost two of the first three nominating contests to them despite an overwhelming financial and organizational advantage, barely beat Santorum in the crucial Ohio primary (the next day’s New York Times headline was “Romney appears the Ohio winner; Santorum strong) and didn’t clinch the nomination until it was almost June.

But neither McCain nor Romney regularly polled in the single digits nationally less than 100 days before the Iowa caucuses. That is the situation with Jeb Bush, who is also behind in all of the early states, including his home state of Florida, where he was a two-term governor.

Bush had hoped to take the field by storm with a “shock and awe” fundraising blitz. Indeed, his super PAC raised more than $100 million. But there were still ten candidates on stage with him Wednesday night and four more in the undercard debate.

Now Bush’s fundraising has slowed as his first major donors have contributed as much as they can legally and new big donors are deterred by his lackluster poll numbers. Last night’s debate performance won’t convince them to open their wallets. The Bush campaign has also spent heavily to little obvious benefit.

Twice in a row, Bush has entered the debates with planned attacks on rivals that he had telegraphed beforehand. Twice in a row, he has been slapped down. Bush demanded that Donald Trump apologize to his wife. Trump didn’t. Bush suggested Rubio resign from the Senate. Not only did he demur, but people came away from the exchange speculating about when Bush would drop out of the presidential race.

Rubio’s forceful debate performance was more dangerous to Bush. Rubio can take Bush’s establishment supporters and his Florida geographical base away from him. Bush may have more governing experience, but what evidence is there that the Republican primary electorate cares about that? Rubio does everything else Bush was supposed to do (communicate an effective general-election message, reach out to Latinos, unite the party’s different factions) better while offering a potentially powerful generational contrast with Hillary Clinton.

Put simply: If Bush isn’t the most electable Republican, why go against the Clintons with another dynastic retread candidate?

While other Republicans could likely afford an off night—the ratings aren’t in at this writing, but you would have to assume the World Series cut into viewership—important people looking for Bush to show signs of life were almost certainly watching.

The danger for Rubio is that in order to win the nomination he must supplant Bush as the establishment candidate, but once he does that he becomes vulnerable to the anti-establishment anger within the party. (He also shares Bush’s vulnerability on immigration.) Right now, Rubio can retain the anti-establishment image he gained as a Tea Party-backed primary opponent of Charlie Crist in Florida by fighting Bush while simultaneously looking more plausible for next November than Trump or Carson.

Trump or Carson could make it difficult for Rubio to get off the ground in the early states. Or Ted Cruz, coming off his best debate showing, could be effective at challenging Rubio from the right.

There’s a slim chance the establishment could turn to Chris Christie, who had a good debate, or John Kasich. But Christie has fallen further than Bush and Kasich seems to be repeating the mistake of previous John Weaver-advised GOP presidential candidates in assuming the entire primary electorate consists of New Hampshire independents.

Jeb Bush may well hand the party establishment its first nomination loss since his father was beaten by Ronald Reagan in 1980.