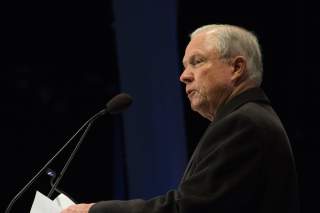 If last week’s testimony by James Comey before the Senate Intelligence Committee was Washington’s Super Bowl, then Tuesday’s hearing with Jeff Sessions was the Pro Bowl: relatively meaningless, not expected to count for anything, but endlessly hyped nonetheless. The media was atwitter for Sessions’s latest appearance, though it wasn’t clear what he was supposed to say that would merit the ballyhoo. He’d recused himself from the Russia investigation, hadn’t he? What bombshells did he have to drop?

According to senators, they would come over an allegation made by James Comey during closed-door testimony last week that Sessions had possibly met with omnipresent Russian ambassador Sergey Kislyak at the Mayflower Hotel. If true, this was the third time that Sessions was shown to have huddled with Kislyak, after the attorney general previously asserted that he hadn’t had any contact with the Russians during the campaign.

Pressed on this by senators, Sessions declared the supposed Mayflower meeting to be bunk. He allowed that he’d attended an event where Kislyak had also been present, but said he didn’t recall talking to him beyond a possible brief exchange of pleasantries. Thus was resolved the potboiler of whether the Russian ambassador, whose job it is to converse with sitting senators and campaign surrogates, might have conversed with a sitting senator and campaign surrogate. Sessions’s most important line about Kislyak was also his most banal: “I met a lot of people who wanted to argue their cases for their countries.” This happens all the time.

Yet Democrats methodically grilled Sessions on this point as though his memory might suddenly be jogged: “You know what, Senator Warner, I did make a pact with the Russian ambassador to surrender the nuclear codes to the Kremlin following Trump’s election. I’d forgotten about that.” Even if Sessions had met with Kislyak a dozen times, it still wouldn’t have mattered, because it wouldn’t have proven anything sinister. There’s no there there. As for the probe into the Trump campaign’s supposed collusion with Russia by special counsel Robert Mueller, Sessions’s hands were predictably empty: as was mentioned earlier, he had recused himself months ago.

So what was the point? For the president’s detractors, the hearing seemed less about following the evidence than conjuring up more imaginary bread crumbs on the trail from Trump Tower to Moscow. It also allowed them to try to humiliate an ally of the president’s. Hence the unbearable gushing over Sen. Kamala Harris’s contentious and lightly McCarthyite line of questioning (“Did you have any communication with any Russian businessmen or any Russian nationals?”), which got an agitated reaction from Sessions without actually accomplishing anything. The attorney general clawed back often during his testimony, especially during his opening statement, when he blasted insinuations that he’d colluded with the Russians as an “appalling and detestable lie.” “I did not recuse myself from defending my honor,” he said, and seemed to mean it.

He may have to get used to the innuendoes. His hearing today will have changed no one’s mind and provided nothing except another paroxysm for the cable news networks. Sessions is partially to blame for his own plight—he might have fully cleared himself from the blast radius if he’d recused himself earlier and been more forthcoming about his interactions with Kislyak—but he’s also a victim of circumstances beyond his control, namely Trump’s own behavior and the media’s frenzied search for FSB agents peering out of the wainscoting. And so on we go. What if, instead of hosting another Pro Bowl, the media decided to be patient and wait for the special counsel’s conclusions to come in?