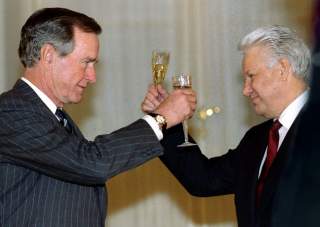 IT WAS the kind of parade Donald Trump dreams about. On June 8, 1991, hundreds of thousands of spectators flooded Washington’s National Mall to watch over eight thousand troops and a packed trail of tanks, jeeps, helicopters, fighter jets and missiles (as well as a capability few had seen before, a surveillance drone) on display to celebrate the U.S. military’s overwhelming victory against Saddam Hussein’s Iraq. According to the New York Times, it was the biggest military spectacle in Washington since Dwight Eisenhower marched victorious American GIs down Pennsylvania Avenue to celebrate the end of World War II. The happy crowds honored the troops, and they also cheered their triumphant commander in chief, George H. W. Bush.

At that time President Bush was riding high. His approval rating topped 90 percent, and the smashing military success seemed to end the nation’s long Vietnam hangover. Bush was known to be a cautious leader, memorably caricatured by comedian Dana Carvey with the phrase “wouldn’t be prudent,” but he had taken a huge risk by deploying half a million troops to force Iraq out of Kuwait. He had endured a bitter political debate over the war—one that most Democrats opposed—and came out better than even he expected. Basking in this accomplishment, Bush observed that “there is a new and wonderful feeling in America,” a pride that would end the bitter partisanship of the Cold War. And, he hoped, the Gulf War would prove a harbinger for a different kind of global politics—as he famously called it, a “new world order.”

The cornerstone of this new order would be a fundamentally different relationship between the United States and Soviet Union. Just a few years earlier, a crisis like Iraq’s invasion of Kuwait would have quickly escalated into a superpower showdown. But this time proved different. Instead of lining up on opposite sides to defend their proxies, the United States and Soviet Union stood together to punish Saddam and, for the first time, agreed in the UN Security Council to authorize American-led military action in response. To James Baker, Bush’s close friend and secretary of state, that was the moment the Cold War ended.

Yet in the midst of this triumph, Bush privately sensed trouble ahead. He worried that with the Soviet Union in history’s dustbin, many Americans would ask why foreign policy mattered anymore, doubting if the sacrifices required for U.S. global leadership were still worth it. Politically, Bush knew he was vulnerable. His advisers warned of the “Churchill parallel,” when another leader had brought victory in war only to get tossed out of office. Of course, such concerns proved prescient, as Bush spent his doomed 1992 reelection campaign whipsawed by fierce currents—represented then by Bill Clinton, Ross Perot and Patrick Buchanan—that would define American politics for the next quarter century.

Bush was proudly a “foreign-policy president,” which politically was part of his problem. Full of restless energy—he appeared always on the move and was known for playing speed golf—he seemed to prefer dealing with the world and less interested in problems at home. He relished the global stage and practicing “Rolodex diplomacy” with many foreign leaders on speed dial, but in domestic affairs could come off as aloof and out of touch, whether by seeming mystified by a grocery-store scanner or conspicuously looking at his watch during a 1992 presidential debate, as if he had somewhere more important to be.

Yet when reflecting on the dramatic global events that accompanied the end of the Cold War and the collapse of the Soviet empire—such as the fall of the Berlin Wall, German reunification, the Gulf War and the dissolution of the Soviet Union—one must conclude that we were lucky to have such a foreign-policy president at that time. (Pause for a moment and reflect on having Michael Dukakis in the White House during these years.) While in many ways any president who fails to get reelected after one term, like Jimmy Carter and Herbert Hoover, is by definition a failure, such a verdict doesn’t quite work for Bush. He presided over a remarkably successful era for America in the world, and today, Bush’s global leadership is heralded and his administration praised as a master class in how foreign policy should be made and implemented.

A QUARTER century after Bush left office, nostalgia for his presidency—and his brand of pragmatic and humble internationalism—is being shaped by historians, the most important of which is Jon Meacham’s monumental biography published two years ago. (Another worthwhile entry is the surprisingly moving and insightful appreciation written by a notable amateur historian, George W. Bush, in his 2014 book 41.) There have been numerous assessments of Bush’s foreign policy, including insider narratives of German reunification or the Middle East peace process, as well as doorstop memoirs, including one cowritten by Bush and his national security advisor, Brent Scowcroft; by former CIA director Robert Gates; and by James Baker (full disclosure: I assisted Baker with the research for his 1995 memoir). But by far the most comprehensive—and compelling—account of these dramatic years thus far is Jeffrey Engel’s When the World Seemed New.

Engel, a former professor at the George H. W. Bush School of Government at Texas A&M who now teaches at SMU, has made a career studying Bush. This is the fourth book he has written or edited on Bush’s foreign policy, and his work benefits from encyclopedic knowledge of the archives and hours spent talking with most of the key players, especially Bush himself. Engel’s mastery of his subject leaps off every page, and while clearly admiring, he is no court historian. On the contrary, he gives an unvarnished assessment of where Bush got it wrong. Yet after reading this lively book, the overall impression is one of great appreciation for a president and team of advisers that handled momentous events skillfully. Because so many things broke America’s way, as if everything were foreordained by destiny, in hindsight Bush does not get the credit he deserves.

Bush prized personal relationships—“Where would we be without friends?” he often asked—and the most important one of his presidency was with an unlikely partner, Mikhail Gorbachev. Initially, Bush and his core team (especially Scowcroft) were suspicious of the motives behind the Soviet leader’s glasnost and perestroika. They worried that instead of genuine accommodation, Gorbachev was relaxing tensions only to buy time, drive a wedge between the United States and Europe, and renew Soviet strength. They saw it as détente all over again—“once burned, twice shy,” was how Scowcroft later described their suspicions—and were frustrated that in 1989, the energetic Gorbachev seemed to be driving the agenda.

Ronald Reagan left office believing Gorbachev was for real, saying that all his talk about the Soviet Union as an evil empire was from “another time and another era.” Bush was less convinced. He had only met Gorbachev a few times—including, as Engel reminds us, during Gorbachev’s electrifying 1987 visit to Washington—and found him to be a showboat. Bush and his advisers were uneasy with Reagan’s warm embrace of the Soviet leader, and sought to pump the brakes on change. “We must take the offensive,” Bush told Canadian prime minister Brian Mulroney just weeks after entering the White House, adding, “We cannot just be seen as reacting to yet another Gorbachev move.”

The evolution of Bush’s relationship with Gorbachev in 1989 is an important story, and it dominates the first half of Engel’s book. One watches as Bush warms to the Soviet leader, growing to sympathize with his plight and admire his courage. Bush’s initial suspicions were quickly overtaken by events, as Gorbachev stood by and watched Soviet influence unravel in eastern Europe. Yet Bush remained cautious. He resisted the temptation to celebrate historic events like the fall of the Berlin Wall, worried that such triumphalism would backfire. He wanted Gorbachev to become a partner—not a defeated, embittered enemy full of grievance. Publicly and privately, Bush said he wanted to handle things “properly” and exercise restraint. Stability mattered above all else.

Much of this can be attributed to Bush’s leadership style. But Engel offers an important twist from half a world away that, up to now, has been underappreciated. He shows how the June 1989 massacre in Tiananmen Square had a major influence on how Bush reacted to events in Europe, fueling worries about what may happen when similar regimes confronted protesters. Bush thought he understood China—having led the diplomatic mission in Beijing in the 1970s, he had close relationships with many of its key leaders, especially Deng Xiaoping—and believed that China was on the right track. This is an example of when Bush’s reliance on personal relations did not work out so well.

Instead of rushing off to Europe to meet Gorbachev, Bush’s first trip abroad as president was to Asia, stopping in China to rekindle relationships. Yet the visit got mired in controversy around the Chinese government’s handling of a prominent prodemocracy activist—whom they blocked from attending a U.S. embassy reception, igniting a media firestorm. Bush got tagged with being weak on upholding liberal values (or what Bill Clinton later described as coddling the “butchers of Beijing”), which only grew worse with his lackluster response after the tanks rolled into Tiananmen, in which he labored to maintain ties with the Beijing leadership rather than sever them.