The Last Gamble of Iran’s 'Man for All Seasons' 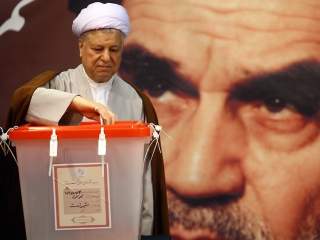 Fires are raging in the Middle East, from Syria and Turkey to Yemen and Iraq. Located at the heart of the region, Iran has been a true island of stability. But this stability could be threatened by the historic elections for the Assembly of Experts and parliament on February 26. While the battle over daily aspects of power between the reformists and the hard-liners in Iran has caught the attention of many Iran watchers, a more hidden, yet earth-shattering, process is shaping the trajectory of the domestic power struggle within the country.

The surprising victory of Iran’s moderate President Hassan Rouhani in the Islamic Republic’s presidential election in June 2013 had many on the edge of their seats. Few predicted his victory in a regime-controlled milieu, especially in the atmosphere of disappointment that followed the controversial election of 2009. But just when many thought most Iranians would call for a boycott, objecting to what seemed like the regime’s decision to determine the outcome of the election, a wave of support for former presidents Khatami and Rafsanjani changed course and directed toward Rouhani.

Bringing a new tone to nuclear talks and the growing domestic economic crisis, Iran’s “Diplomat-Sheikh” convinced Iranians to vote for him. But he could not have been able to get this unexpectedly remarkable victory without his strategic alliance with the “Man of Shadows”: Ali Akbar Hashemi Rafsanjani.

But winning the election is only the first step toward the accomplishment of his mission. In fact, what persuaded Rafsanjani to run for office, and then support his aide Hassan Rouhani in the presidential election, was not resolving the international and economic crises. Nor does it seem to have been a narcissistic impulse or an insatiable desire for power. Rather, Rafsanjani’s entry into the fray had a message and the goal of controlling a significant process—the process of succession in the Iranian regime.

The issue of Supreme Leader Ayatollah Khamenei’s succession has been at the epicenter of public discussion in recent years. Beyond who will be the next leader, what is important is that the institution of the rule of the jurist, under Khamenei’s leadership, has become even more powerful than it was under Ayatollah Khomeini’s rule. All in all, what lurks beneath Iranian domestic politics has been deeply intertwined with this process.

This explains the gist of Mahmoud Ahmadinejad’s speech to supporters in the last month of his presidency, in April 2013: “a little patience will change the condition.” Ahmadinejad was referring to a complete substitution of the first generation of revolutionary elites. While almost all of the highest-ranking, mostly clerical, elites of the Islamic Republic are in their seventies and eighties, Ahmadinejad and his team were in their forties and fifties. They had money and networks, as well as opportunities to mobilize people, particularly the marginalized. Had they come to power after the recent election, considering Ayatollah Khamenei’s age, they would have had a unique opportunity to become kingmakers. Rafsanjani came onto the presidential scene to prevent them from manipulating this process.

In the wake of the crucial elections for the Assembly of Experts and parliament, the situation has changed. President Rouhani and Foreign Minister Mohammad Javad Zarif have been able to dispel the fog of another war in the Middle East and sign a historical agreement with the P5+1—an agreement that was mostly seen as favorable to Tehran, particularly by Israel, Saudi Arabia, the Republican Party in the United States and the Arab sheikhdoms of the Persian Gulf. The nuclear pact has also transformed the balance of power in Iran’s favor and made the West recognize the revisionist country as a regional power.

Within this situation, Rafsanjani’s aim is to control the critical succession process. To achieve this strategy, he needs some factor to tilt the balance of power in his favor. One of these critical factors was a letter that was unexpectedly neglected on the eve of the presidential election.

“On the same day I heard Imam’s [Ayatollah Khomeini] confirmation of your leadership from his own mouth, and I have consistently repeated that theory whenever necessary. I also heard him confirm the qualification of Brother Hashemi Rafsanjani, because Imam mentioned his name after your name. Fortunately and deservedly, you received the votes of the Experts; therefore, I did not see it necessary to mention any of this so far,” Mostafavi wrote.

Right after Khomeini’s death in 1989, Khamenei was elected as the new supreme leader. But he could not become the most powerful man of Iran without Rafsanjani’s word that Khomeini wished Khamenei to be the next leader of the Islamic Republic. His speech played a crucial role in persuading the Council of Experts to back Khamenei’s leadership.

The significance of this letter, which deserves to be called historic, was not Khomeini’s daughter’s support of Rafsanjani, nor was it a critique of Khamenei. For the first time, a public letter pointed to Khomeini’s attitude toward Rafsanjani as a potential candidate to succeed him as the supreme leader; a message that could effectively make a powerful alternative for Ayatollah Khamenei. This means that in the future, the currently hidden process of succession beneath the fluid dynamics of the Iranian politics will be revealed.

Enjoying deep, broad sociopolitical support within Iranian society, Rafsanjani has shown that the source of power is not military and brute force; rather, it is derived from the people. Putting emphasis on this issue in his various speeches, Rafsanjani has been able to resuscitate his image and gain symbolic political capital. Amid the presidential election, he was clever enough to invest this acquired capital in his closest aide, President Hassan Rouhani.

At this stage, Rafsanjani has no capability to challenge the hard-liner directly, though the recent election has shown that he is still a genius in Iranian politics. Thus, his strategy would be a gradual challenge: a “War of Position” in Gramscian terms. The coming election of February 26 is a key step in his War of Position.

From now on, the story of the Islamic Republic will be seen as a clash between brute force and the people over the process of succession.

The destiny of the Islamic Republic has been bound up with that of a “man for all seasons”: Ali Akbar Hashemi Rafsanjani. His last season has just begun.

Arash Reisinezhad is a research fellow at the Middle East Studies Center and an adjunct professor at the School of International and Public Affairs at Florida International University.