The Left's PC Hypocrisy on Islam 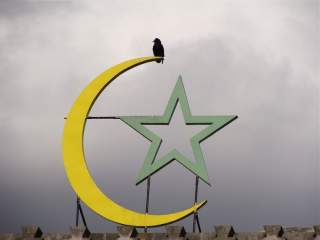 Partisans of the Left compulsively claim President George W. Bush was an imbecile who couldn’t be trusted on anything. If they’re right, all of us must reflexively and wholly refute every statement he ever made. It would seem very reasonable, then, to first dispense with a sweeping pronouncement on one of the most pressing and thorny issues of modern times, an issue that obviously no Texan troglodyte could hope to grasp: “The face of terror is not the true faith of Islam. That’s not what Islam is all about. Islam is peace.” Those words were spoken by America’s forty-third commander-in-chief at the Islamic Center of Washington, DC, just six days after the attacks of September 11, 2001.

Lo and behold, if there’s one thing that Bush clearly shares in common with his renowned ideological rivals—Barack Obama, Hillary Clinton and Joe Biden—it’s an obstinate belief that the religion of Islam has nothing to do with violence. Obama has defended “the true peaceful nature of Islam.” Clinton has tweeted, “Muslims are peaceful and tolerant people and have nothing whatsoever to do with terrorism.” And Biden, after listening to activist, author and ex-Muslim Ayaan Hirsi Ali discuss the relationship between ISIS and Islam, reportedly retorted, “Let me tell you one or two things about Islam.”

Actually, there are a few things that Bush, Obama, Clinton and Biden share in common. None of them are theologians, none of them are scholars of Middle Eastern history and none of them—not even Obama, as far as I’m aware—can read classical Arabic and, thus, understand the Koran, the hadith (the traditions and habits of Muhammad) or the sunna (the teachings and sayings of Muhammad) in their original form. (Whether Bush, Biden or Clinton has bothered to read a single translated page of these texts remains to be seen. Obama, who from ages six to ten, attended a public school in Indonesia influenced by the West, appears to be in much the same boat.) Yes, our political leaders are perfectly unified in their immense ignorance of the worldview to which 1.6 billion people—around a quarter of the global population—subscribe.

But let’s leave aside for a moment the contentious and oft-debated question of whether Islam is a religion of peace. Why the absence of “’splaining” accusations? After all, the numerous branches of the PC Police typically leap to castigate those who opine on topics beyond their “knowledge.” (“Knowledge” and, accordingly, “credibility” are allegedly derived not from academic training, but instead primarily from lived experience.) To “’splain” is “to explain or comment on something in a condescending, overconfident, and often inaccurate or oversimplified manner, from the perspective of the group one identifies with.”

So with today’s incessant talk of Islam, where are the social-justice warriors who summarily slam nonblack academics who, for example, seek to understand and alleviate the causes of African American poverty? Where are the feminists who excoriate male journalists who, for instance, endeavor to comprehend the difficulties women endure in the workplace? And why is the grievance Gestapo not up in arms, furiously scolding eminent non-Muslims for rendering, from the mightiest of bully pulpits, definitive judgments on issues about which they know virtually nothing? Are Bush, Obama, Biden and Clinton—if I may coin a word—“Christiansplaining”?

Perhaps. It doesn’t truly matter though. What does matter is, first, what is revealed by the dithering of liberals and progressives otherwise obsessed with enforcing mental segregation, who are usually so eager to condemn those who have strayed beyond their designated racial, religious and gender pens. To be sure, more than any other issue, Islam—specifically, the absurdly rudimentary way in which it’s characterized by prominent nonbelievers with no substantive familiarity with the faith—proves that the Left’s outrage is selective. It candidly demonstrates that “’splaining” indictments—along with their ugly siblings, safe spaces and trigger warnings—are systematically used, contrary to the Left’s avowals, to curtail rather than enhance free speech. The bottom line: Who is speaking is of little import as long as what a person utters coincides with one of the Left’s narratives, ambitions or ideals.

A second reason the Left’s willingness to overlook Christiansplaining matters? Its opinions are hollow, which means the allegations of racism and xenophobia it hurls are (usually) similarly empty. When elected officials, who are profoundly distrusted, as polling consistently shows, mimic what some imams and Islamic scholars say—that Islam is a religion of peace—suspicion naturally flows due to the transitive property of equality. Worsening the situation, the reassurances are almost always heard, due to status and the nature of the media landscape, pouring forth from the mouths of elected officials as opposed to the imams and Islamic scholars.

Moreover, when some Muslims and ex-Muslims in addition to other Islamic scholars stress that Islam does in fact have internal theological problems, then anxiety quite rightly increases rather than decreases. On June 12, Dr. Zuhdi Jasser, Founder and President of the American Islamic Forum for Democracy, demanded that his coreligionists develop “real reforms” and “get our Sharia Islamic law out of the 13th century in which it’s stuck.” In short, Americans have been pounded by contradictory voices.

Americans have also caught pundits and “experts” on television and radio lecturing about the urgent need for Muslim American communities to spearhead efforts to counter extremism and homegrown radicalization. But most Americans don’t live in or near a Muslim community, so they don’t see what—if anything—is transpiring to unearth and uproot the few bad weeds. In the meantime, they do witness one terrorist attack after another plotted and carried out on domestic soil: Chattanooga, Boston, San Bernardino, Orlando. It’s reasonable then to conclude that progress is not being made within those environs closest to past perpetrators.

And here are the most taboo yet prescient questions: If our elected officials—as well as the preponderance of those who comment daily on religious extremism—are, for all intents and purposes, totally unversed in Islamic theology, who are they to distinguish between what is “radical Islam” and what is “non-radical Islam”? If a majority of Muslims are not violent, does that mean the religion of Islam itself is not violent? Or could it possibly instead mean that the majority of Muslims aren’t following the religion of Islam as it is written or as it was intended by Muhammad to be practiced?

As a Jew, I would be insulted if a non-Jew were to boldly declare that “Judaism is a religion of peace.” Regardless of whether Judaism is inherently peaceful or not, I wouldn’t want my faith reduced in such an elementary way, especially by someone outside the faith. And arguably the mere notion of “religion”—as it’s used by our elected officials—is ethnocentric. It connotes, certainly within the American context, a personal and private approach to spirituality, Protestant and Madisonian, reflecting salvation and faith rather than commandments and community, which are more the focus of Judaism and Islam.

The point is that non-Muslims in high places describing Islam as a religion of “peace” has long outlived its usefulness. It’s so obvious—and frustrating—now that the rhetoric was employed with an eye toward public calm rather than the actual content of Islam. This is not to say, however, there’s a need to conversely decree Islam a religion of “violence”—or anything else for that matter. It’s not even to say we shouldn’t take seriously the avowals of those who commit terror in the name of Islam. It’s only to say that this is one of those unique circumstances in which there really has been “’splaining” and, ultimately, only authentic insiders (i.e., Muslims and scholars of Islam) are equipped to address the theological tenets of Islam being “exploited,” “distorted” and “manipulated.”

Moving forward, to better protect America, the explaining away of Islamic extremism ought to end immediately. Asserting that “gun violence,” above all, has been the cause of homicidal assaults like the one at the Pulse nightclub is to discount context, culture and ideology. It’s tantamount to maintaining that the only reason the genocides of Armenia, Germany, Cambodia, Rwanda, Bosnia and Darfur—or any other murderous undertaking—occurred is because of the presence of lethal instruments. This programmatic myopia, which shoves aside reality for the sake of shielding a dangerously utopian view of human relations, is only sentencing to death other innocents at home and abroad.

Finally, the browbeating of those who don’t impeccably conform to multicultural norms must abate. It’s having a perilous chilling effect. After each tragedy, we learn someone hesitated to report suspicious activity out of fear of being branded a bigot. In the wake of Orlando, law-enforcement officers across the big networks stressed, “See something, say something.” That’s a cute slogan, but “see something, say something” is inextricably at odds with the pervasive doctrine of “tolerance,” which in effect means “tolerance at all costs.” “See something, say something” politely requests that we put self-preservation instincts before prejudices. “Tolerance” sternly demands that we bury self-preservation instincts to avoid offending others.

As things stand, the average citizen, after weighing the outcomes of action and inaction, will too often continue to conclude that pointing out something odd—and later being proven wrong—simply isn’t worth the hassle. That needs to change. Americans have always been far more sensible and intuitive than assumed by the nation’s elites. It’s time to trust gut instincts, irrespective of what pundits, politicians and professors are claiming—or not claiming.