The Legacy of Bernard Lewis 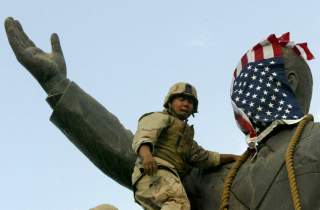 An essential takeaway from Lewis’s writings from 2001 through 2003 is the extent to which the case for the invasion of Iraq was built on arguments such as strength, local support, and the necessity of democracy promotion abroad — in other words, arguments separate from Saddam’s supposed possession of weapons of mass destruction. Lewis rarely mentioned WMDs in his writings and interviews. Another takeaway is that every argument Lewis made for Iraq also was made for Iran. In fact, Lewis recounted in his memoir that his primary concern during his consultations with the Bush administration was Iran, rather than ousting Saddam Hussein from Iraq. None of this should be elided in a recollection of how the United States stumbled into war before — especially since, as National Interest editor Jacob Heilbrunn recently noted in reference to the ascent of National Security Advisor John Bolton, “the spirit of George W. Bush has once more begun to inhabit the White House.”

But — and this is a crucial point — Lewis never went all the way. He never unequivocally called for an invasion, at least not in public. While others wrote off a war and what would follow as a “cakewalk,” Lewis was never so cavalier or crass. He knew his history, after all. Previous experiments with democracy in the Middle East had died unpleasant deaths. “The record, with the exception of Turkey, is one of almost unrelieved failure,” he wrote. “Western-style parties and parliaments almost invariably ended in corrupt tyrannies, maintained by repression and indoctrination.”

Lewis’s legacy is that it’s yet to be written. We have his books, his essay, his interviews, and his op-eds, but we have precious little even now to compare what he said in public with what he might have advised in private. Perhaps the truth will go to the grave with Lewis and those he advised. It’s a daunting prospect, for sure, but it’s also an opportunity. Just as Lewis stood at the opening of the Imperial Ottoman Archives in Istanbul and saw an Ali Baba’s cave of history yet to be discovered, modern historians might look now at a life just ended and see a kind of beginning, a start of truths yet to be revealed.

John Richard Cookson is a nonresident fellow at the Chicago Council on Global Affairs.

Image: A U.S. Marine covers the face of a statue of Iraqi President Saddam Hussein with a U.S. flag in Baghdad, Iraq April 9, 2003. REUTERS/Goran Tomasevic/File Photo