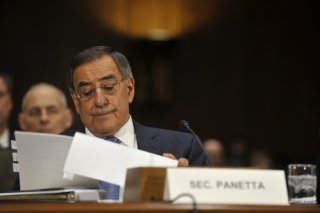 Self-awareness seems to be an obstacle to advancement in Washington. Fortunately, it is an attribute most people climbing the greasy pole in this city conspicuously lack.

Consider the reaction to Leon Panetta’s new book Worthy Fights. You would think the media would be ecstatic to have new inside information from the relatively leak-proof Obama administration. Even if Panetta presents the facts in a totally self-serving way—what book by a Washington insider doesn’t?—it still on balance enlarges our store of knowledge about this White House and its decision-making process.

Instead we get pieces questioning Panetta’s loyalty, with all the president’s men bitching (mostly anonymously) to Politico about the former Pentagon chief and stunned Washington Post columnist Dana Milbank clutching his pearls. Panetta has become, almost Olbermann-style, something like the worst person in Washington.

“The lack of message discipline is puzzling, because Obama rewards and promotes loyalists,” Milbank wrote with wide-eyed wonder. “But he’s a cerebral leader, and he may lack the personal attachments that make aides want to charge the hill for him.”

So the press will charge that hill for the cerebral leader instead.

An odd media reaction very much at variance to, say, David Stockman dishing on the Reagan administration. Now, it should be noted that this response has been far from universal. The Washington Post’s Dan Balz praised the book as a public service. National Journal’s Ron Fournier concurred.

But even these columns, which acknowledge that much of Panetta’s criticism is valid, dwell on the question of whether or not the book is an act of disloyalty against Barack Obama. Is that really the biggest question Panetta raises?

At the very least, it shows a media that’s oblivious to how much of the country perceives it: as at best incurious about the administration’s flaws and at worst protective of them.

As for Panetta, unlike Hillary Clinton or Robert Gates, it’s not clear how often he was really a voice for the disagreements he is now airing while he was still inside the administration. He complains that the president didn’t arm the Syrian rebels, but how much did Panetta actually push for him to do so?

The bigger problem with Panetta’s critique is this: he assumes that the way to redeem Obama’s disengaged presidency is to arm more rebels, drop more bombs and keep wars going. This is consistent with the Republicans who chastise Obama for leading from behind.

Not only is this advice substantively bad—yes, let’s have the Operation Fast and Furious administration trying to identify and arm moderate rebels in the Middle East—it misses a key point. In many cases, Obama has already given us the worst of all possible worlds: a president pursuing a half-heartedly interventionist foreign policy that he doesn’t seem entirely sold on himself.

The track record of that approach in Afghanistan, Libya, Egypt and even Syria doesn’t look very good. Encouraging Obama to double down on it seems like folly.

In retrospect, it is easy to say that keeping a residual force in Iraq would have prevented ISIS’ rise. Panetta, who was actually involved in the negotiations to try to keep U.S. troops there, joins the chorus making that claim.

But the withdrawal wasn’t purely a product of Obama’s reluctance to fight for a new status of forces agreement. It was the result of real political conditions in both the United States and Iraq that were not entirely of Obama’s creation.

The United States would have once again been working with unwilling coalition partners on a mission with dwindling support at home. The recent trajectory of the Afghan war suggests this is not exactly a prescription for success.

It’s telling that the political class seems more interested in relitigating the 2011 withdrawal than the 2003 invasion.

The conversation Panetta has started tells us a little about Obama and reminds us of a lot about Washington.