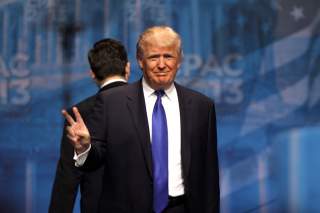 One of the popular conclusions among those trying to deconstruct President-elect Donald Trump’s foreign policy vision, is that such a vision may not exist, and that the businessman-turned-president is a not a man of ideas, and certainly not an idealist or an ideologue, but a pragmatic technocrat who approaches policy issues on a case-by-case basis very much like a business transaction.

A man who loves to fix things in the same way he helped bring back to life the business he inherited from his father, Trump considers himself a great dealmaker and he thinks that all the problems facing the United States, including in the international arenas—immigration, trade, national security—are consequences of bad deals made by incompetent figures.

Moreover, insofar as he seems to be raising broad political and strategic issues, he does so in the form of a cost-effective analysis. Hence presidential candidate Trump questioned the need to continue participating in NATO or maintain U.S. security commitments in East Asia, arguing that Americans are not getting bang when it comes to protecting its allies. It is just becoming too expensive when we need the money to spend on other things; although we may consider maintaining these military alliances if the South Koreans and the Germans pay us what we deserve for carrying out our services.

Some would argue that contrary to the caricaturizing by his detractors as an impulsive foreign policy ignoramus, Trump’s plans to impose punishing tariffs on China, or for that matter, his call for reassessing U.S. membership in NATO, should be compared to opening bids in an auction or a bridge game. No, President Trump isn’t a raving isolationist who wants to pull U.S. troops from the Atlantic or the Pacific or a China basher looking forward to launching a costly trade war with Beijing. Like a shrewd businessman he wants to demonstrate that he is entering into the diplomatic game with a strong hand, exerting pressure on the Chinese to make a deal under which Washington would drop its threat of imposing sanctions in exchange for China agreeing to refrain from manipulating its exchange rate. And facing the prospects of the United States ending its security commitments to them, Germany and Korea will agree to spending more on their defense.

More recently, following the phone conversation between Trump and Taiwan’s President Tsai Ing-Wen, some critics argued that it violated the spirit of the agreements made with Beijing in 1979 with respect to the so-called One-China Policy and amounted to a diplomatic blunder.

But then Trump during in an interview with Fox News seemed to suggest that it was a calculated move on his part, noting that he wasn’t “bound by a One-China Policy unless we make a deal with China having to do with other things, including trade.”

In response, some analysts have proposed that President-elect Trump was inaugurating a new era of “transactional diplomacy” as opposed to the kind of “transformational diplomacy” championed by the administration of President George W. Bush.

Forget the Freedom Agenda and nation building. Replace Making the World Safe for Democracy idealism with Making America Great Again realism. In his dealings with other governments, the author of the Art of the Deal would not be promoting American ideals around the world but ensuring that the United States would achieve concrete results that could be measured in dollars and cents.

In fact, assuming that this is, indeed, what Trumpism would mean in the area of foreign policy, it’s important to note that it won’t mark a dramatic shift in American diplomacy.

Hence as part of FDR’s lend-lease agreement with Britain, the United States ended-up seizing what was left of Britain’s gold reserves and overseas investments to help pay for increased defense production.

And during the Cold War and the era of détente, President Richard Nixon and Secretary of State Henry Kissinger branded the notion of transactional diplomacy as the so-called “linkage” policy under which they pressured Moscow and Beijing to restrain revolutionary movements in the third world (and communist parties in Europe, in the case of the Soviet Union) in exchange for American concessions in the economic and nuclear areas: Progress in area A was dependent on progress in area B and vice versa.

It also makes some sense that those who are masters in the art of the deal would be able to negotiate better trade agreements and even diplomatic accords than your average politician or government bureaucrat.

From that perspective, Trumpists note that President-elect Trump and his secretary of state nominee Rex Tillerson are two tough and cunning businessmen who have demonstrated a lot of success in winning in their negotiations with their counterparts in the corporate world. That proves that they could be more effective in making deals with China or Iran than President Barack Obama, Secretary of State John Kerry, and other officials that Trump has depicted in numerous occasions as “incompetent” and even “stupid.”

But the notion that to make foreign policy work, all you need are astute and tough businessmen who would make it more cost-effective is misleading, especially if you consider the following: No one would be willing to die fighting to protect the interests of ExxonMobil or to improve the Trump brand.

Unlike international business, foreign policy and national security involve issues of war and peace, and by extension, of life and death. And when we elect a president, we put our trust in the next commander in chief as opposed to the new CEO of the United States; in the leader of our national tribe who would protect us and our families from a foreign threat, and not in the trader in chief who would make great international deals for us.

Indeed, the national interest isn’t akin to corporate interest. It embodies the core values and sense of identity of a national community. In a way, we know that it’s a core national interest when the citizens of a country are willing to be sent to war and pay enormous human and economic costs involved in fighting a war. In the context of national security, “cost-effective” makes sense not exclusively in terms of dollars and cents, but in terms of deterring an aggressor or if worse comes to worst, in winning a war. No one is willing to die in order to force China to raise the value of its currency.

A president does rely on the advice of non-elected officials, of economists, engineers and scientists as well as business executives who help him or her carry out foreign and domestic policies. These technocrats or policy wonks do make decisions based on cold cost-effective calculations, like whether we should impose a 10 percent or 15 percent tariff on Vietnamese agricultural imports.

But it’s the job of the elected president to make the critical foreign policy decisions that could lead to wars based on his or her ability not only to feel the mood of the nation, but also on a personal sense of what America is all about, a perspective which is usually grounded in reading history and in a set of values. The technocrats help ensure that the decision he or she makes will be successfully executed.

President-elect Trump, who seems to frame every policy problem in cost-effective terms and assumes that it could be resolved as a business transaction needs, therefore, to recognize that his job goes beyond making deals.

“I would love to be the one who made peace with Israel and the Palestinians, that would be such a great achievement,” Trump told the New York Times editorial board recently, suggesting that he could appoint his son-in-law to broker a deal after taking over.

But the idea that Israelis and Palestinians have failed to make peace due to the lack of negotiating skills on the part of the American peace brokers would be dismissed by anyone who took an introductory course on Middle East politics, and understands that both sides are driven by deep-rooted historical, religious and psychological forces, and that each side would not be willing to compromise on what it sees as its national interest and could pose a threat to its existence and core national values.

Which is the main reason why these and other conflicts, like in Kashmir, Cyprus or Nagorno-Karabakh will not be resolved anytime soon even if President Trump assigns the best and the brightest Harvard MBAs to negotiate them or tries to do that himself.

In that context, proposing that the United States demand that China readjust its currency policy in exchange for continuing American commitment to the One-China policy or that the problem with the nuclear accord with Iran has to do with the “bad deal” that was made, overlooks the political realities in East Asia and the Middle East that are grounded in deep-rooted historical factors that cannot be resolved in one set of negotiations.

What is seen initially as progress in area A could lead to losses in area B, as each move has the power to create a chain reaction that requires the president to master the art of diplomacy. In fact, that was one of the reason that Kissinger’s linkage policies didn’t always achieve their goal, especially since the Soviets and the Chinese failed on many occasions to control their allies in the third world.