The Line That America Shouldn't Cross in the South China Sea 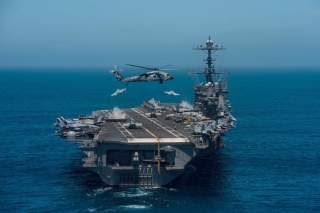 Crossing the 12-nm Line: From Sinking Costs to Tying Hands

Several days later, a face-off between the two militaries occurred. The Chinese People’s Liberation Army/Navy (PLAN) issued warnings when a U.S. P-8 Poseidon maritime reconnaissance aircraft flew over China-controlled artificial islands. It is not clear whether this will become a sustained pattern. It is particularly worth noting whether the U.S. naval vessels will cross the 12nm line. A warship cruising close to the man-made islands is a much stronger signal and a more real threat, at least in the eyes of the public, compared to a surveillance or anti-submarine plane flying over at 15,000 feet. Whatever the outcome, Secretary Carter's proposal demonstrates that the U.S. military is considering a critical shift in its SCS bargaining strategy, shifting from sinking costs to tying hands.

American political scientist James D. Fearon examined sinking costs and tying hands, two types of signaling to increase credibility of threat. The first strategy, sinking costs, involves taking actions like troop mobilizations that are financially costly ex ante. The United States has relied on this strategy in recent years, incurring greater military and diplomatic investment to repulse Beijing. The second strategy, tying hands, creates domestic audience costs that the country will suffer ex post if it does not follow through on a commitment. If Washington publically pledges to send naval vessels across the 12-nm line, failing to carry out such action would create domestic political costs. Fearon argues that tying hands generally leaves decision makers better off. At the same time, this behavior heightens the risk of war.

With a new U.S. policy in the SCS based on tying hands and the potential for American surface vessels to routinely cross the 12-nm line, a critical question emerges: how will China respond?

To predict the likelihood of Sino-American conflict, several factors should be considered—domestic politics, diplomacy and strategy, as well as military assessment. It is difficult to determine how exactly these factors would interact. In general, Fearon appears correct in judging that tying hands increases the risk of war.

Domestic Politics: Rally 'Round the Flag?

There are many issues one can address when considering Chinese domestic politics. One factor is more widely discussed than others: nationalism. The impact of nationalism on Beijing’s security policies, as well as the interactions between the party-state and the public are frequently condensed into an oversimplified linear argument. This argument dictates that the party-state's manipulation makes nationalism dominant in public emotion leading to aggressive foreign policy. The reality is more complex.

Australian scholars conducted a survey in 2014 on Chinese public opinion on the East China and South China Seas. They found that "the Chinese public appear to be less war-hungry on these disputes than commonly assumed. Only two policies failed to receive majority approval, one was the official shelve dispute policy, the other was send in the troops." Significantly fewer Chinese respondents support using military force, while the majority supported compromise and UN arbitration in territorial and maritime disputes. From the perspective of crisis management, this is all good news. U.S. military planners may be pleased to see that public opinion hinders Beijing's potential assertiveness. However, this is not the whole story.

To better put this survey in the context of the party-state’s relationship with public opinion, we need to consider two other issues. First, this study was conducted during a period of time when China was the primary challenger of the status quo in SCS. There were different ways of conceptualizing and contextualizing what the status quo was. Nevertheless, there was little doubt that China's rising assertiveness challenged the rules of the game or other parties' understandings of the rules. One crucial difference today, however, is that the status quo would be further challenged by the United States if its military stepped into the 12-nm line. It is thus not a stretch to expect that the respondents would be more sympathetic to assertive Chinese options if the study were conducted again.

Second, one of the other crucial findings of the study was that television remains the most influential medium in China. As the authors reasonably put, "given that TV continues to be one of the most tightly-controlled mass media in China, this suggests the party-state retains significant means to shape trends in public opinion on foreign affairs issues, even in the Internet era." A rally 'round the flag effect is not impossible even if the public is ex ante war-averse. This would be particularly true if the message the party-state conveys illustrates violations of China's sovereignty and territorial integrity. If we look at nationalism and the relationship between the party-state and the public, the likelihood of conflicts seems to be high as long as the party-state stands firm facing the newly provocative American military stance in the SCS.

China is playing multiple "Chicken Games." In a two-player, single-stage Chicken Game, such as the fiscal cliff at the U.S. Capitol, an equilibrium is realized when one player backs down. Chicken Games have two equilibriums, by which one of the two players must "lose" to avoid a head-on confrontation. Such a head-on clash leads to many bitter outcomes for both sides. Therefore, successfully signaling resolve becomes critical in gaining the upper hand and achieving the advantageous equilibrium in such a game.

What China faces is a more complex situation. Backing down in confrontations with one opponent can worsen its position in bargaining with other countries. Moreover, China's opponents more or less stand in the same line. This makes Beijing even less flexible.

However, if the United States insists on publicly denying and routinely penetrating the 12-nm lines, China simply cannot bear the costs of inaction.

When it comes to strategic logic, similarly, China will not sit back. Beijing learned a lesson in readiness and resolve after an incident involving the United States. Shortly after launching the East China Sea Air Defense Identification Zone (ADIZ), an American B-52 bomber flew into the zone and China did nothing. The U.S. plane was not heading toward China. Accordingly, it did not necessarily impose a legitimate threat to China. However, from Beijing's perspective, failing to intercept the bomber was a humiliating military and political failure.

The PLAN now has well-established routines of patrolling, scouting and escorting in the SCS. Since the EP-3 collision in 2001, the United States and China have been involved in numerous incidents in the region. Military encounters between the two are multidimensional in the SCS, occurring on fronts like airspace, surface, subsurface and cyberspace. Confrontations sometimes involve paramilitary assets such as armed fishing boats.

Ideally, the encounters should make both Washington and Beijing more experienced in how to interact with one another in a rational and predictable way. Unfortunately, a robust and mutually respected code of conduct has not been established. The actions such as going public on patrolling-warning interactions or potentially sending vessels across the 12-nm line will do no good amid already high mistrust between the two countries.

The policy makers and military planners in Beijing and Washington must consider the operational aspect of potential conflicts in the SCS. Due to the fog of war and its indeterminate nature, one can never be certain of the exact prospect of a militarized conflict. But we can use some baseline mathematical models to explore possible conflict scenarios. As aforementioned, the face-offs are happening at all military levels. But if the United States routinely penetrates the 12-nm line by sending surface vessels, the most likely scenario will be a sharp and short combat between relatively small surface combatants.

The conflict will be limited, as it is safe to assume that the overall strategic balance between the two countries ultimately forestalls an all-out war. It will be a surface battle mainly involving relatively low-value naval assets, because the involvement of airpower will be limited. Neither the United States, nor China are geographically positioned well to provide long-range, land-based fighter escorts. The United States could choose to station a Carrier Strike Group in the area, but regularly deploying a big deck in the SCS entails much greater expenses and risks, due to China's rising anti-intervention capabilities. Whether an anti-access/area denial (A2/AD) doctrine exists in China is an open question. But China clearly possesses capabilities, including a strengthening submarine fleet, airpower and mid-to-long-range missiles, to threaten American airpower projection.

Surface combats are not within America’s typical comfort zone. The U.S. Navy is developing new attack capabilities, such as rail guns, laser weapons and the new long-range anti-ship missiles. There are advocates for reinvigorating American naval surface warfare doctrine and capabilities. In the near term, however, the United States will probably not be on the winning side in a surface combat between small vessels.