The Long Arm of Iranian Terror 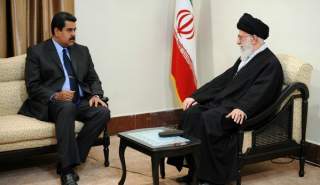 In recent weeks, an Iranian diplomat based in Uruguay hurriedly left the country after suspicions that he was involved in nefarious activities, purportedly involving a plan to bomb the Embassy of Israel in Montevideo, the nation’s capital. Reports differ as to whether he was formally expelled or fled just in time.

But questions are being asked: Is Iran testing the resolve of America and its allies in the midst of its nuclear negotiations with the P5+1?

The episode comes on the heels of the suspicious death of Alberto Nisman, the Argentine prosecutor charged with investigating the 1994 bombing of the AMIA, a Jewish community center in Buenos Aires, which killed 85 people. Five Interpol red notices – similar to arrest warrants – remain in effect for five Iranian officials implicated in the attack, including Mohsen Rabbani, cultural attaché at Iran’s Embassy in Argentina at the time. Nisman’s investigation found that Iran uses its embassies to gather intelligence and as bases from which to develop sleeper cells as it “exports its revolution.”

In Montevideo, there were two related incidents: On January 8, an explosive device was found adjacent to the new Embassy of Israel. And, some six weeks earlier, a suspicious suitcase was found near the former Israeli embassy there. The Uruguayan Foreign Ministry reportedly summoned Tehran’s ambassador, asking him why an Iranian diplomat, reported to be Ahmed Sabatgold, was seen parked in the vicinity of the suspicious suitcase.

Uruguayan officials said the coincidence of the presence of the Iranian official just a few dozen meters from the suitcase was unacceptable and warned that Uruguay would adopt “more severe measures should similar circumstances arise in the future.”

Haaretz reported that even though the meeting between the ambassador and Uruguayan Foreign Minister Luis Almagro was arranged at the last moment, “it seemed as if the Iranian ambassador knew quite well why he had been summoned, and had prepared an excuse in advance.” The alibi: the Iranian diplomat had a doctor’s appointment nearby. The Iranian ambassador said that the diplomat had left the country the day before, since “coincidentally he had completed his duties in Uruguay.”

Sabatgold reportedly was a well-known Holocaust denier and often spoke out against Jews, according to Uruguayan media reports. They say Sabatgold had been instructing a group of Muslim converts who operated within the framework of the radical Unidad Popular party.

In the January 8 incident, the explosive device was reportedly fitted with a fuse, detonator and other and was detected some 70 meters – about 230 feet - from the building.

Brigade Lieutenant Colonel Alfredo Larramendi, told reporters “it might have been put there to see the response time” of responders, or to “size up the quality of the security of Israel’s embassy.”

Last week, an Uruguayan newspaper reported that a local prosecutor provided Nisman with information in 2014 that the Iranian Embassy bought a house in Mohsen Rabbani’s name a few months before the AMIA bombing, on which the embassy was paying municipal taxes. Rabbani abandoned the property a few months after the attack.

Clearly, Nisman’s investigation was far from over. It continued to shed light on Iran’s long reach into Latin America. Recent plots in Montevideo indicate that Iran’s activities in the hemisphere appear to continue unabated to this day. It's a point that should not be lost on P5+1 negotiators.

Rabbani was regarded as the Iranian handler of a suspect in another plot – mercifully foiled – to blow up the fuel lines underneath New York’s JFK International Airport, for which the would-be perpetrators are serving life-sentences. Loretta Lynch, President Obama’s nominee to become attorney general, worked with Nisman connecting the dots between the AMIA bombing and the JFK plot.

Did President Rouhani criticize the incidents in Montevideo as unhelpful as Iran seeks to join the community of nations? Iran’s embassy in Montevideo called the report about the incident false and said it was aimed at “creating Iranophobia and tarnishing the Islamic Republic’s international image.” Iran’s state-funded PressTV implied it was a ploy by Israel itself. “Tehran has said in the past that Tel Aviv has ordered attacks against its own embassies in India and Georgia in order to damage Iran’s image in the host countries,” the article said.

Is Iranian terrorism high enough on the radar of U.S. policymakers and law enforcement?

In June 2013, the State Department’s annual report on terrorism maintained that “there were no known operational cells of either Al Qaeda or Hezbollah in the hemisphere,” but at the same time noted Iran’s increased presence in South America and said that there was a “marked resurgence” of Iran's state sponsorship of terrorism, through its Islamic Revolutionary Guard Corps-Qods Force, its Ministry of Intelligence and Security, and Tehran's ally Hezbollah."

Last week, Congress held a hearing on State Sponsor of Terror: The Global Threat of Iran. It presented an avalanche of evidence about Iran's terrorist activities today not only in Latin America but in Afghanistan, Iraq, Syria, Africa and yes, in the United States. It also reminded us about Iran's activities in cyberspace, including costly attacks against companies like Bank of America and Citigroup. Iran's mendacity in our own backyard and around the world raises questions about whether Iran merits being accepted into the fold. We dismiss Iran's nefarious activities at our peril.

Toby Dershowitz is Vice President of Government Relations and Strategy at the Foundation for Defense of Democracies.

Image: Office of the Supreme Leader​