The Long Road to Fallujah and Mosul 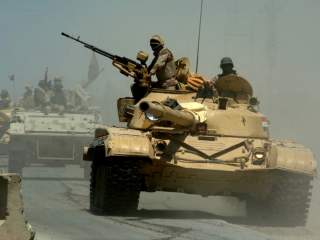 Recently, Defense Secretary Ash Carter said that more American ground troops will be needed in the fight against ISIS. This means more boots on the ground, serving in a more active role. The administration has diligently tried to limit the involvement of U.S. ground troops all along, but the campaign against ISIS has suffered for it. Despite their recent success in Ramadi, it is clear that Iraqi forces are not ready to carry the burden being asked of them, and will need U.S. forces to assert themselves more if ISIS is to be driven out anytime soon.

First, the Iraqi Army is simply not large enough to make any kind of serious advance on the other major Iraqi cities under ISIS’s control such as Fallujah and Ramadi. The Iraqi Army currently has a frontline strength of only about 48,000 troops. If we include the Iraqi national police force, that number rises to about 85,000 men. The official size of the Iraqi Army is much larger, closer to 200,000 soldiers, but most of those troops are not combat effective. In fact, Iraq’s security forces were recently rocked by a scandal when it was revealed that the Iraqi Army had 50,000 “ghost soldiers,” soldiers who had abandoned their units but were still drawing a paycheck and were still counted in the official end strength reported by the Defense Ministry.

There are simply not enough combat-ready Iraqi soldiers to take Mosul and Fallujah while also securing and holding the territory that the Iraqis have already taken back. This manpower shortage may explain why the Iraqi government, which had wisely sidelined the Iran-backed Shiite militias from the final fight for Ramadi, is considering giving the militias a role in the fight for Fallujah.

Underscoring the general ineffectiveness of the Iraqi Army, it was recently reported that most of the hard fighting in Ramadi was done not by Iraqi Army units but by Iraqi Special Forces units, while the regular Army provided security around the city. Iraq’s Special Forces are even fewer in number than Iraq’s effective regular army troops. They are simply in no position to clear and hold a city the size of Mosul.

A related factor that aided the fight against ISIS is that nearly the entire civilian population of the city had fled. Only about 10,000 civilians were still in Ramadi at the time of the city’s fall—this in a city that once had about 450,000 residents. The absence of Ramadi’s civilian population meant there was little need to worry about civilian casualties. This approach came with a heavy cost, but at least it pushed ISIS out of the city.

Fallujah, like Ramadi, has seen nearly its entire population driven out. Only about 3,000 families remain there now, in a city that was once home to 300,000 people. Air power could play a similar role in an offensive to retake that city as it played in Ramadi, but Mosul, despite having lost hundreds of thousands of its Kurdish residents as refugees, is still home to somewhere around 700,000 civilians. It is simply not conceivable that Mosul could be taken back by way of the kind of heavy airstrikes that defined the battle for Ramadi when so many civilians remain. Iraqi troops will have to clear the city house-to-house, without significant air support or use of artillery. The old city center will be a particularly treacherous place to fight, because its narrow alleyways are not accessible to vehicles.

Mosul is also much larger than Ramadi. Ramadi stretches over an area of about seventy square miles, whereas Mosul covers almost 250 square miles of territory. Add to this the fact that ISIS appears to retain greater popular support among the remaining population of Mosul than it has had in cities it has lost, like Ramadi and Tikrit. In Ramadi, a small band of elite fighters relied on heavy American bombing to clear ISIS fighters out of a city largely abandoned by civilians. There are simply not enough Iraqi elite forces to clear and hold a city the size of Mosul, certainly not without heavy U.S. air power—which will not be available because of the danger of civilian casualties from heavy bombing in populated areas. The Iraqi Army is nowhere near ready to do this, despite recent successes in Ramadi, which is why some experts think the campaign to retake Mosul won’t even begin until 2017.

Given these factors, it is no wonder Secretary Carter is preparing the public for a greater role for U.S. ground troops.

John Ford is a former Army Captain who now serves as a reservist. He is a frequent contributor on the Middle East for the National Interest and the Diplomat Magazine and has been cited as an expert on ISIS by the Atlantic Monthly. He is now an attorney with the law firm Collins Collins Muir + Stewart.