The Long War in Afghanistan May Never End 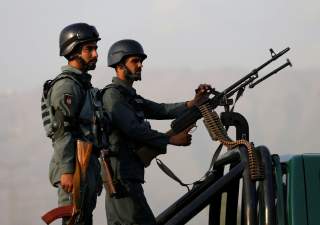 A United Nations report from last year describes the Afghanistan war as an “eroding stalemate” in which the Taliban have not only been able to expand, but also consolidate, the territory they hold.

However, recent developments, including the barbaric attack by the so-called Islamic State on the office of the Save the Children charitable organization in Jalalabad, are reminders of the need to assess the Afghanistan conflict in more than binary terms. The “eroding stalemate” is morphing into an uglier, more complicated conflict, that may soon resemble the Afghan civil war in the 1990s or even the present, intractable war in Syria, due to the absence of a holistic strategy and military escalation by all sides.

In Afghanistan, the Trump administration has notionally embraced the modest aims of its predecessor: the elimination of transnational jihadist threats and weakening of the Taliban enough that it feels compelled to come to the negotiation table. Toward this, the Trump administration has relied on the expanded use of blunt military force, a targeted increase in troops, and various forms of diplomatic pressure on Pakistan, where much of the Afghan Taliban leadership is based.

Regional actors, however, may view America’s intentions less charitably. For some, Trump’s mentioning of Pakistan’s nuclear weapons arsenal in his South Asia strategy speech last August, the criticism of China’s Belt and Road Initiative by two U.S. cabinet members, and a more assertive Iran policy suggest that an extended presence in Afghanistan serves other objectives for Washington.

Let us, however, assume that Washington’s aims in Afghanistan are indeed limited to destroying Al Qaeda and the so-called Islamic State and punishing the Taliban so that its best option is to sue for peace. Even with these modest goals in mind, the grim reality may be that the Trump administration is giving America a second chance in Afghanistan it actually doesn’t really have. And as a result of its military-first strategy, in all likelihood, the United States will end up making things worse in Afghanistan, playing a Whac-a-Mole game till it withdraws from Afghanistan precipitously.

America, it must be recognized, is very much part of the self-perpetuating ecosystem of violence in Afghanistan. It rejected peace overtures by individual Taliban leaders in the years that followed the U.S. invasion. It empowered warlords who helped breathe life into the Taliban insurgency by 2006 by targeting Taliban figures who had abandoned militancy. These warlords also abused the local populace, kidnapped young boys, making them into sex slaves, and helped restore a drug trade that the insurgency now thrives off of.

As part of the Obama administration’s “surge” strategy in Afghanistan, Washington propped up anti-Taliban militias whose brutality makes some locals see the Taliban as the lesser evil and weakens the central government’s legitimacy and writ. For example, anti-Taliban militias in the province of Kunduz extort locals “in the name of Islamic taxes.” What meaningfully distinguishes them from the Taliban, other than the fact that they are presently not engaged in combat with coalition forces? Elsewhere, in the Jowzjan province, militiamen once tied to warlord Abdul Rashid Dostum have joined the Islamic State and the Taliban, since his exiling last year.

While coalition forces have been able to stave off the Taliban’s advance in the Helmand province, Afghan forces have shown no capability of being able to clear and hold territory without U.S. handholding. The supposed gains made by Afghan forces in Helmand in recent months are easily reversible as the ones that were made in 2010 during the Obama administration’s surge. As Afghan president Ashraf Ghani said earlier this month on 60 Minutes, his country’s military would collapse in six months without U.S. financial and logistical assistance.

Meanwhile, as coalition forces tout the what they claim is progress in Helmand, the Taliban are on the verge of taking over neighboring Farah province. Methodically, the Taliban have killed senior police officials, and, according to one report, are in fact colluding with elements of the local police forces. Making matters worse, the governor of the province recently resigned after protestors besieged his office.

As the Taliban spread out further, the local Islamic State affiliate shows inexplicable signs of resilience. The origins of the Islamic State in Afghanistan has its roots in the Afghan state’s harboring of anti-Pakistan, proto-IS militants who fled the Pakistan Army’s operations in North Waziristan in 2014. As the group gained in size, last year, the Trump administration bombed its safe haven in Afghanistan’s Nangarhar province with the so-called Mother of All Bombs (MOAB). U.S. forces have, with great effectiveness, used drones to eliminate much of the group’s leadership. But the Islamic State somehow remains a powerful terrorist force. It has not only grown in size and reach, but has also assembled an attack network in Kabul that perhaps is even more capable than that of the Taliban. As the Islamic State strengthens in Kabul, back in Nangarhar, a cloud of uncertainty hovers over the anti-Islamic State campaign back in Nangarhar, after American forces bombed the anti-Islamic State militia led by Zahir Qadir, killing over a dozen of his men, in response to an attack on U.S. soldiers by Taliban infiltrators.

The worsening violence in Afghanistan takes place in the backdrop of a political crisis that could jeopardize the country’s political system itself. Ghani has made no effort at political reform, which he is obligated to under a power-sharing agreement with chief executive officer Abdullah Abdullah. Ghani has waged an unnecessary battle with Atta Noor, the governor of the Balkh province, after engaging the strongman in coalition talks early last year. In his attempt to consolidate power, the Afghan president has become a polarizing figure, further inflaming the country’s ethnic tensions. The debate over how Afghanistan should be governed—whether it should have a form of federalism or a strong central government—is a debate as old as modern-day Afghanistan itself. And it overlaps with the country’s ethnic divide. The upcoming elections, should they even take place, will deepen those divisions. If the issue of federalism is not resolved in the coming year, it may never be. Afghanistan could then see a conflict that would challenge its very integrity as a single country.

Back in Washington, the Trump administration says that it has done away with timelines and will let its strategy be guided by battlefield conditions. But there are indications that Trump’s Afghanistan options, like his predecessor’s, will be constrained by political considerations. According to a recent report in the Washington Post, Trump “wants to see a quick return on the increased U.S. investment in troops and money in Afghanistan.” The White House is also putting the Pentagon “under pressure to keep troop numbers from growing significantly.” Meanwhile, Gen. John Nicholson, the commander of U.S. forces in Afghanistan, has pledged to push the central government’s control up to 80 percent of Afghanistan’s territory by the end of 2019—in other words, before Trump hits the campaign trail for the Republican primaries.

While a negotiated settlement to the conflict in Afghanistan, as part of a regional solution, remains possible, it appears increasingly out of reach. A grim future for Afghanistan is more likely. For sure, large swaths of provinces like Farah, Helmand, Kandahar, Kunar, Nangarhar and Nuristan, will never be pacified. Illicit trade (drugs and other smuggling), will remain the mainstays of their economy, perpetuated by an informal nexus of militants, police and warlords. The growth of the documented economy may continue to be eclipsed by population growth. By 2019, the political temperature in Afghanistan will probably rise to unmanageable levels, leading to the fracture of the Afghan security forces on ethnic lines. And more Al Qaeda and Islamic State-linked jihadists could make their way to Afghanistan, to exploit the chaos. Whether America chooses to leave or stay, may not even matter. The war in Afghanistan will go on, regardless.

Arif Rafiq (@arifcrafiq) is president of Vizier Consulting, LLC, a political risk advisory company specializing in the Middle East and South Asia, and a nonresident fellow at the Middle East Institute.

Image: Afghan policemen stand guard after an attack at the American University of Afghanistan in Kabul, Afghanistan August 25, 2016. REUTERS/Mohammad Ismail​