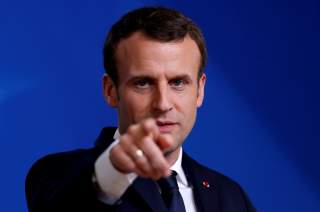 France’s military and diplomatic apparatus has also enjoyed a facelift. The French diplomatic network is already a well-oiled machine, ranking third in the 2017 Lowy Global Diplomacy Index, and Paris is quietly reallocating resources toward dynamic regions, especially in Asia. The restructuring allows France to make full use of its extensive network to transform flashpoints, such as China’s more assertive stance, into an opportunity to forge stronger bonds with Japan or India, and assert its regional presence. Building on a reputation of competence and efficiency in U.S. military circles, thanks to efforts in Afghanistan, Africa and the Middle East, France is now modernizing its military forces—its defense budget will increase by 1.7 billion Euros a year until 2023 and by three billion Euros a year beginning in 2023, setting France on course to fulfil the NATO 2 percent pledge by 2025. France has also become more competitive in the defense-exports market and is reviving its doctrinal reflection, with an emphasis on technological challenges, artificial intelligence and cybersecurity. Refurbished soft and hard power tools are ready for use.

The Foundations of a Startup Power

The ingredients were there, but the French needed a talented chef to put them all together. They found an improbable technocrat turned outsider, who claims he rejects a Darwinian world but embraces the Schumpeterian idea of creative destruction and is willing to turn a respectable yet sluggish power into an innovative proposition. With his unique audacity and self-confidence, Emmanuel Macron is playing on both style and substance to transform France into a “startup power.”

French foreign policy comes in new packaging: a disruptive communication offensive combining innovative techniques and traditional assets. Macron plays on France’s soft power when he invites Trump to the Champs Elysées and Putin to Versailles, in a demonstration of pragmatic cooperation overcoming strategic disagreements. Yet France’s unrivaled cultural and historical heritage also serves to smooth otherwise unwavering and assertive messages. The French president used his first joint press conference with Putin to call RT and Sputnik “propaganda agents” for their unfair coverage of the French election, doubling down with a proposed bill to ban “fausses nouvelles” during electoral campaigns. He trolled the American president with his now famous meme “Make our Planet Great Again”. The latter bold move made him an instant international media celebrity, without much harm to the U.S.-French relationship. Macron’s flawless English and flair for theatrical statecraft puts France at the center of international relationships in ways that considerably expand the country’s global influence.

Macron strives hard to create and entertain a network of like-minded investors, including in an area where no one dared to innovate and invest anymore: the European Union. The former Rothschild banker is deeply conscious of the potential of a distressed asset with high upside: Europe is a power multiplier for France, and he intends to convince others that it can be one for them, too. As soon as he took power, the French president started pushing for economic reforms (creation of a Eurozone budget and finance minister), political revitalization (democratic conventions on the future of the EU, treaty renegotiation) and European defense integration (permanent structures, common intervention force and doctrine of strategic autonomy). Macron’s vision is one of a “Europe that protects Europeans” from unfair trade practices outside and from social dumping inside, and a “sovereign Europe,” that proudly defends its model on the world stage. The French president made such a forceful push for change in Europe, and for Franco-German leadership, that German political parties felt compelled to try and answer France’s expectations in their February coalition agreement.

The French foreign policy’s new trademark is agility, combining swift decisionmaking, resolve and timeliness, adapted to an age when Russia throws the West off balance with its tactical surprises. Early in Macron’s tenure, France tackled the thorny problem of Libya through an exclusive meditation effort at the Celle-Saint-Cloud. France continued to surprise when it put Saudi Arabia under heavy pressure to send Saad Hariri back to Lebanon last November. It did not hesitate to circumvent the U.S. government’s skepticism on climate change by mobilizing directly American States and businesses during the December 2017 One Planet Summit. Faced with Trump’s pledge to dismantle the Iran nuclear deal, the French are adopting a two-pronged strategy: mitigating the potential U.S. decision by offering to work on the issues of Iran’s ballistic missile program and regional overreach, while playing the role of an intermediary with Teheran. Whenever core interests are at stake and tensions are mounting, it is better to strike first, and then offer a deal.

Flexibility complements agility. A staunch advocate of multilateralism, France is also pragmatic in its contours, for it knows that the United Nations is facing the assault of unilateralism and the increasing influence of States with radically different agendas, first among them China. Confronted with this reality, Macron promotes the idea that France should be “mobile and autonomous” by “opportunistically building ad hoc alliances to stay efficient” and “putting in place new multilateral frameworks.” France will continue to use its legitimacy as a permanent Security Council member to take the lead on multilateral initiatives, from universal healthcare to education and climate change, but it has also been advocating a reform of the Security Council and veto power for years. The French are tenacious in defending existing rules, yet do not hesitate to promote mini-lateral formats to achieve peace and security goals—Normandy format, E3+3, etc. On its new landmark policy priority, climate change, France revived its credibility as a bridge between North and South through the success of the 2015 COP21 conference, a model of multi-actor multilateralism. With its decision to strike Syria for its use of chemical weapons on April 14, without a clear UN Security Council mandate, France seeks to send the signal that its commitment to defend well-established international norms (in this case nonproliferation) can take precedence over its general policy to secure a consensus with major powers and the international community, at least when such norms are deemed vital to protect the international-security architecture.

Since the promise of startups is based on hypothetical future gains rather than on immediate dividends, they are particularly vulnerable to investors’ leaps in faith. France’s accomplishment as a startup power will ultimately depend on its ability to successfully reform, demonstrate internal resilience and develop a coherent international vision. In the current global context, France’s situation is favorable for lack of contestants among Western democracies. Domestic politics prevents both the United Kingdom and Germany from playing a leadership role in Europe, leaving the field to France. Trump’s America is all too happy to pass the torch. By contrast, Macron enjoys a wide mandate for shaking up institutions and habits, and foreign policy is traditionally a consensual topic in France—in 2017, 82 percent of French wanted its military budget preserved or raised, and 86 percent supported military action against ISIS.

Sustaining the momentum might prove tricky if France balks at implementing its own recommendations. Macron will be judged on his pledge to bring new dynamism to the labor market, reduce unemployment, launch modernization reforms, and attract entrepreneurs and foreign talents. France is on the right track but it is still struggling with its own demons. The political landscape is in a shambles and a failure to deliver could nurture infighting. The internal terrorist threat remains extremely high (twenty-eight attempts and three successful attacks in 2017), military forces run the risk of overstretch and the French society is still on edge with regard to identity and religion, as shown by the nervousness surrounding Macron’s project to reform “the Islam of France.” If the “Macron miracle” fails internally, it will be short-lived abroad.

France’s project is more likely to succeed if embedded in a larger incubator, building on collective innovation and outreach. Europe is France’s startup hive. The United Kingdom must exit the Union in an orderly fashion, and Germany, France’s indispensable partner in crime, needs to be willing, and able, to deliver on EU reforms. Internal European divisions will have to be healed by forcefully protecting European values without being arrogant, especially when dealing with democratic backsliding in Poland or Hungary. France might have a hard time preserving its foreign-policy agility in the context of an EU integrated framework. France will also need to help strengthen the African incubator, the world’s talent pool and growth reservoir for the next century. It is not only for historical reasons that France is dedicating efforts to promoting the G5 Sahel organization aimed at building stability under a regional leadership. A stable and prosperous Africa would open up new economic opportunities for Europeans, easing the pressure to bow in front of Russia’s assertiveness on the eastern flank.

All things considered, the biggest risk France faces in the short run is hubris, as the Western night makes its light appear even brighter. Unafraid to use force to fight terrorist groups or uphold international norms, France could antagonize less interventionist European partners, or could lose its special voice as a bridge with non-Western nations. Yet on the current world stage, even an emboldened French president is unlikely to beat his Turkish, Russian or American counterparts. For the time being, the French startup is still only bound to deliver proof of concept rather than evidence of results. Under these conditions, no wonder that Macron’s ambitions are larger-than-life: he hopes to restructure European politics along the lines of the French experiment before 2019, he posits France as a global actor for innovative solutions for peace with the creation of the future Paris Peace Forum, and he keeps refining its international image. France is busy coming back.