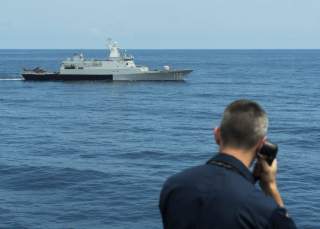 As Washington and Beijing contemplate a new series of countermoves in the South China Sea, a debate over U.S. policy objectives and strategy is quite timely. For that reason, I particularly welcome Alexander Vuving’s recent critique of my original article that lays out “Five Myths” about the South China Sea. Vuving’s essay is refreshingly candid and he illuminates several interesting arguments. I particularly applaud his focus on power and national interest, the touchstones of realist thought in foreign policy. Therefore, we may call this a friendly debate among realists—the most worthy kind of debate.

Vuving’s general perspective is most clearly revealed in the final sentence of his essay when he suggests that “the greatest myth of all is that the U.S. cannot and should not contain China.” That is a kind of cryptic way of saying that “the U.S. should contain China.” I emphatically disagree with that conclusion for all the most obvious reasons (e.g. the risk of armed conflict between nuclear powers, trillions of dollars wasted on militarized rivalry, the imperative to cooperate on climate change and nuclear nonproliferation, etc.), as do the vast majority of America’s China specialists, Asia specialists, as well as academic and policy experts in the wider field of international relations.

Never mind that Vuving is apparently so far outside the mainstream; he still makes a number of valuable points in the essay that I would actually agree with, and these points are worth underlining at the outset as our common ground or shared assessments. We are apparently agreed that “Washington’s support of Southeast Asian claimants will create incentives for them to be more assertive and aggressive.” One of the most interesting discussions in Vuving’s essay is his very frank suggestion that “the term ‘freedom of navigation’ is a bad choice of words. Its meaning varies according to the legal position of the national perspective you take.” I agree with Vuving’s point here, but this statement may separate him from most American “hawks,” who have made “freedom of navigation” their primary rallying cry. It does have a ring to it, admittedly.

But then, we are both realists, and do not wish to fight bloody wars over such ethereal and nebulous concepts as defending “the global commons.” As to whether Beijing will close the gates to South China Sea maritime trade or otherwise attempt to restrict navigation, we are again agreed that “China has enormous vested interest in keeping the flow of commerce through the South China Sea unimpeded.” It is also noteworthy that Vuving agrees with me that “the outcome of a U.S.-China war is highly uncertain.” He goes on to explain his view that the “chance of a U.S. defeat is comparable to that of a Chinese defeat.” Given the daunting constraints (e.g. surprise, geography, etc.) that U.S. forces could face in such a conflict, I concur with that conclusion. It seems thus quite clear that Vuving does not subscribe to the “clean their clocks” school among America’s South China Sea hawks. That is encouraging, and on the basis of his realistic understanding of the military balance, he does conclude near the end of his essay that “war is something that needs to be avoided.” Once again, I strongly agree with Vuving on this point.

So what is the main issue of disagreement, after all? It concerns what Vuving and others have termed “gray-zone” operations. Vuving suggests that my analysis is flawed because I am using the “wrong lens” of war/peace binary decisions when, according to his assessment, “disputes and contestation [are primarily] occurring in a gray zone between war and peace.” Thus, the claim is advanced that Washington would have had a variety of options for contesting against Beijing in the so-called “Scarborough Shoal Crisis” during spring 2012—if only Americans understood that the game is weiqi rather than chess. Vuving is highly critical of the Obama Administration for being allegedly misled by Beijing’s tricks in the so-called grey zone. Vuving actually undermines his own critique when he concedes that Manila most likely did call on Washington for “military backup” in those circumstances.

The critique is further undermined by the lack of specifics regarding what exactly were Washington’s options during that crisis—apart from calling in airstrikes. Should Washington have organized some fishing boats to contest against the Chinese fishing boats at the atoll? Perhaps Vuving and others are calling for U.S. Coast Guard cutters to go “head-to-head” with water cannons and the like against their Chinese counterparts? These are, of course, rhetorical questions, because no such feasible options exist for mounting counter–gray zone operations of this kind. Nor is it feasible to retaliate by having our diplomats and prompting sympathetic journalists to use the moniker “West Philippine Sea,” vice “South China Sea” as a smart power method to turn the tables against China. The point is that the only way to stop China’s advance in the South China Sea in its tracks is to threaten the use of force, and, barring that threat, we are mostly reliant on Chinese good will.

It is quite instructive, actually, when considering “gray-zone operations,” to think about the other classic case. Indeed, the term only really became popular in strategic studies circles after Russia’s seizure of Crimea by “little green men” in March 2014. The implication of Vuving’s argument in this critique seems to be that if the U.S. and NATO had simply understood that this was a gray-zone operation rather than being fooled by Mr. Putin, that there could have been a proper gray-zone response. Washington could respond against “little green men” with “little beige men” (U.S. combat troops in desert camo, but lacking U.S. insignia, of course). The scenario is laughable, and no such options were ever under any consideration, to my estimate. The point is that the Russian “gray-zone operation” in Crimea was successful because Moscow’s gambit also represented a clear and credible threat to resort to the use force.

True, Beijing’s shenanigans in and around Scarborough Shoal are a little less clear and credible in that respect, but the unmistakable message has been that these ships, albeit unarmed for the most part, will be defended by Chinese armed might if necessary. Arguably, the Chinese gray-zone initiatives are more clever as they are less easily condemned since they do not represent an overt use of force, but rather a veiled threat to employ force. Thus, the first and most obvious counter to Vuving’s critique is that U.S. non-military options for use in such maritime gray-zone operations do not presently exist and are not likely to be created in the next decade—no matter how many former U.S. and Japanese coast guard vessels are gifted to the Philippines.

Still, the far more potent argument beyond the relatively obvious questions regarding feasibility against countering Chinese shenanigans with American shenanigans is that neither side knows where the other’s red lines actually lie. Thus, Vuving’s prescription to “up the ante” with either containment measures or robust support for front-line states is all but certain to increase tensions, such that “sleepwalking” into a U.S.-China direct armed clash becomes a near certainty. What is ultimately so shallow, therefore, about Vuving’s line of critique and the argumentation of most hawks is they do not admit that their prescriptions necessarily entail risks associated with the slippery slope of escalation. Perhaps I’ve misunderstood him, but Vuving seems to me to be saying implicitly: “Trust me. Beijing is not really serious. This is just a game of weiqi with no actual risk of military conflict. If Washington is serious, Beijing will back down.”

This type of oblivious attitude to the risk of conflict could be excusable perhaps if China was not a nuclear power with increasingly potent conventional forces to match. In fact, this demeanor is distressingly common among hawks of the “cakewalk” school, but we have already seen that Vuving has a relatively clear appraisal of the military balance and has recognized that outright U.S. military superiority in the Western Pacific is a vestige of the past. Thus, there is a clear contradiction in Vuving’s thinking: he does not view the military balance as favorable to the U.S., and yet he recommends escalatory maneuvers.

This is not only foolhardy from a military-strategic point of view, but also starkly ignorant of history. Did the Russian czar think that he would spark the largest war in history when he opted to mobilize forces in response to the Serbian crisis in 1914? Did President Roosevelt know that he was contributing to setting the Pacific War in motion when he pushed the U.S. Pacific Fleet from the West Coast to Pearl Harbor to deter Japan from striking at Singapore in 1940? Washington clearly misunderstood Chinese intentions in 1950 during the Korean War and underestimated Hanoi’s determination when undertaking escalation in Vietnam. The point is that one hardly has to look very far to find examples of leaders, including American leaders, “sleepwalking” into major conflicts. Do we really believe our leaders are any wiser or better informed today than they were back then?