The Main(e) Lesson Trump Should Learn from William McKinley 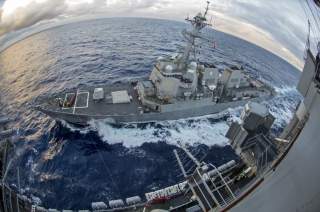 Maritime incidents—the RMS Lusitania, Pearl Harbor and the Gulf of Tonkin—heralded U.S. involvement in several twentieth-century conflicts. Today marks the start of one such conflict, the Spanish-American War, which followed the sinking of the USS Maine in 1898. Although the war took place nearly 120 years ago, it can serve as a lesson to our current administration. Much like William McKinley’s administration, the Trump administration faces a potential maritime crisis amidst public concern over the country’s foreign-policy passivity. Unlike McKinley, however, Trump cannot afford to handle a crisis—this one in the South China Sea—or its aftermath the same way.

The Maine was sent to Cuba to defend U.S. interests following unrest in Havana in January 1898. After the vessel exploded, the popular conclusion was that Spain was to blame, and both expansionist and humanitarian sentiment drove the United States to declare war in April. By July, Spain had surrendered and withdrawn from Cuba; the United States annexed the Philippines, Guam and Puerto Rico.

Islands are also at the core of the current South China Sea dispute. The Paracel Islands and Spratly Islands, as well as Scarborough Shoal, are within a maritime territory of some 3.5 million square kilometers claimed by China. Despite contestation by the Philippines, Vietnam, Malaysia, Taiwan and Brunei, China has escalated the dispute in recent years by building and militarizing artificial islands in the area. With the United States seeking to prevent Chinese expansion and conducting patrols, tensions and the possibility of a miscalculation or confrontation are high.

Politically, the comparison between the two eras can be drawn out on the domestic and the international fronts. Like Trump, McKinley had an “America first” perspective on economic policy at home, with trade protection and growth of U.S. businesses a top priority. As with the Bernie Sanders movement, McKinley likewise had to contend with the competing populism of William Jennings Bryan during his presidential campaign.

Most importantly, on foreign policy, both men share a certain personal reluctance on international involvement coupled with a mandate—and high-level support—for forceful action in case of crisis. Just as the explosion of the USS Maine provided hawks in the McKinley administration with a justification for a military response to Spain, a crisis in the South China Sea today could prompt a comparable reaction from the new government. Rex Tillerson has already stated his support for a policy of strong responses to further Chinese construction and militarization of contested islands. James Mattis and new National Security Advisor H. R. McMaster, meanwhile, may play the role of the erudite Theodore Roosevelt in pushing for a tough approach. Steve Bannon has gone one step farther than any other officials. In March 2016, he claimed there was “no doubt” that the United States would be involved in a South China Sea war in the next 5–10 years.

Due in part to Roosevelt, the U.S. Navy was well prepared for the Spanish-American War, yet poor planning and organization overall cost the United States dearly. Many U.S. troops and most mounts never left Florida due to transportation constraints, supplies and the fact that armaments were inadequate. Also, the majority of U.S. soldiers perished due tropical diseases that flourished in Cuba’s rainy summer season. In this context, whether current officials fan the flame or a crisis comes about in some other way, the new administration needs to consider all the ways in which the so-called “splendid little war” would be neither splendid nor little today if a South China Sea crisis is handled poorly.

To begin with, today’s rising China is not yesterday’s declining Spain, and has a formidable industrial base and military. There is no question that, at the very least, U.S. casualties could easily surpass the three thousand that amassed during the Spanish-American War in almost any conflict scenario. Another Battle of Manila Bay, where the Spanish Pacific squadron was destroyed at the cost of one American life, is highly unlikely.

China would also have several other advantages, including the “home court” advantage that Spain never had. Furthermore, the proximity and strategic importance of the theater to China would also mean that the country has a great deal more at stake than Spain did in Cuba. The United States maintains the best naval fleet in the world, but China’s cyber capabilities could even out the playing field by disabling or even taking control of critical technology aboard U.S. vessels. As yet an untested strategy in battle, high-profile private and state-sponsored hacks have already shown the power of asymmetric cyberwarfare in the political and commercial realms. Finally, China’s other major asymmetric advantage is its control of production of more than 85 percent of the world’s rare earth minerals. Considering how much modern technology—including military technology—is reliant on these materials, America’s dangerous dependency on them could mean U.S. planners would have to make the most of a limited supply or resort to outdated weapons and tactics.

The lesson to glean from these differences is a simple one: a very specific set of circumstances allowed the United States to achieve its military aims in the Spanish-American War despite serious failures in planning. Anything less than a well-thought-out strategy cannot achieve the same results today should China cross a red line established by the new administration. Perhaps more on this issue than on any other, Trump and his cabinet need to have a consistent game plan and consider the guidance of diplomatic, military and intelligence experts, even if the overall approach is dictated by administration objectives.

Daniil Davydoff is Manager of Global Security Intelligence at AT-RISK International and director of social media for the World Affairs Council of Palm Beach. Daniil has been published by Foreign Policy as well as RealClearWorld, among other outlets. His views do not reflect those of his company.