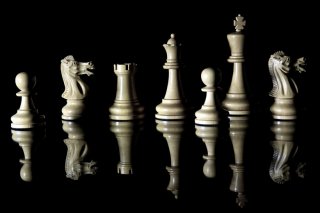 A note from TNI’s Executive Editor Harry J. Kazianis: The following is the final chapter of Professor William Martel’s new book Grand Strategy in Theory and Practice: The Need For an Effective American Foreign Policy (please see reprint permission at the end of the chapter). Martel passed away on January 12th after a long battle against leukemia.

Martel was an Associate Professor of International Security Studies at The Fletcher School, Tufts University. He also served as a Senior Foreign Policy adviser to Governor Mitt Romney during the 2012 Presidential Campaign. Martel was a friend and colleague to many of TNI’s editors and staff. On behalf of TNI, we send our personal condolences to his family and the Fletcher School community. He will be greatly missed.

The purpose of this book is to provide a framework that helps guide scholars and policymakers as they articulate and implement a grand strategy. A coherent grand strategy, which plays a fundamental role in guiding the state’s foreign and domestic policies, is key in times of both peace and war because only it provides the broad sense of direction, clarity, and vision that policymakers, operating at the highest levels of government, need as they make difficult and consequential decisions. Fundamentally, grand strategy describes a broad consensus on the state’s goals and the means by which to put them into practice.

To this end, Part I of this book examined analytically the evolution of the concept of grand strategy. It described grand strategy as a concept in the theory and practice as states, ancient and modern, conducted their foreign policy. It defined grand strategy as the state’s highest, overarching strategy that considers the long-term consequences of using all instruments of national power, including its military, economic, diplomatic, and informational capabilities. When scholars describe a “hierarchy of strategies”—which in ascending order evolve from tactics, operations, and military strategy to ultimately grand strategy—what emerges is the observation that grand strategy operates at the broadest and most conclusive level for the state.[1] Definitional precision is essential, because, for example, when the state conducts policies, including when it uses military force, its ability to succeed depends in part on whether those policies link directly to and are consistent with the state’s overarching grand strategy. In all cases, grand strategy should govern all the decisions that operate at the lower levels of strategy, and it is likewise the case to ensure that the lower levels never determine or directly influence the state’s grand strategy.

Thus, grand strategy provides guidance to the affairs of the state in the broadest conceptual sense. In the hierarchy of interests and principles that guide a nation’s overall approach to foreign policy, grand strategy provides the central organizing framework or consensus that guides how policymakers articulate and implement their policies. It is precisely because grand strategy, when properly defined and practiced, exerts the greatest influence on foreign policy that it deserves considerable attention and study. Yet policymakers also find that it is difficult to articulate and implement grand strategy effectively, for reasons that are discussed in more detail below.

This first and perhaps most challenging attribute relates to the confusion that surrounds defining the term ‘grand strategy’ clearly. Whereas earlier thought about grand strategy centered on military strategy and how to handle serious if not existential threats to the polity, the current problem with grand strategy runs much deeper. At present, we need to define grand strategy in ways that help policymakers more effectively incorporate domestic economic priorities along with diplomatic and military considerations into the nation’s broader strategy.

The second attribute of grand strategy is that it should encompass all dimensions of policy and doctrine, including the domains of operations and tactics. In every sense of the word, grand strategy implies an integrated and inclusive approach to the policies that the state pursues in order to achieve its desired ends. Less-than-successful grand strategies often fail precisely because they do not base the nation’s policies on a coherent and agreed-upon set of the nation’s foreign and domestic policy goals. Put another way, the success of a grand strategy derives from its ability to completely integrate the military and nonmilitary elements of the state’s policies in a coherent, consistent, and effective manner.

The third attribute examined in this book is that articulating and implementing grand strategy is a never-ending process. Formulating grand strategy should not begin when a crisis grips the state or end during periods of relative peace and calm. Policymakers and scholars should be constantly reassessing the strategy, its relevance, and utility as it shapes and is reshaped by domestic and international influences. The conduct of grand strategy is as relevant to the conduct of policy in peacetime as it is during periods of war. It is a failure for the state if discussions about grand strategy occur only after the nation finds itself facing an imminent risk or crisis. If policymakers ignore grand strategy until the moment of a crisis, which unfortunately is a recurring pattern for democracies, the nation will experience unnecessary risks, confusion among allies and adversaries, and polarizing domestic debates.[2] One premise in this book is that while grand strategy often evolves in response to significant, even if not necessarily existential threats, it should not disappear from the public debate simply because the state does not face an obvious enemy or adversary. On the contrary, grand strategy should always be foremost in the minds of policymakers as they strive to ensure that the state’s policies align with its overall strategy.

The fourth attribute is that grand strategy should guide the state as it marshals all of its resources—human, political, economic, technological, and military, among others—to defend and promote its long-term interests. While often ignored or misused, this attribute has been a prominent feature in the study of grand strategy as far back as the writings of Thucydides, then Machiavelli, and more recently as the United States mobilized itself to fight the First and Second World Wars and later the Cold War. This attribute first emerged prominently in the strategies pursued by the antagonists during the Peloponnesian Wars, to the struggles among Italian city-states during the Renaissance, and to the wars of the Napoleonic Age when states learned how to mobilize their entire society for the conduct of foreign policy, including war. By the late nineteenth and early twentieth centuries, the challenge for grand strategy was how to mobilize society for the conduct of foreign policy by marshaling all of its resources but without bankrupting the state.

The fifth defining attribute is the concept of balancing ends and means in grand strategy. From Thucydides’ writings, to the ideas articulated by so many of the classic theorists, to the rise and decline of the Ottoman and Soviet Empires, to the economic resources that the United States devotes to foreign policy—no issue has played a more prominent role in the articulation, implementation, and eventual success (or failure) of grand strategy than the ability to balance means and ends. This classic means-ends balance is of fundamental prominence as policymakers struggle with how to articulate and implement the state’s grand strategy in the face of perpetually evolving economic and political constraints. This challenge presents a lesson in the perils of overreach, which is all-too-common when states miscalculate what level of resources and public support their grand strategy calls for.[3] As first discussed in Chapter 3 and subsequently throughout the book, the relationship between means and ends is an intellectual centerpiece of grand strategy.[4]

The sixth attribute relates to the idea that an effective grand strategy must reflect a fundamental political, philosophical, and ideological unity among the state’s goals and policies. Since its purpose is to defend and promote the state’s interests, the central function of grand strategy is to ensure that the means by which those objectives are pursued closely align with the state’s national character and political tradition and culture. This critical element has been revisited time and again throughout the development of grand strategy. Notably, this attribute was evident during the American Civil War when President Lincoln was reluctant to engage in total war because he feared it would lead to the destruction of the country that he so desperately sought to protect. In modern times, various U.S. presidential administrations struggled with how to develop the grand strategy of containment during the Cold War, whose credibility derived in part from the threat to use nuclear weapons, without having to destroy the nation and civilization itself.