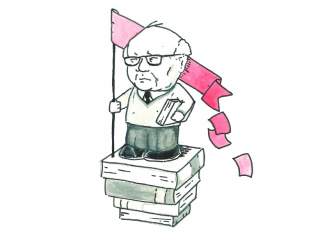 In his essay “Unpacking My Library,” Walter Benjamin observed, “ownership is the most intimate relationship that one can have to objects. Not that they come alive in him; it is he who lives in them.” It’s a sentiment that Chimen Abramsky fully shared. Abramsky transformed his home near Hampstead Heath into one of the most important private libraries on socialism and Judaism in the world. Books invaded every corner of his house—excepting the kitchen, where his wife Miriam whipped up lavish meals for the members of his salon that ranged from E.P. Thompson to Eric Hobsbawm, from Arnaldo Momigliano to Haim Ben-Sasson. A bookseller for decades, he became a consultant to Sotheby’s, a senior fellow at St. Antony’s College and Goldsmid professor of Hebrew and Jewish Studies at University College London.

Scholars from around the world beat a path to Chimen’s doorstep. Some were eager to see his original edition of the Communist Manifesto with Marx’s own scribbled marginalia; others, his upstairs study where this bibliotaph kept his greatest treasures under lock and key, including first editions of Spinoza’s Tractatus Theologico-Politicus, printed in Amsterdam in 1670, and Descartes’s Meditations, not to mention a Bomberg Hebrew Bible printed in Venice in 1521.

His eye for the genuine article could not have been keener. About a rare 1888 edition of The Communist Manifesto, for example, he wrote to a friend: “In some copies there is also a misprint; after Fleet a comma follows and then the word St. There are many reprints but they have slightly different woodcuts. I could easily recognise it if I could see it.” He acquired parts of Eleanor Marx’s library, which included six draft pages of Marx’s Theories of Surplus Value and a cache of Marx family letters, one of which the old man had signed as “Dr. Crankey,” another as “Old Nick.” His greatest lament apparently was that he didn’t possess any original issues of Marx’s Neue Rheinische Zeitung, which was published in Cologne in 1848. With socialist and communist books in Russian, German, Yiddish, French, English and Hebrew stacked on his shelves, the question wasn’t what Chimen had but what he didn’t.

If this is all there were to the story, it would be intriguing enough. But in his fascinating The House of Twenty Thousand Books, Sasha Abramsky, a grandson of Chimen who frequently visited him and was expected as a boy to participate in debates about everything from Rosa Luxemburg to nuclear disarmament, shows that there is more to it than a case of staggering erudition married to acquisitiveness. He traces his grandfather’s ideological odyssey from British communist to exponent of liberal Zionism. Throughout, Abramsky carefully sets it in the context of wider intellectual debates of the past century by exploring, room by room, great thinker by great thinker, Chimen’s Aladdin’s cave of books. Vividly written and well-researched, Abramsky’s memoir is seldom less than absorbing.

According to Abramsky, Chimen’s father Yehezkel, a legendary rabbi whose funeral in Jerusalem in 1976 was attended by forty thousand mourners, possessed a photographic memory. By age eight, Yehezkel had memorized the Pentateuch and would astonish the locals in his village in Eastern Europe by reciting any Jewish religious text he was asked to reproduce. Chimen, who was born in 1916 in what is now Belarus, himself evinced similar prowess: “In the rare instances,” writes Abramsky, “when Chimen could not respond to a question off the top of his head, he knew exactly which of his tens of thousands of books contained the answer, what page the information was on, and where along his many double-stacked bookshelves the volume could be located.”

As a child, Chimen witnessed the burning down in 1920 by Polish soldiers of his family home during the Russian civil war. Abramsky speculates that the story of the fire, which destroyed his father’s books and personal correspondence with leading rabbis of Byelorussia and Lithuania, may help to account for Chimen’s insatiable urge to acquire books. He notes, “Chimen spent a lifetime insulating himself from the flames, surrounding himself with so many books and so much knowledge, that something could be guaranteed to survive out of the ashes, out of the chaos of history.”

More upheaval arrived when Stalin’s secret police arrested his father in Moscow in 1929 for coediting a Hebrew journal called Yagdil Torah. After being beaten in the Lubyanka prison, Yehezkel was sentenced to five years’ hard labor in Siberia. In an incredible feat of endurance and mental power, he continued to work on what would become a twenty-four-volume work on the Tosefta, scribbling his commentaries on translucent cigarette papers. In 1931, on Yom Kippur, he was released from the gulag. His passport was confiscated. He was given a month to leave the Soviet Union. Yehezkel traveled, via Riga, Vilna and Berlin, to London with his two youngest sons. Stalin, however, kept his two oldest sons, Moshe and Yaakov David, as hostages. It took an international campaign and the intercession of Anthony Eden, then Britain’s foreign minister, to secure their release in late 1936, the year of the first of the three great Moscow show trials.

None of this, however, dissuaded the young Chimen from adopting the Marxist creed. Quite the contrary. When he wrote his biography for the Communist party in 1950, Chimen did not shrink from the hideous declaration, “my parents are very reactionary. For a short time my father was imprisoned in Russia.” Chimen had started on the road to Marxism at the age of fourteen in Moscow, where he attended Jewish Communist clubs. Marxism must have given him the sense that he was one-upping his learned and devout father, that he was on the cutting-edge of history, not a fossil like the orthodox rabbis who, as far as possible, abjured the modern world. By the time he was sixteen and living in London, he sent a letter to his cousin Shimon Berlin that explained: “I read especially historical and political-economy books, written from a Marxist point of view, because I consider myself a Marxist.” He secretly started attending classes at Marx House in Clerkenwell.

Abramsky notes that like many on the left in Europe, Chimen looked to the Soviet Union as a shining beacon of antifascism that could stand up to Nazism even as the Western democracies pursued appeasement policies. But there was also a personal element: “As a young man, Chimen wanted, desperately, to stand up and be counted in his own right. Myopic, stunted in height, flat-footed, averse to physical exercise and sports, he knew that he was never destined to be a hero on the battlefield. But he wanted to make up for it in the arena of ideas.”

In 1935 he moved to Jerusalem, where he studied at the Hebrew University and was elected general secretary of the Students Federation of Palestine. He helped to organize May Day parades, publicly defended the Moscow show trials and was beaten up by future Israeli prime minister Yitzhak Shamir. Upon return to England, where the outbreak of World War II prevented him from traveling back to finish his degree in Jerusalem, he was not immediately able to join the Communist Party of Great Britain because until 1941 it did not accept stateless foreign nationals. Once this policy was rescinded in 1941, Chimen and his wife, whom he had met while working at her father’s bookstore, joined the local East End branch. “To be in the Party,” Abramsky notes, “was to be a fully fledged devotee; one could not join by half measures. For both Chimen and Mimi, shorn of the religion of their childhoods, it served as much as an expression of faith as of political intent.”

During World War II the British Communist party played a key role in compiling evidence on the Holocaust. It published pamphlets documenting the genocidal acts of the Nazis, including the use of mobile gas chambers and the mass shootings by the SS Einsatzgruppen on the eastern front. In 1943, Chimen edited a pamphlet calling upon British Jews to “help the great heroic Red Army.” Then came the publication of The Black Book: the Ruthless Murder of Jews by German-Fascist Invaders. It was compiled by the Russian writers Vasily Grossman and Ilya Ehrenburg, who had visited the liberated concentration camps to document the horrors that the Nazis had perpetrated. “For Chimen and his fellow Jewish Affairs Committee theoreticians, during the war years and well into the postwar period, the answers to the grotesque questions raised by the Holocaust were simple,” Abramsky writes, “even when they often seemed contorted to outsiders.” Stalin, they believed, was an antifascist who had abolished anti-Semitism in the Soviet Union. This was not an uncommon view; Harold Laski sent Chimen an October 4, 1947, letter declaring, “like all Jews I am deeply impressed by the way in which anti-semitism has been overwhelmingly destroyed in the Soviet Union...” Meanwhile, the real danger of a recrudescence of fascism, of a new movement that tried to finish off what Hitler had begun, existed in the capitalist West, or so Chimen and his comrades believed.