The Master Plan: How to Avoid a Dangerous U.S.-China Rivalry 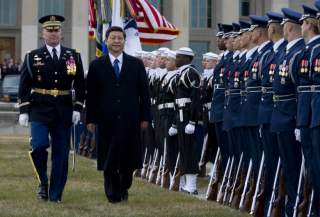 By: James Steinberg and Michael O’Hanlon

James Steinberg and Michael O’Hanlon’s recently released volume is hardly the first analysis of the U.S.-China power transition, but it is one of the most important to date. In Strategic Reassurance and Resolve: US-China Relations in the Twenty-First Century, Steinberg and O’Hanlon offer an approach to limiting competition and reinforcing strategic cooperation between the United States and China. Free of the teleological fatalism common to most structural power transition arguments, as well as the unguarded optimism of interdependence-based analyses, the authors begin with the premise that in the 21st century, US-China conflict is possible, but not ineluctable. Theirs is a scholarly, accessible effort to lay out proposals to help Washington and Beijing avoid arms racing and crisis instability by providing reassurance about each state’s strategic goals, mitigating potential security dilemmas. The analysis makes no a priori assumptions about Beijing or Washington’s long-term intentions, but persuasively contends that the two powers may nonetheless be able to avoid counterproductive hedging and persistent rivalry.

The authors are uniquely positioned to conduct this analysis. Steinberg, a former Deputy Secretary of State and Deputy National Security Advisor, now Dean of Syracuse’s Maxwell School, has extensive experience conducting diplomacy with Beijing and is intimately acquainted with the most sensitive issues in the US-China relationship. O’Hanlon, a senior fellow at the Brookings Institution, is a leading analyst of operational and strategic issues. The authors’ expertise combines to produce a work that is systematic and rigorous, while being clear and pragmatic.

At the core of Steinberg and O’Hanlon’s argument on how to avoid crisis and arms race instability is the idea of “restraint.” Without undermining their own national interests, they contend, China and the United States can forgo potentially threatening technologies, doctrines, and policies to reveal and reinforce benign intentions towards one another. The authors focus primarily on unilateral, informal limitations that each country may choose to adopt. As in a multi-move prisoner’s dilemma, if voluntary restraint results in reciprocity, long-term bilateral cooperation may be sustainable. In addition to restraint, Steinberg and O’Hanlon also emphasize “reinforcement,” or actions that make declared assurances more credible, “transparency” to help each side understand the other’s capabilities, and “resilience,” so that each side is less vulnerable to preemption or escalation. They also underscore, but devote less attention to “resolve,” which they define as each side clarifying the objects over which it is willing to fight.

After detailing the sources of conflict in the US-China relationship, Steinberg and O’Hanlon explain how their strategic reassurance framework may be put into practice in several key areas. These include restraint in military spending and modernization, approaches to enhance crisis stability in most-likely regional military contingencies, measures to reduce competition in the nuclear, space, and cyber domains, and suggestions for restraint in the areas of forward basing, deployments, and operations. Each of these chapters yields two dozen concrete policy recommendations, which are collected in a useful appendix. The recommendations range from fairly modest (advanced notification of weapons tests, and military exercises and deployments in sensitive areas) to much more ambitious (a commitment by the US to recast Air-Sea Battle as Air Sea Operations; a Chinese promise of peaceful resolution over Taiwan). Although some observers on both sides of the Pacific may reject some of these recommendations as too accommodating, one is left with the feeling that there are myriad sensible, specific ways that Washington and Beijing can attempt to mitigate the risk of conflict without resorting to inflexible, formal arrangements that require exhaustive negotiations or intrusive verification procedures.

Beyond its constructive pragmatism, however, Steinberg and O’Hanlon’s analysis raises several additional questions for scholars and strategists. How can the US and China can detect true restraint in the other as well as the intention behind it? How can the United States convince the Chinese to agree to the authors’ proposals given the pressures and incentives of the power transition? What precisely are the implications of strategic reassurance in the bilateral US-China relationship for US alliance and deterrence policies? I briefly consider each of these in turn.

The authors’ argument emphasizes the role of unilateral military restraint as a signal of each country’s benign intentions that may produce virtuous cycles of cooperation and mitigate security dilemmas. But how exactly does one state prove to the other that it has exercised restraint in its military pursuits? And how does one state parse the intentions behind the actions of the other? For example, would Washington believe Beijing if it declared that it had not deployed as many anti-ship ballistic missiles as it might have? Will the Chinese believe their American counterparts if they insist that ballistic missile defense deployments remain limited out of respect for Beijing’s strategic concerns, rather than because of technological and domestic political considerations? It is difficult, if not impossible, to prove a negative, as the authors acknowledge, and the reasons that one power forgoes a military opportunity may be manifold, rather than primarily motivated by the concerns of the other. But insofar as strategic reassurance requires the United States and China to recognize and reciprocate one another’s acts of restraint, whether and how the two powers can credibly communicate their forbearance and the intentions behind it is no small matter.

A second set of questions concerns how US policymakers can convince their Chinese counterparts to adopt Steinberg and O’Hanlon’s thoughtful recommendations, given the prevailing incentives of a power transition. At present, the US and China have few formal agreements between them, and many of the informal arrangements the authors suggest are modeled off of Cold War initiatives adopted by the United States and Soviet Union. The Incidents at Sea Agreement, Open Skies, and all formal arms control, however, were concluded during the second half of that conflict. One explanation for this superpower collaboration is that by the late 1960s, the balance of power no longer appeared to be in flux, giving both sides good reason to lock in the status quo and promote stability. Another is that the Cuban Missile Crisis placed into sharp relief the fact the US and USSR had mutual interest in military cooperation, and that the benefits of stability outweighed possible gains from arms racing and freedom of action. The authors acknowledge that the Chinese have not experienced a strategically transformative crisis of their own, but the point is broader than this. The US-China competition is not a static Prisoners’ Dilemma, but one whose payoffs are changing over time. While both sides can and do acknowledge the dangers of potential conflict, when it comes to cooperation, the United States is necessarily motivated by a better-now-than-later logic, while China is driven by a better-later-than-now calculus. The authors clearly note that Beijing will have to accept certain asymmetries for some of their proposals to be viable. But the question still remains: Even if its strategic intentions are ultimately benign, how can China be convinced to accept those asymmetries today, rather than put off an agreement until tomorrow, when restraint for the purposes of confidence building will allow them to secure a relatively more advantageous position?

Finally is the question of how Steinberg and O’Hanlon’s strategic reassurance framework interacts with US alliance commitments in the region. Although their title includes “resolve,” which comprises deterrence and alliance commitments, the analysis and policy recommendations focus almost entirely on the US-China relationship. The authors note that “careful attention needs to be paid” to interactions between the United States and its allies, averring that the US should focus on defensive measures that demonstrate resolve without contributing to crisis instability. This makes good sense. But, if, as the authors suggest, Japan is to take primary responsibility for the defense of the Senkakus, with the US playing a less assertive, rear-area role so as not to provoke Beijing, then Washington will have to expect Tokyo to develop defensive doctrines and capabilities to meet its needs in those contingencies. The United States’ desire not to overemphasize its alliance and deterrence commitments for the sake of building confidence with Beijing may result in independent actions by regional partners that could, in turn, be seen as provocative in their own right.  This dynamic is part of a broader alliance security dilemma, and a balancing act that will have to be carefully tended in the coming years.

Steinberg and O’Hanlon offer a realistic assessment of the challenges ahead in the US-China relationship. The three issues raised above will hardly surprise them, and they cannot be tasked with solving the alliance security dilemma or the prevailing alignment of incentives in a power transition in a succinct 200-page analysis. For scholars and policymakers who hope to see many of their recommendations adopted, as this reviewer does, these big-picture considerations will, however, be important to implementation. Ultimately, Steinberg and O’Hanlon’s great contribution is in laying out a nuanced, yet clear-eyed plan to reduce the risk of great power conflict in the 21st century’s most consequential bilateral relationship. As the authors themselves argue, the United States’ and China’s long-term intentions are unknown, unknowable, and dynamic. But if there exists an approach to avoiding dangerous rivalry and promoting stability in spite of this, it is Strategic Reassurance and Resolve.