The Media’s PC Coverage of the New York Cop Executions 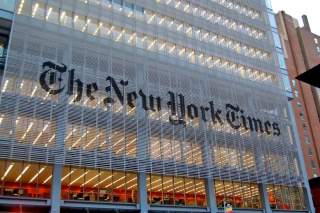 When New York police officer Yuseff Hamm was on the job on December 13, monitoring protests against police violence, he heard a chant that struck him as a bit shocking. It was part of the ongoing protest against the recent police-related deaths of unarmed black men in Ferguson, Mo., and New York City.

“What do you want?” yelled the protest leader.

"Dead Cops," came the reply chant from the lips of many.

"When do you want them?"

The hatred reflected in such blood-thirsty words by so many in a public square, directed indiscriminately against an entire class of citizens dedicated to public safety, certainly merits attention and condemnation. But you didn’t hear much outrage from the mainstream media, from commentators (except for strong conservatives), or from politicians. You certainly didn’t hear any words of concern from President Obama, who likes to weigh in whenever tragic events can be construed even remotely as reflecting on American race relations. Or from New York City Mayor Bill de Blasio, who actually supported the protests in his city, even though they disrupted the lives of his citizens by tying up traffic on widely traveled roads and bridges.

Then, hardly a week after that disturbing December 13 protest, the protesters got their wish—two dead New York City police officers who were sitting in their patrol car and were gunned down by a mentally unbalanced gunman animated, it seems clear, by the emotions surrounding the protests against the police. Is it fair to blame the protesters, even a little bit, or Mayor de Blasio for the senseless and tragic fate of officers Wenjian Liu and Raphael Ramos on Saturday?

Perhaps not. But it’s a fair question, and protest leaders were quick over the weekend to disclaim any responsibility for the action of one deranged killer. “Today’s events are a tragedy in their own right,” said a statement from one protest group, Ferguson Action, and '”to conflate them with the brave activism of millions of [protesters] across the country is nothing short of cheap political punditry.’”

An understandable response. But what about those who conflated two tragedies involving police officers struggling to deal with people resisting arrest with a perceived national problem of racist cops? It wasn’t just the protesters who did that. President Obama did too, as did Mayor de Blasio.

This dichotomy reflects a mindset prevalent in elite liberal circles in which isolated events are viewed as reflecting major national problems when they are the problems these liberals want to highlight and attack. But, when other isolated events seem to others as reflecting different problems that liberals don’t care about (or perhaps are complicit in), then any such conflation is considered illegitimate.

This mindset was reflected in some of the news coverage of the Liu and Ramos killings. In the New York Times article, updated at 3:20 p.m. on Sunday (hence, after the reporters and editors had ample time to gather and assess the details of the case), important contextual elements were omitted or pushed far down in the story. Paragraph four reveals that the killings came "at a time of heightened tension between Mayor Bill De Blasio and the Police Department." But so far in the story there is no suggestion that the killings could be related to the anti-police protest movement or the deaths of black men that triggered it.

Paragraph five says, "In a stunning show of disapproval and disrespect [a little editorial comment there], police officers, led by union officials, turned their backs on [de Blasio] Saturday night when the mayor went to the hospital to talk about the two officers who were killed." But we still don’t know about the killer’s motives or mindset when he set out to kill two policemen. Neither do we know his race.

It wasn’t until paragraph nineteen that the reporters revealed that the killer, Ismaaiyl Brinsley, sent out electronic messages tying his projected actions to the two racially charged controversies—first, the fate of Michael Brown, a young black man, killed by a white Ferguson, Mo., police officer who wasn’t indicted for his action; and a grand jury refusal to indict a Staten Island officer after a botched arrest attempt led to the death of a black man named Eric Garner.

It wasn’t until paragraph 36 that the Times piece begins to put the tragedy into the context of the protest movement. The article ends by saying the killings seemed reminiscent of an episode 40 years ago in which two New York police officers were gunned down when they walked out of a diner. No context for that shooting is given.

But former New York Police Commissioner Raymond Kelly gave a hint during a recent anniversary commemoration of that sad event. "That was a violent neighborhood, no doubt about it," he said, "and violent groups like the Black Liberation Army were specifically targeting police officers for assassination." So it turns out that those actions of forty years ago, which reminded old-timers of the Saturday police assassinations, were race-related events. We know this from Kelly’s oblique comment, quoted in the Times story, but the Times reporters themselves don’t bother to tell us or elaborate on Kelly’s intriguing comment. Indeed, they don’t even note that Brinsley was a black man, which in the context of this story certainly seems relevant.

Compare this journalistic performance with the straightforward lead of the New York Post coverage: "Two uniformed NYPD officers were shot dead Saturday afternoon as they sat in their marked police car on a Brooklyn street corner—in what investigators believe was a crazed gunman’s assassination-style mission to avenge Eric Garner and Michael Brown." The headline: "Gunman executes 2 NYPD cops in Garner 'revenge.'" The Post reported that Brinsley’s threatening missives used the hashtag "#ShootThePolice"—a detail not found in the Times coverage.

Thus the Post immediately links the killings with the emotions surrounding the Garner and Brown episodes. This seems obvious and simply good journalism. So why did the Times find it so difficult to be similarly straightforward in its rendition of events?

And the Times wasn’t alone. The USA Today article on the police killings went even further in keeping fuzzy any connection between those events and the racially charged protest movement that waxed so starkly in recent weeks against the nation’s police forces.

This is not to argue that these newspapers should have taken it upon themselves to draw a direct line between the anti-police protests and the Saturday tragedy in New York. Good journalism lets readers decide such matters and also lets such issues be pursued through civic discourse (and on editorial pages). But, when there is an obvious contextual situation worthy of debate, journalists shouldn’t obscure it or fuzz it up.

Perhaps it’s worth noting the reaction of Yuseff Hamm, the police officer subjected to the "Dead Cops" chant at that New York protest a week before the Liu and Ramos killings. As Hamm, who is black, said to Reuters afterward, "When you have a chant going on like that and no one addresses it, and then a week later, these killings come to fruition, I’m shaken."