The Media's Self-Defeating Outrage over Trump and Russia 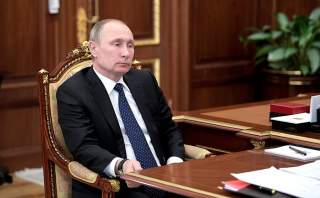 All states lie, and all states kill. This is a truth every adult is aware of, but one easily forgotten in free countries such as our own, where citizens are so safe in their opinions that they can easily persuade themselves that our government never willfully does wrong, it only makes mistakes. So when Bill O’Reilly recently asked President Trump how he can respect Vladimir Putin, even though “Putin is a killer,” the president shocked the gatekeepers of orthodox opinion in our land by responding, “There are a lot of killers. We have a lot of killers. Well, you think our country is so innocent?”

A comparison is not the same thing as an equivalence. President Trump was not saying that political murders in Russia are morally identical to the Iraq War, which was the example he gave of killings connected to our government. Rather, the president was deflating the presumption that U.S.-Russia relations should be conducted as if between a confessor and a penitent or a jailer and an inmate. Killers come in many different kinds, but they all have to mingle in the prison yard. That’s the nature of relations between states, and respect is called for, though moral approval certainly is not.

The New York Times editorial board is among the authorities to take exception to this. The paper’s objections are, however, a study in democratic delusion—not about the nature of Putin’s Russia, which is indeed increasingly illiberal and deadly dangerous for Putin’s critics, but about the U.S. government’s moral standing and what Washington can accomplish by adorning its policies with a tinsel halo.

The Times calls catastrophic initiatives like the Iraq War “terrible mistakes.” But the editorial pardons “presidents who took military action” whenever “driven by the desire to promote freedom and democracy”—as if the ends justify the means. This is confused thinking, a mixture of mythology and half-understood Realpolitik. The successful examples the Times gives are those of Japan and Germany being democratized after World War II. But the United States did not enter the Second World War to promote democracy or freedom—the United States got into the war because it had been attacked. Even before Pearl Harbor, U.S. policy was not primarily ideological but interest-based: the United States had the most practical of concerns about Japanese and Nazi supremacy in Asia and Europe. More ideologically driven wars have been less successful.

That leads to a second point that must be driven home: in reality, the ends only justify the means when the means are successful, or at least have excellent odds of success. (This is in fact a criterion of traditional just-war theory.) To go to war in the way George W. Bush did in Iraq, without anything other than wishful thinking as a contingency plan for dealing with an insurgency or whatever else might go wrong, is worse than a mistake; it’s morally criminal.

The myth of the United States as an almost angelic enforcer of justice, if sometimes an inept one, gives rise to much mischief, in the press as well as in the policy realm. It creates the temptation to overlook difficult details in the name of simple moral clarity. Journalists pressure one another, and together pressure officeholders, to substitute dudgeon for careful calculation. Moral mythologizing also creates a misleading impression of what states really are and what they are capable of doing. Even the most liberal, democratic and benign of states is not designed for the promotion of values; rather, what states excel at, when they excel at anything, is establishing security for themselves. President Trump plausibly claims that Russia can be beneficial to American security in the fight against ISIS. The president’s critics would forgo that benefit and pursue a moral objective instead. That would be appropriate for a church, or indeed a newspaper. But for a state, it’s a misplaced priority.

There is a grave need for more realistic and historically grounded thinking from the press and policymaking class, and more self-awareness, too. It’s hard to imagine there would have been such uproar if President Trump had said he respects China’s Xi Jinping. Would Bill O’Reilly have replied that Xi is a killer? Yet China’s human-rights abuses dwarf those of Russia: there is good reason to think the regime executes Falun Gong religious dissenters and harvests their organs, a horror less comparable to Putin’s Russia than to Stalin’s USSR. The Chinese, however, are economically indispensable to the West, and indeed have much closer business relations with Western media, and the companies that advertise in print and on the air, than the Russians do.

The selective outrage in which our media indulges is not really moral at all, it’s in part merely faddish—once a critical mass of pundits adopt a message, too many others parrot along—and in part self-deceiving, arising from a failure to be honest about the ugliness of power politics always and everywhere. There is also a cynical selectivity engaged in by outright ideologues and partisans who favor (or disfavor) some repressive regimes over others. Russia is a particular target for multifarious reasons, not least the residual Cold War enmity that persists in neoconservative and liberal hawk circles.

Our media is on a firm footing in criticizing all oppressive regimes—as well as in holding our own government to account for its abuses, no matter how noble we wish to believe its motives to be. But in examining relationships between states, power and history can never be afterthoughts. A president cannot afford to place ideals first and security second. And while the press is never wrong to condemn injustice, wherever it occurs, the press also has a duty to inform the public about just how complex and distant the relationship between statecraft and morality can be. In each of the past two administrations, the president’s moral reach far exceeded his practical grasp—leading to debacles in places like Iraq and Libya. President Trump seems to have learned from his predecessors’ mistakes, but it’s not clear that his critics have.