The Method to Rand Paul’s Madness 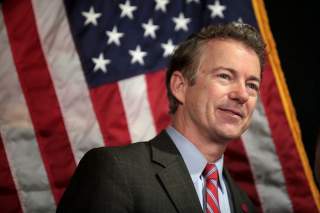 For somebody aspiring to occupy the White House, Rand Paul is taking some obviously bold—and, in some quarters, unpopular—stands on foreign policy and national security.  Republicans in particular have almost uniformly lambasted Paul over his positions on reforming the National Security Agency (NSA) and how to combat the Islamic State (IS), and most commentators agree that Paul is too contrarian to pass muster in primary season. But is the outspoken Kentuckian really authoring his own political demise or are there sound strategic reasons for Paul’s steadfast refusal to toe the party line?

In fact, a strategy of separation from the Republican mainstream is probably Paul’s best bet for building support for his particular brand of politics. Being different might not win him the mantle of Republican Party nominee (let alone the presidency) but it does not follow that Paul should eschew differentiation altogether. Consider the field that Paul finds himself a part of. There are now around a dozen serious candidates for the GOP nomination, and almost all of them tend to agree with one another on foreign policy—or, perhaps more accurately, they tend to avoid disagreeing with one another on foreign policy.

In particular, the common theme emanating from Republican hopefuls is that President Obama’s foreign policy—if they accept that Obama has a coherent foreign policy, of course—has failed, and that a more robust national security posture is needed. Understandably, few want to overtly endorse the policies of George W. Bush—usually preferring, instead, to fall back on the tried and tested Republican trope of evoking Ronald Reagan—but the common message is fairly easy to discern, even if it is woefully underdeveloped: that the United States ought to be more aggressive on the world stage in order to deter potential aggressors and defeat those who already pose threats to national security.

Leaving aside for a moment that Rand Paul likely does not agree with this mainstream Republican consensus (as if, somehow, personal convictions are not reason enough for a politician to stick to their guns), it still makes little sense to suggest that Paul should dilute his positions and allow himself to be subsumed into the overcrowded center ground. For without radicalism, what does the Paul campaign have to offer the Republican electorate? Paul is not the clear frontrunner; he does not boast the wealthiest backers; he is not the most well-connected candidate; and he has no executive experience to his name. Moreover, it is hardly the case that Paul’s libertarian brand of domestic politics will be enough to sweep the primaries.

In other words, playing it safe is hardly good advice for a candidate like Rand Paul. Boldness, distinctiveness and a capacity to generate something close to excitement are Rand Paul’s “killer apps.” It makes perfect sense that he would play to these strengths.

Still, it is understandable that many on the right balked at Paul’s comments that GOP hawks were responsible for spawning IS and making its militants more dangerous, or saw fit to rebuke Paul over his refusal to compromise on the NSA’s bulk collection of ordinary Americans’ phone records. Paul really is a different kind of Republican, and this means that his stances will cause significant friction with others within his party. But this is not to say that Paul is somehow un-Republican or even particularly unpopular.

In fact, Paul represents a longstanding tradition in the Republican Party. The notion of a slender foreign policy can hardly be considered alien to the party of Eisenhower, for example, a war hero who nevertheless used his farewell address to warn against the dangers of excessive militarism. The “conservative-realist” wing of the GOP is not as strong today as it was, say, in the 1940s and 1950s, but it is still a recognizable force. And it is to this base—and with a view to swelling its ranks—that Paul is rightly addressing his case.

Overall, the critics are probably right that Rand Paul’s policies will cost him the nomination. But it would be wrong to suggest that Paul win the nomination by running on another platform. Instead, Paul is well advised to continue building his non-trivial following inside what is still a relatively “big tent” party. It would be folly for him to try and convert the whole Republican establishment and grassroots to his banner overnight, but it is the smart political move to continue cultivating a section of the party that few others are catering to.