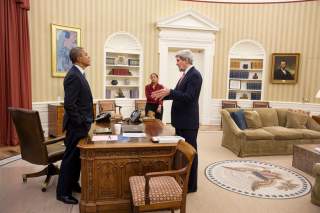 As the horror of the July 17 downing of Malaysian Air flight 17 (MH17) settled in, leaders around the world demanded a full inquiry into what happened. This kind of investigation is necessary. But we should understand that it likely will not provide conclusive answers to key questions—such as who fired the SA-11 Buk surface-to-air missile that brought down MH17 or who provided the missile.

Initial indications point to the separatists as being responsible, in what looks like a terrible mistake on their part. That does not absolve them of responsibility. As for the source of the missile, Russia would appear the most logical candidate.

World leaders understandably are outraged at the shootdown of a civilian airliner with some 300 people on board. But outrage is not a policy. The European Union and United States must decide how they will react—and will have to do so on the basis of less than complete information. Procrastination and inaction will signal to President Putin that Russia can continue business as usual in eastern Ukraine, and the death toll will continue to mount.

The Crash Site and Black Boxes

Following the loss of MH17, demands streamed in for a full investigation. The immediate focus has been on access for an international team to the crash site—located in separatist-held territory in eastern Ukraine—and to the plane’s black boxes: the flight data recorder and cockpit voice recorder.

Unfortunately, the separatists controlling the area of the crash site initially denied full access to Organization for Security and Cooperation in Europe (OSCE) monitors. Reports suggested a chaotic scene, where it was unclear who was in charge. Dutch forensic experts arrived on July 21. Whether they and other aviation experts will get full and unhindered access remains to be seen. After some confusion, separatist leaders have said that they have possession of MH17’s black boxes (with new reports suggesting they will be sent to Malaysia).

Access to the site and black boxes will be important. But will that provide conclusive answers? When they examine the wreckage of MH17, experts will likely be able to confirm what virtually everyone assumes to be the case: a surface-to-air missile (SAM) brought down MH17. (Recent photos show a piece of the airliner riddled by the kind of shrapnel that a SAM would produce.) However, even if the experts find fragments of the missile itself, they will not be able to tell who fired it.

The black boxes record key measures of the aircraft’s flight performance as well as the pilots’ conversation on the flight deck. What they probably will show is a normal flight up until a catastrophic event—but the recorders will not provide data external to the aircraft, e.g., they will not indicate the approach of a SAM.

Who Fired the Missile?

Most indications thus far point to the separatists as having fired the missile that brought down MH17. U.S. intelligence detected a SAM launch from a region controlled by separatists at the time that contact with MH17 was lost. U.S. information is that the SAM was an SA-11 Buk, also known in the West as the Gadfly. (U.S. intelligence capabilities are good at this: in October 2001, they quickly provided evidence that the Ukrainian military had accidently shot down a Sibir Airlines passenger plane over the Black Sea. As was later learned, a Ukrainian missile was fired at a target drone in a training exercise but instead locked on and destroyed the airliner.)

This report corroborates what previously was the most damning evidence. On July 17, Igor Girkin (who also goes by the name Igor Strelkov), the “defense minister” of the “Donetsk People’s Republic,” posted on his VKontakte webpage:

“In Torez Raion [county], an AN-26 has just been shot down, crashing somewhere near the mine called ‘Progress.’ We have warned you—do not fly in ‘our airspace.’”

The Ukrainian air force regularly flies AN-26 transport aircraft (another was reportedly shot down on July 14). The time and location in Strelkov’s post match the time and location of the MH17 shootdown. This post suggests the separatists shot the airliner down, believing they were firing on a Ukrainian military aircraft.

The Ukrainian Security Service has released audiotapes that it said it recorded of separatists talking shortly after MH17 fell from the skies. Granted, the Ukrainian Security Service might be considered a biased source, but that does not mean it should be dismissed out of hand. One recording has a separatist reporting a shootdown “outside of Yenakievo,” while a second has another reporting that the downed plane is not military but civilian. The timing roughly matches the time of the MH17 loss, and Yenakievo is about 25 kilometers from Torez.

Some suggest the Ukrainian military fired the Buk missile in an effort to blame the separatists. But it is not clear that the Ukrainians had SAMs within range of MH17. Moreover, even if a conspiracy theorist were to credit Kyiv with such a cynical and cold-blooded plan, the Ukrainian military had to know that lots of eyes were watching. If the Buk had been launched from a Ukrainian military site or Ukrainian-controlled territory, U.S. intelligence, Russian intelligence and perhaps the NATO airborne warning and command aircraft flying on Ukraine’s western border would have detected it. Exposure of such a crime would have destroyed Kyiv’s relationship and credibility with the West, and the Ukrainian government undoubtedly understood that.

So the most likely theory is that the separatists shot down MH17, believing they were firing at a Ukrainian military transport.

Who Provided the Missile?

This leads to the question of the source of the Buk SAM that the separatists fired. The Ukrainian military certainly had no interest in providing Buk missiles to the separatists; the Ukrainian air force has lost a number of planes and helicopters to separatist SAMs over the past two months.

The logical candidate is Russia. Ukrainian and U.S. intelligence charge that a stream of heavy military equipment—including tanks, towed artillery and multiple rocket launchers—have flowed across the Russian border into eastern Ukraine in recent weeks. A multitude of videos and photos on social media show such equipment traveling through separatist-held areas in Donetsk and Luhansk in eastern Ukraine.

Moreover, Ukrainian authorities reported that the separatists were moving Buk launchers back to Russia early the morning of July 18 (the day after the shootdown). They released a brief video showing a Buk launcher on a transport rig, with at least one of its four missiles missing. U.S. intelligence reportedly confirmed the move. This would seem to point to Russia as the source of the SAM system to begin with.

A related question: who provided the training or operators for the Buk? While the Buk has been around since the 1970s, it nevertheless is a sophisticated, crew-serviced system. It is not a point-and-shoot, shoulder-fired SAM. Buk requires a crew that has been trained to operate the radar and launch the missile. Where would this training come from? The logical conclusion again is Russia. Secretary of State John Kerry charged on July 20 that Russia provided the separatists both the SAM system and the training to operate it.

Much of this information is circumstantial and/or based on intelligence reports that will be challenged by those who disagree with the conclusions. But which theory seems more likely? Theory one: Russia—which has sought to destabilize Ukraine and has armed the separatists with heavy weapons such as tanks—provided the separatists with a Buk air defense system and the training to operate it, and the separatists shot down MH17, believing it was a Ukrainian military aircraft? Or theory two: the Ukrainian military purposely shot down MH17, hoping to make it appear that the separatists had done it—and hoping to do so without being spotted by the many U.S., NATO or Russian sensors watching Ukraine.

Occam’s Razor says that when there are competing theories, the simpler explanation is generally the correct one. Theory one makes a lot more sense than theory two.

The shootdown understandably has outraged government leaders, elite and people around the world. But outrage is not a policy. The question is what comes next. What policies do Western leaders, particularly those in Europe and Washington, adopt?

It is unlikely that they will have more hard evidence in hand than they do now (other than a crash-site analysis that confirms MH17 fell victim to a SAM). A decision to wait for more conclusive evidence, evidence that may never emerge, amounts to a decision not to act.