The Middle East Nuclear Power Play No One Is Talking About 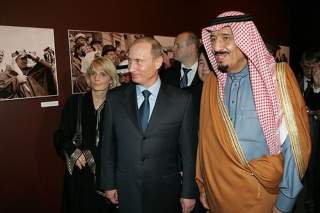 With all eyes currently transfixed on the P5+1 negotiations on Iran’s nuclear future, there is seemingly little attention being paid to another landmark Middle Eastern nuclear trend, spearheaded by Russia. Moscow’s strategic investment in Middle Eastern nuclear-energy development is cementing long-term influence in capitals ranging from Tehran to Riyadh, Ankara to Cairo, to Amman. With Washington’s own relationships with those governments floundering since the rapprochement with Tehran, and relations with Moscow being back at Cold War levels, is the lack of U.S. engagement on this issue hampering overall U.S. foreign-policy objectives?

Sure enough, the rationale behind regional efforts to develop nuclear power can vary. It can signal a “coming out” into high society, where nuclear bling connotes economic and national prestige. It can also signal a forward thinking commitment to clean and consistent energy diversification. Or, it can even hint at the possibility that a country could move to weaponization. But, whatever the reasons are for the Middle Eastern countries to pursue nuclear energy, what is clear is that in making this decision, each country requires significant foreign assistance—assistance that in turn comes with significant political leverage.

Russia’s state-owned nuclear vendor, Rosatom, provides a menu of offerings to countries seeking nuclear power. Bespoke orders can include a range of flexible financing, construction, ownership and operational solutions all underwritten by Moscow. In some cases, the entire menu is ordered. The result is that Russia gains a long-term, strategic and commercial relationship with host nations.

Russian pledges and promises to Middle Eastern nations to become a partner in their pursuit of nuclear energy mirror similar pledges in Europe, Asia, Africa and South America. The political capital banked by the sovereign sponsor—Russia—of such nuclear deals should not be underestimated. Nuclear financing is a long-term, complex and expensive endeavor with little-to-no short-term dividends, and long-term benefits are difficult to quantify. However, Russian nuclear deals are the cherry on top of other infrastructure projects, making it a “win-win” proposition for both sides.

The first and only nuclear project to date in the Middle East that has received Russian money—roughly $1.5B—is in Turkey, set to break ground in 2016. This is the first time the Build, Own, Operate (BOO) project finance model is used in the nuclear industry. Similar arrangements have been proposed for Jordan where Russia’s pledged stake is just shy of half of the proposed $10 billion project expected to commence in 2017. In Egypt, a memorandum of understanding (MOU) with Russia has been signed, but timing and financing is yet to be determined. In addition to an existing Russian plant in Tehran, Rosatom has pledged two more plants. And, most recently, Saudi Arabia and Russia have signed an MOU in June in addition to plans to invest $10 billion of Saudi FDI into Russia, amidst deteriorating relations with the United States.

While the decision to go nuclear requires significant capital outlay, if promises of a sovereign commitment are made, it can help to sweeten the deal. What happens, however, when the sovereign guarantor is itself experiencing geopolitical and financial volatility, and promises and pledges are not fulfilled? As of mid-2015, the Russian economy is in a free fall, hit by plummeting energy prices, the fall of the ruble, Western sanctions, capital flight and a concerted effort by Europe to reduce reliance on Gazprom. The likelihood that Russia can live up to its nuclear promises is looking questionable, given the number of commitments it has made to Bangladesh, Nigeria, Vietnam, Hungary, Finland, Turkey, Iran, Egypt, South Africa, Saudi Arabia and so on. Even for Russia, this starts to add up.

Russia’s current and foreseeable economic constraints indicate the possibility of not being able to deliver on pledges and MOUs, thus providing an opportunity for the United States to step in. Should the United States want to wield its smart power toolbox, providing support for the American nuclear industry will be crucial. And failure to reauthorize U.S. Export-Import bank is like shooting oneself in the foot. And, nowhere is this more important at the moment than in the Middle East.

The Middle East is still exceedingly relevant to U.S. interests, even despite the Asia pivot and America’s newfound wealth of riches coming from shale oil and shale gas, which reduces its import dependency on the Middle East. It is still a major area of instability and of strategic importance. The United States will still import its oil for decades to come, and maintaining safe and open shipping lanes are critical to global commerce. As such, the United States cannot become victim to “flavor of the month” thinking in its foreign policy.

By supporting nuclear power plants in the region, the United States could kill three birds with one stone: curtail Russian influence in the Middle East; exert strategic influence and presence in light of the Iran deal to safeguard its relationship with regional allies; and support domestic nuclear-industry exports. Deal or no deal in Iran, this calculus remains unchanged.

Furthermore, as the United states is undergoing a domestic renaissance in nuclear innovation, it would seem it is a good time to support overseas nuclear power plants (NPPs), as well as stave off foreign competition in the nuclear industry and exert regional influence and contribute to economic development in the Middle East. And while the U.S. nuclear-industry strategy has long been in decline, there is an opportunity to provide sovereign sponsorship for NPPs to offset Russian regional influence in the Middle East. It is time to revisit the role that the Ex-Im bank plays in globally exerting American commercial soft power. U.S. overseas force projection should not be limited to military and humanitarian engagements.

Finally, as Washington already struggles to reassure regional allies concerned about its hedge with Tehran, not engaging enough on civil nuclear cooperation with other Middle Eastern capitals is a missed opportunity to reaffirm strategic ties. And the U.S. domestic nuclear industry risks losing out on vital new export opportunities. Taken together, a strong case for the United States to get involved in promoting nuclear energy in the Middle East can be made. It is unfortunate that while Saudi Arabia and Russia are able to engage in pragmatic compartmentalization of their policies, the United States is less flexible.

But of course, such a strategy is not risk free, especially in such a turbulent region. The Middle East is beset by domestic and transnational insurgencies, refugees, geopolitical competition and political instability. Hence, the risk for nuclear proliferation and accidents is very real. Any U.S. strategy in support of civil nuclear power must inevitably include strong export controls and verification processes to ensuring compliance. However, for countries looking to become first-time nuclear-power producers, discussing proliferation—and concerns over premature escalation—is quite possibly putting the cart before the horse. Large-scale project finance and infrastructure development are significant power-projection tools.

Taking a step or two back: Russia has a strategic plan, whereas the United States seemingly does not.

Melissa S. Hersh is a risk analyst and consultant and a fellow of the Truman National Security Project. Views expressed are her own.