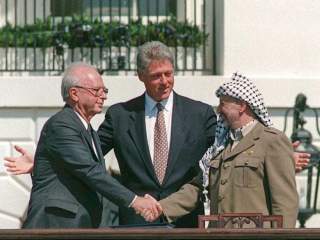 BENJAMIN NETANYAHU and his relationship with assassinated prime minister Yitzhak Rabin continue to arouse controversy in Israel. Martin Indyk, the former U.S. ambassador to Israel, recounted in January on an episode of PBS’s Frontline, “Netanyahu sat next to me when I was ambassador in Israel at the time of Rabin’s funeral. . . . I remember Netanyahu saying to me: ‘Look, look at this. He’s a hero now, but if he had not been assassinated, I would have beaten him in the elections, and then he would have gone into history as a failed politician.’” Netanyahu’s office denied that he said it.

Last November was the twentieth anniversary of the assassination of Rabin. It remains a contentious date in Israeli history. The occasion was accompanied by the publication of several works, most notably by former Newsweek Jerusalem bureau chief Dan Ephron’s Killing a King and a documentary by one of Israel’s leading filmmakers, Amos Gitai, Rabin, the Last Day. A major question raised by both was whether Middle Eastern history, including Israeli-Palestinian relations, would have developed in a radically different direction had Rabin lived. It boiled down to whether the assassination had aborted a peace process that would or could have culminated in a historic peace between the Israelis and Palestinians and, by extension, the Arab world as a whole.

Plenty of turning points can be detected in Israel’s turbulent past. In 2005, Prime Minister Ariel Sharon unilaterally pulled Israel’s troops and settlements out of the Gaza Strip. After his demise a year later—he descended into a decade-long coma, dying on January 11, 2014—no further Israeli withdrawals occurred after Gaza and the partial occupation of the West Bank continues down to the present day (“partial” because the West Bank’s main towns and their peripheries are under the control of the Palestinian Authority, though Israeli troops occasionally mount penetrating raids to arrest or kill suspected terrorists, and Israel fully controls the airspace above the whole of the territory). Sharon’s successor, Ehud Olmert, renewed negotiations with Mahmoud Abbas, the “president” of the Palestinian Authority, and offered him Palestinian statehood in virtually 97 percent of the West Bank and 100 percent of the Gaza Strip, with a Palestinian capital in East Jerusalem. But Abbas rejected the offer, paving the way for the return of Benjamin Netanyahu to the premiership and leaving the status quo, with its burgeoning Israeli settlements, Palestinian terrorism and Israeli counterinsurgency, intact.

Did Sharon’s stroke alter the course of history? The jury is still out. It remains unclear whether he actually intended to withdraw unilaterally from the West Bank, perhaps to a line along the so-called “Security Barrier,” which would have left about 90 percent of the territory in Palestinian hands. It is likely that he was playing it by ear and had not yet made up his mind when felled by the stroke—though it was Sharon who, after the outbreak in 2000 of the Second Intifada against Israel, had sired the idea of the fence and had overseen the initial stages of its construction. While primarily designed to curb the infiltration of terrorists into Israel, many at the time suspected that Sharon had also conceived of the wall as “political,” demarcating the eventual border to which Israel would someday withdraw.

Be that as it may, for many the more tantalizing question mark hovers over the historical significance of Rabin’s demise, partly because of the grim nature of his death at the hands of a fellow Jew, partly because Rabin was a supremely likable, if reserved and shy, character (even a tearful PLO [Palestine Liberation Organization] chairman Yasser Arafat, Abbas’s predecessor, paid a condolence call on the widow, Leah, in the Rabins’ home in Tel Aviv), and partly because of the paradox presented by the apparent transformation of a laurelled general into a peacenik murdered by a right-wing activist bent on halting the Israeli-Palestinian peace process and the prospective withdrawal from Judaea and Samaria, the biblical designation of the territory constituting the West Bank. The killer, Yigal Amir, of Yemenite origin, was at some level also driven by resentment towards the Ashkenazi establishment that Rabin epitomized. As much as many in the Islamic world applaud martyrs, however brutal, in the cause of Islam, so the enlightened West adores its martyrs for peace—and none was more prominent than Rabin.

BUT DID THE two bullets that struck Rabin in the back in downtown Tel Aviv on November 4, 1995 reverse the course of history and definitively halt the Israeli-Palestinian peace process? Rabin assumed the premiership in July 1992, having run and won on a peace platform. Though cerebral, Rabin made an unlikely peacenik. He had made no substantive peace proposals to the Palestinians during his first premiership from 1974–1977, had spent most of his adult life in the army, and had personally signed the orders for the expulsion of the Arab inhabitants of the towns of Lydda and Ramle during the 1948 war. He also had orchestrated the Israel Defense Force’s Six-Day War victory over Egypt, Syria and Jordan and the occupation of the Gaza Strip and West Bank in June 1967; in 1988, in suppressing the First Intifada (or revolt) against the Israeli occupation, he had, as defense minister in the coalition government led by the Likud’s Yitzhak Shamir, ordered the troops to “break the bones” of Palestinian rioters.

But that intifada seems to have convinced Rabin that Israel could not indefinitely rule over the Palestinians and remain a democracy, and that the occupation must be brought to an end. Moreover, he believed that the 1990s offered Israel a strategic window in which to make peace with the Palestinians before the wave of Muslim fundamentalism washing over the region overwhelmed its moderates, before Iran and/or Iraq attained nuclear weapons, and while Arab regimes were bereft of a superpower patron (the Arab-supporting Soviet Union had just collapsed).

Rabin’s chance came in 1992, after two Israeli intellectuals, backed and in part steered by a young Labor Party Knesset member, Yossi Beilin, without Rabin’s knowledge or approval, initiated—at first contrary to Israeli law—clandestine talks with officials of the PLO, with help from the Norwegian government. Many of the meetings took place outside Oslo. By February 1993, the Oslo talks had matured and Beilin, by now deputy foreign minister, informed his boss, Foreign Minister (and long-time Rabin rival for the Labor leadership) Shimon Peres. Peres informed Rabin, who had from the 1960s to the 1980s firmly opposed talking to the PLO, which he dismissed as a terrorist organization whose constitution, the Palestine National Charter, called explicitly for Israel’s destruction.

The negotiations were dogged by Palestinian terrorist outrages in the occupied territories and in Israel proper and by repressive Israeli countermeasures, such as the temporary exile to Lebanon in December 1992 of 415 Hamas and Islamic Jihad operatives. Nonetheless, by May 1993 the main lines of a PLO-Israeli agreement had jelled. After further talks, Israel and the PLO in September exchanged letters of mutual recognition, Arafat stating that the PLO “recognize[s] the right of the State of Israel to exist in peace and security” and committing to renunciation of terrorism and “a peaceful resolution of the conflict.” He added that the clauses of the Charter denying Israel’s right to exist were “now inoperative.” Responding, Rabin stated that “the Government of Israel has decided to recognize the PLO as the representative of the Palestinian people” and to negotiate peace. It appeared to be a historic breakthrough.

On September 13, 1993, on the White House lawn, with President Clinton, Rabin and Arafat looking on (Rabin appeared extremely ill at ease beside the Palestinian leader, but eventually shook his hand), Peres and Abbas signed a “Declaration of Principles”—the first Oslo agreement. Rabin called for an end to “blood and tears”; Arafat, for “an age of peace, coexistence and equal rights.” The Declaration of Principles outlined the path forward leading to a “comprehensive peace . . . and historic reconciliation” and posited the establishment of an autonomous “Palestinian Interim Self-Government Authority,” with the transfer of authority over education, health, social welfare and tourism to the Palestinians, who would set up a “strong police force” to guarantee order and security. During the following years, trust would be built between the two sides and negotiations for a final-status settlement would begin. Seven months later, on May 4, 1994, the two sides signed a follow-up agreement (the “Cairo Agreement”), positing Israeli withdrawal from the Jericho area of the West Bank and from much of the Gaza Strip, both to be ruled by the Palestinian Authority.

But a week later, Arafat, unaware that he was being recorded, told a Muslim audience in Johannesburg that the agreements the PLO had just signed were like the pact (“Hudnat Hudaybiyyah”) Mohammed had signed with a Jewish tribe in Hijaz in 628 AD, a tactical move the Muslims abrogated unilaterally a few years later. Arafat also called for “Jihad” to recover Jerusalem. He seemed to be saying that he would renege upon the agreements as soon as it suited his purposes. Nonetheless, Israel duly withdrew from the Gaza and Jericho areas during the following days and on July 1, Arafat arrived in Gaza, to a tumultuous welcome, treading on the soil of the Holy Land for the first time since 1967. Along with him came thousands of PLO fighters, now designated “police,” from their dispersed camps in the Arab world.