The Mighty X-47B: Is It Really Time for Retirement? 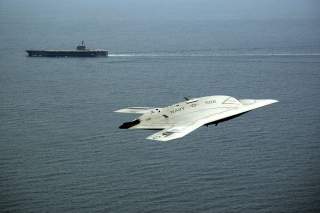 Methinks the U.S. Navy has contracted some weird allergy to fleet experimentation. Why else would service potentates retire a promising experimental aircraft like the X-47B unmanned combat air system demonstrator, or UCAS-D, in its infancy?

Experimentation, of course, is the process of testing some tactic, concept, or piece of kit against reality. Why go to the trouble and expense? Because it’s easy to dream up some gee-whiz idea or build newfangled hardware, hard to tell whether one’s brainchild will work in the real world—surroundings that often appear set against innovation. No auto maker orders a concept car into full-scale production before taking it out on the road to vet the new gadgetry. It’s a testbed for new, oftentimes radical ideas.

The same applies to the martial realm, except fielding new military systems is harder than building a late-model car by an order of magnitude. Reality is a perverse thing, ruled not just by the laws of physics and other nuisances but by opponents bent on stymieing one’s best efforts. Ergo, it’s important to start experimenting early when developing something unorthodox. As one expert on undersea warfare observes, systems put into mass production “have a minimal probability of failure if they’ve survived rigorous experimentation throughout their development. Conversely, if we wait to experiment with systems until they’re almost ready for fleet introduction, the incentive to distort results to avoid system ‘failure’ can be high. We need to prevent that, and we do it by experimenting throughout a system’s development.”

So there’s a politics to innovation as well. Everyone expects failures in the early going. Learning from setbacks is the point of testing unproven hypotheses. This makes for a relatively carefree atmosphere. Think the Wright Brothers at Kitty Hawk. Not so with a program that’s well advanced toward serial production. Such programs develop constituencies—and constituents have a vested interest in hyping a program’s successes while soft-pedaling its shortcomings. Resources and reputations ride on it. Its backers fear the blowback that ensues when delays slow down production or design flaws discovered late in the process demand pricey fixes. Our submarine expert again: “Failure is easier to accept when we’re examining concepts, as opposed to production systems that have enormous resources already sunk into their development.”

The late Rear Admiral Wayne Meyer, the father of the Aegis combat system—the beating heart of fleet air defense since the 1980s—once proclaimed that the route to success in technical innovation is to “build a little, test a little, learn a lot.” Build a few of some new platform, put them through their paces, find out what does and doesn’t work, and incorporate the best of the findings into the next generation while discarding the worst. That’s the experimenter’s credo. Which brings us back to naval aviation’s newest experiment. The two pilotless, autonomous warplanes constructed under the UCAS-D program have notched a series of historical firsts over the past two years. In July 2013 an X-47B landed safely on an aircraft-carrier flight deck and catapulted off the bow again. Last August, the planes kept up the same 90-second launch-and-recovery cycle as their piloted brethren. Just last month an X-47B refueled in midflight.

These are big deals. Landing aboard a postage-stamp-sized airfield—carriers may be mammoth ships, but they’re tiny airports—involves using a tailhook mounted on the plane’s undercarriage to snare an arresting wire stretched across the deck. That yanks the aircraft to a screeching halt. Aviators report that, far from being humdrum routine, carrier landings are more stressful than combat. That’s testament to this operation’s delicacy—and thus to the UCAS-D’s achievement.

Midair tanking is another crucial yet delicate undertaking. It elongates an aircraft’s combat range and on-station time. It requires the recipient to maneuver in behind and beneath a tanker, extend a probe to receive the fuel, and seat the probe in a drogue dangling from the supply plane. Making the inflight hookup, and sustaining it long enough to refill the tanks, demands constant fine adjustments to course, speed, and altitude. That an onboard computer can pull off such a feat speaks volumes about the future of unmanned naval aviation.

Heady stuff. But the navy leadership plans to retire the X-47B now, in its hour of triumph. (Much as it planned to retire the planes following the initial wave of carrier operations in 2013—only to reverse course and continue testing.) As U.S. House Seapower Subcommittee chairman Randy Forbes notes, the demonstrator aircraft still have some 85 percent of their working lives left. Navy leaders evidently see little point toying around with a prototype that in all likelihood will differ sharply from the unmanned carrier-launched airborne surveillance and strike (UCLASS) aircraft it hopes to field by 2022-2023.

But we have the X-47B, and it’s the only show in town. Why not use those flying hours to conduct further experimentation rather than consign newish airframes to a boneyard or aviation museum? Think about it. It’s doubtful in the extreme the X-47B and its handlers perfected the requisite tactics, techniques, and procedures—even for basic functions—by performing a few touch-and-go landings, arrested landings, and catapult launches, along with a single midair refueling. The U.S. Navy lost hundreds of aircraft and lives learning how to operate jet aircraft from carrier decks during the 1950s—776 planes and 535 aircrew in 1954 alone. Naval aviation can spare itself pain of like proportions by starting to acculturate now. Let’s make unmanned planes as normal a part of carrier operations as possible.

Then—whenever a working UCLASS arrives in the fleet—incorporating it into the air wing will be more like integrating a new generation of manned aircraft. Revolutions such as the changeover from propeller to jet-propelled aircraft sweep away something long-established while replacing it with something entirely new. Tumult typically ensues. Evolutionary development is easy and smooth by contrast. In other words, adopting something familiar—even though not identical to its forerunners—constitutes a matter of routine rather than wrenching change. Why not get ahead of the problem by acquainting as many commanders, aviators and flight-deck crews as possible with unmanned air operations before a UCLASS debuts?

Nor do taking off, landing, and refueling span all of naval flight operations. Far from it. Those are the basics. Tactical and operational concepts for employing pilotless aircraft have yet to be fully sorted through. The central question: should a UCLASS be mainly a reconnaissance or mainly a strike platform? Navy leaders appear to have contented themselves with making it a new set of eyes for the fleet. Making some new widget—the carrier, the submarine, and now unmanned airplanes—an auxiliary, helping the fleet do what it already does except better, is a time-honored practice. And indeed, autonomous aircraft could render good service as airborne pickets. They can orbit around task forces 24/7, appraising commanders of what’s transpiring in their vicinity.

Assigning the intelligence, surveillance, and reconnaissance function pride of place, however, would relegate combat to secondary status. The carrier air wing finds itself outranged by shore- and ship-based missiles and tactical aircraft, not to mention increasingly vulnerable to enemy air defenses. That’s why congressional proponents of unmanned air power—chief among them Representative Forbes—argue for making the UCLASS a true strike aircraft, able to puncture enemy defenses and pummel targets on land or at sea from very long range. That, say proponents of a musclebound UCLASS, is crucial to restoring the aircraft carrier’s offensive supremacy.

Why not use an aircraft that’s already flying as an arbiter of contending visions? Imaginatively designed UCAS-D experiments could help navy officials, aerospace engineers, budgeteers, and top decisionmakers judge where best to allocate taxpayer dollars to augment the fleet’s fighting power. However useful, two years of fleet experiments cannot have exhausted the learning opportunities manifest in the UCAS-D program. New tests will give crews practice handling autonomous warbirds and commanders some inkling on how to use them in peacetime, crisis, and combat settings. Let’s hold X-47B trials on board as many flattops as possible, exposing as many people as possible to the next big thing.

New exercises would also help commanders and crews get ahead of a fluid tactical environment. It’s not enough to field aircraft that can do their jobs in placid surroundings. Combat is an interactive game whereby both players have resources at their disposal and every incentive to outdo each other. Both combatants want to win, and they deploy imagination and resources to augment their own advantages while negating the opponent’s. Prospective foes of the United States will try to detect and exploit the vulnerabilities of unmanned aircraft. X-47B flights could help tacticians project what enemy countermeasures could nullify the new planes’ effectiveness, either wholly or partly. Forewarned is forearmed in this lethal game of one-upsmanship.

Look at the problem this way. Philosophers of science debate whether progress comes about through an orderly process of evaluating and revising hypotheses. For Karl Popper the answer seems to be yes: scientists devise a hypothesis to explain or predict reality, then try to “falsify” or disprove it through rigorous experimentation. Thomas Kuhn, however, seems to say no: scientific progress takes place through a fractious political process. The existing paradigm attracts gatekeepers, maintains Kuhn. Academic posts, publications, awards, and livelihoods depend on upholding the paradigm.