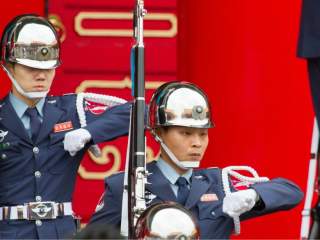 American presidents like to announce major arms sales to Taiwan when they are leaving office. George Herbert Walker Bush announced the sale of nearly $8 billion in hardware, including 150 F-16 fighters and Patriot-derived air defense units, in 1992; Bill Clinton parceled out about $2 billion in defense equipment during his final year in office, 2000; and George W. Bush notified Congress of his intent to sell more than $6.4 billion in defense equipment in 2008. Barack Obama broke this trend by announcing more than $12 billion in arms sales to Taiwan during the in-between years of his first term, in 2010 and 2011. Now approaching its final year in office, the Obama administration has announced its first arms sale to Taiwan in more than four years. And compared with its initial sales, it is uncommonly modest and inherently defensive.

No matter how modest or defensive, China can be relied upon to issue furious condemnations with the tenor and bellicosity more typically expected from Pyongyang than Beijing. Ma Xiaoguang, spokesman for China’s Taiwan Affairs Office, declared that the latest such sale announced Wednesday threatened his country’s relations with the United States. “We resolutely oppose sales of weaponry or military technology to Taiwan by any country in any form or using any excuse,” he warned during his ministry’s vociferous rebuke. More actively, China is threatening to sanction U.S. companies involved in the arms transfer to Taiwan. The threat of sanctions follows the U.S. executive order crafted in April 2015 to enable the administration to impose targeted sanctions against entities caught in cybertheft. Chinese officials are increasingly spinning their most audacious actions as roughly resembling preexisting U.S. policy.

As illustrated by the defensive nature of this arms deal, Taiwan poses no military threat to China, but China poses an increasing threat to Taiwan. As the 2015 Report to Congress of the U.S.-China Economic and Security Review Commission noted, “Over the past decade, the balance of power across the Taiwan Strait has shifted significantly in China’s favor; China now enjoys both a quantitative and a qualitative advantage over Taiwan and is capable of conducting a range of military campaigns against Taiwan.” Despite this trend, or perhaps more accurately because of a desire to hasten it, China’s admonitions have maintained their anger and volume over the years no matter how minimal the arms transfer.

The sale announced this week is no exception to the familiar trend; it largely includes two retired-and-recommissioned Oliver Hazard Perry–class frigates that entered service in the 1980s, a variety of small arms and ammunition and a slew of logistical support equipment, software and training—totaling about $1.8 billion. The sale addresses U.S. obligations under the 1979 Taiwan Relations Act, which “Declares that in furtherance of the principle of maintaining peace and stability in the Western Pacific area, the United States shall make available to Taiwan such defense articles and defense services in such quantity as may be necessary to enable Taiwan to maintain a sufficient self-defense capacity as determined by the President and the Congress.” It is dubious that this new defense package slows the rapid pace of change in a shifting cross-strait military balance. While Taiwan has faced criticism over the years that its defense community is more interested in high-tech “prestige” weaponry than the cheaper, less glamorous defensive capabilities it is more likely to need, by even the latter metric, this sale is a humble one.

To understand why these sales are being downsized in value and impact, one needs to consider our partner in Taipei. While there is certainly a declining appetite on the side of U.S. administrations to seek out these perennial provocations against America’s single largest foreign holder of U.S. debt and our second-largest trading partner, recent policy decisions by the Taiwanese government have also made the U.S. less likely to see the sales as worth their expenditure in geopolitical capital. Over his last two terms, outgoing Taiwanese President Ma Ying-jeou has elevated economic interdependence and diplomatic rapprochement with China as the key to preserving Taiwan’s security, reducing the role of military deterrence.

Taiwan has struggled to meet its own goals for defense spending, consistently falling well below President Ma’s pledge of 3 percent of GDP, itself a far cry from the nearly 5 percent of twenty years ago. Admittedly, China’s military modernization and spending growth have advanced so quickly that its capabilities were perhaps inevitably going to begin lapping Taiwan’s. Even so, the psychological and political dimensions of a commitment to Taiwan’s defense is perhaps more important than the absolute dollars involved in implementing that defense. If Taiwan were more dependably spending the political capital necessary to meet its goals for defense investment, it would likely find a more willing partner in the United States to face those political risks together.

But Beijing also understands that the psychological and political dimensions of statecraft are as important as dollars spent on bullets. Through both its bluster and its bonhomie, China is seeking to constrain President Ma’s successor. Seeing a likely victory by the more independence-minded opposition DPP, Beijing is attempting to “bake in” thresholds and norms from the Ma era. Like the Xi-Ma summit in Singapore, defining which behaviors are deemed deserving of diplomatic carrots, China will likely seek to make this small, modest arms sale the threshold for which future ones will be measured and found especially provocative. Though Dr. Tsai Ing-wen and the DPP are likely to largely preserve the status quo, their probable victory will still likely bring a weakening of cross-strait accords and a desire to rejuvenate sagging defenses. To head this off, Beijing will seek to box them in, defining any deviation from the recent orthodoxy established by President Ma, the KMT and China as gravely destabilizing.

The United States and Taiwan need an equally agile and comprehensive approach to security. We, too, need to keep the ultimately political objectives in the forefront of our policy, while parrying the psychological attacks on Taiwan’s freedom. While this is apt to require more than modest arms sales from the United States, the real source of agency in cross-strait relations is Taiwan. Looking ahead, there are reasons for optimism. The DPP has become more serious about defense policy, issuing a series of “Blue Papers” outlining its vision for a prospective Tsai administration. These papers call for a renewed focus on deterrence and cost imposition—including an emphasis on building Taiwan’s nascent indigenous defense industry. If the next administration is able to demonstrate that Taiwan is committed to the difficult choices necessary to protect everything their experiment in culturally Chinese democracy has built, they will continue to find a stalwart partner in the United States.

Dr. Patrick Cronin and Harry Krejsa are the Senior Director and Research Associate for the Asia-Pacific Program at the Center for a New American Security in Washington, D.C. Follow them on twitter at @PMCroninCNASand @HarryKrejsa.