The More Things Change, the More Iraq Stays the Same 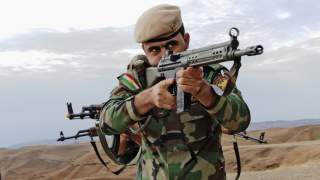 Some of those watching the Tomahawk missiles lift off from the USS Porter on April 7, 2017, to strike Syria might have been reminded of similar scenes in January 1991, when the Tomahawk was chosen to open the battle against Saddam Hussein’s Iraq. The United States has been increasingly involved in Iraq since August of 1990. First, the United States helped eject Saddam from Kuwait, then its military forces policed no-fly zones and weapons of mass destruction in the 1990s. Finally, the U.S. military invaded Iraq in 2003. With the coming fall of Mosul and the defeat of Islamic State in Iraq, the United States will turn yet another page in its relationship with the Middle Eastern state, capping twenty-seven years of involvement.

Today’s U.S. military and security establishment was honed in Iraq. Whereas Colin Powell and Norman Schwarzkopf’s formative experiences were in Vietnam, Secretary of Defense James Mattis, National Security Advisor H. R. McMaster and Chairman of the Joint Chiefs of Staff Gen. Joseph Dunford all earned their spurs in Iraq. In many ways the current U.S. Army is an army forged in the experiences of Iraq, fighting against a combination of conventional forces, insurgents and then a combination of the two.

The current U.S. Combined Joint Task Force, Operation Inherent Resolve, was designated in October 15, 2014, to reflect the “commitment of the U.S. and partner nations in the region and around the globe to eliminate the terrorist group ISIS and the threat they pose to Iraq, the region and the wider international community.” In March 2017, Secretary of State Rex Tillerson hosted the sixty-eight states that make up the Global Coalition to Counter-ISIS. Probably never before in history have so many states been part of such a large coalition to defeat one group. What prompted many of them to join the coalition was primarily the war against ISIS in Iraq and the threat ISIS posed to the region.

In speaking with U.S. commanders on the ground in northern Iraq, visiting their tactical assistance area and their training centers in the Kurdish region, it is clear they have fashioned a very clear mission based on past experience. U.S. Army Lt. Col. John Hawbaker, a commander in the 73rd Cavalry of the 82nd Airborne Division station south of Mosul, is involved with the advise-and-assist mission to support the Iraqi army in West Mosul. He has described an operation that involves training, indirect fire support, air strikes and intelligence sharing that will help the Iraqi Security Forces take back their country. Hawbaker served in Iraq in 2005–2006 and said he was surprised at how quickly ISIS was able to take over part of the country in 2014. “The ISF have victory in hand [today], it is inevitable, they know it and ISIS knows it,” he said in an early April conversation.

Hawbaker compared the battle against ISIS with the one the United States fought against Al Qaeda and other terrorists and insurgents, such as those led by Abu Musab al-Zarqawi. “ISIS is the direct descendent of them,” but became a “much larger and conventional threat,” he said. In June 2015, Iraqi prime minister Haider Jawad Kadhim al-Abadi revealed that ISIS seized 2,300 Humvees and other armoured vehicles when the Iraqi army abandoned depots around Mosul. What that means is that the United States has had to spend some of the last two years destroying its own vehicles. I saw one such Humvee eviscerated by a U.S. air strike in Sinjar in December 2015.

ISIS has been degraded to less than nine hundred men in Mosul, according to U.S. estimates. It is struggling to hang on to other pockets of control in Sinjar, Hawija and Anbar. Now, the questions that remain are: what comes next and what was learned in the last three years? ISIS was able to exploit the power vacuum in Syria to spread across the border into the mostly Sunni Arab cities of northern and central Iraq, such as Tal Afar, Mosul, Ramadi, Tikrit and Fallujah. These, of course, are all names that U.S. forces remember well from after 2003. Mosul was the site of several offensives to root out insurgents; Tal Afar was supposedly the center of a successful clearing operation; and Fallujah is where American contractors were lynched in 2004. President Barack Obama declared an end to combat operations in 2010. By that time, around $49 billion had been appropriated for reconstruction, according to a report Curt Tarnoff submitted to the Congressional Research Service. The report noted that by April 2009 there were 645,000 Iraqi security forces (ISF), including thirteen infantry divisions, many of which received support in some way from the United States. The United States spent a large portion of its Iraq budget in 2007–2008 on training, but admitted only 67 percent of the ISF could execute and plan operations without assistance from the United States. Anthony Cordesman and Adam Mausner estimated in August 2009 that many of those who received coalition training—for example, between 30–60 percent of police—eventually left the security forces.

The startling defeat of the Iraqi military by ISIS, which was initially seen as merely black-clad extremists, showed that although Baghdad had a responsibility to secure the country, it had proved incapable. That began to change with Grand Ayatollah Ali al-Sistani’s June 13, 2014, fatwa calling on Iraqis to defend the country. This sent tens of thousands of Shia volunteers into more than forty militia units including Kata'ib  Hezbollah, the Badr Organization and Asa'ib Ahl al-Haq, which formed the Hashd al-Shaabi or Popular Mobilization Units (PMU). This mostly Shia force that flies religious flags in battle, including those of the Imam Hussein and others showing swords dripping with blood, became an official paramilitary force in December 2016. Its relationship with Baghdad now is modeled on the Iranian Revolutionary Guard Corps relationship with Tehran and Hezbollah’s role in Lebanon.

This puts the United States in the unenviable position of fighting ISIS in Iraq while balancing the fact that they empower Iranian-backed Shia militias. According to Lt. Col. Hawbaker, the PMU does not operate in Mosul and the Americans only work directly with the Iraqi security forces, not with Hashd al-Shaabi. However, on the ground, in the areas leading up to Mosul, the checkpoints I have seen are often controlled by the PMU. The reality is that once Mosul is taken and the Americans move on to advise-and-assist operations elsewhere, sectarianism will return to Mosul.

The United States seems to have learned that tailoring its mission to a very specific goal, defeating ISIS, works. It has also learned that the coalition can have the best impact through training. Seven partner nations trained more than seven thousand Kurdish Peshmerga in the Kurdish autonomous region through January 2017. The Department of Defense FY2017 budget foresaw equipment for twenty thousand troops, and replacement for vehicles destroyed in battle, including 350 Humvees (1,048 had been supplied in 2015). While the FY2016 budget request claimed that failure to finance the Iraq Train and Equip Fund would “further the Sunni/Shia divide” and that assistance to Iraq “will provide a counterweight to Iranian influence.” This pretension was disabused in the FY2017 budget plan. The 2017 plan merely noted that equipment would go to “Sunni Popular Mobilization Forces” and didn’t mention the Shia.

The United States seems to understand that it can’t root out—or even counter—Iranian influence. What it can do is attempt to train several professional Iraqi units, such as the ISOF (Special Forces), and continue to bolster the Kurdish Peshmerga. The question U.S. planners and policymakers have to ask is that: if the learning curve of twenty-seven years in Iraq is that the U.S. presence will be curtailed visibly as much as possible while the United States continue to train local forces and damage ISIS from the air, then what comes next?

The new administration hasn’t sketched out a future plan for Iraq, although it has proved willing to be unpredictable in Syria. The use of the MOAB bomb in Afghanistan on April 13, and the increase in air strikes in Yemen, show that the method of fighting ISIS in Iraq can be a model. It involves no real nation-building or interest in civilian institutions; it is almost purely a military model learned from decades where attempts to build civilian or democratic institutions failed or ossified. This appears to be a Defense Department-led policy that requires the CIA and State Department to take a back seat.

In practical terms, it seems the lessons of Iraq will also result in the reduction of the number of stationary or large forward operating bases, and their army of support personnel, as well as the number of combat outposts, in favor of more mobile and temporary operations, the kind that proved effective against ISIS in Iraq. More drones and airstrikes and special operations and more advising and assisting local forces that are expected to lead operations and set tempo while U.S. airpower picks off enemy targets of opportunities or provides expertise in such things as anti-IED operations or intelligence sharing.