The Most Important 2018 Election for America May Be Mexico's 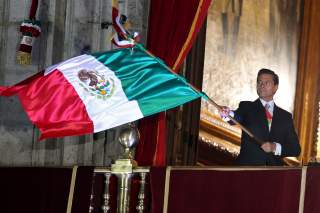 In addition to the established party candidates, for the first time in Mexico independents will be allowed to run for the presidency. Zavala is one, so is the governor of the state of Nuevo Leon, Jaime “El Bronco” Rodriguez, and Armando Rios Piter, the former senator from Guerrero, is another. They are among many other high-profile independents interested in the presidency. Although none of the independent candidates appear to have a serious chance of winning the election, their candidacies will take votes away from the main parties. In the end, they may prove to be pivotal in determining the final outcome.

The campaigns officially begin in March, and it is widely predicted that the campaigns will be intense, conflictive and will involve huge amounts of spending by the parties. Although there are strict limits on how much private cash can go into the race, past experience shows that the electoral authorities have little capability of restricting unauthorized spending by the parties. The potential of illegal money from organized crime entering the campaigns is a daunting prospect that very few politicians wish to discuss in public.

AMLO has a huge advantage going into 2018 with his near universal name recognition, but he is burdened by very high negative numbers in addition to his high positives. This means that he has little room to grow his base, whereas both Meade and Anaya (and of course the independents) have the opportunity to increase their support. Past experience in Mexican elections has shown that candidates and campaigns matter a great deal, and it is likely that the same will hold true this year. AMLO has the most to lose, and he is in a similar position to that which he held in 2006, when his lead in the polls was whittled away and undermined by a concerted campaign by Calderon, who cast him as a threat to Mexico’s stability and prosperity. We should expect to hear more of the same this time around, but it is far from certain that Mexican voters will be as convinced of that threat.

One last wrinkle in the story involves the United States and President Trump. Since Trump took office, Mexican public opinion of the United States has turned dramatically negative. This means that candidates will be tempted to exploit anti-American and anti-Trump sentiment on the campaign trail, and those who do so effectively may pick up a few extra points. If the White House returns to a vehement anti-Mexico, anti-NAFTA, anti-immigrant and pro-border wall message, then the chances of this happening increase still further. In the end, of course, the election is likely to be determined by internal factors; but a series of hostile tweets from the U.S. president could still play a role in bringing a leftist populist to power in a country that is critical for American prosperity and security.

Duncan Wood is the director of the Woodrow Wilson International Center for Scholars’ Mexico Institute and a Senior Adviser at McLarty Associates.

Image: The next government in Mexico will determine the extent of ongoing cooperation with the United States and whether or not the friendly nature of bilateral relations will continue.