The Most Paranoid Country in Europe 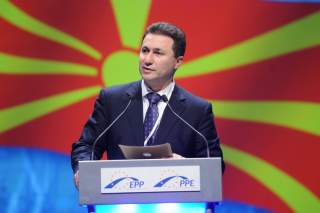 THE REPUBLIC of Macedonia may be the most perplexing country in Europe. Crossing the border, you are informed via text message that you have entered the “cradle of civilization.” Billboards lining major highways are defiant: “This is Macedonia!” It is the only part of Yugoslavia that did not experience significant bloodshed. It is also the only country in Europe, apart from Romania, where every ethnic minority is guaranteed parliamentary representation. And yet Macedonia is not a success story, but one of how a country the size of Vermont has navigated its way back from the shoals of one disaster after another. In 1992, its economy was devastated by an embargo from Greece in the south and a UN-led blockade on Serbia in the north. Three years later, President Kiro Gligorov was nearly assassinated by suspects who remain at large. Then, in 1999, 360,000 refugees—a fifth of the Macedonian population—descended on the country from Kosovo. By 2001, ethnic Albanians of the National Liberation Army were beating the drums of insurgency, and in 2004 President Boris Trajkovski died in a plane crash on the day the country’s EU application was presented in Dublin.

Most of Macedonia’s neighbors treat it as a pariah state. Serbia considers Macedonians “south Serbs” and Skopje the seat of an apostate patriarchate. Bulgaria takes the curious view that Macedonia is a state, but not a nation. But the most intractable critic has always been Greece, which claims that “Macedonia” is already the name of a Greek province and that Macedonia can only receive international recognition with a cumbersome qualifying name: “Former Yugoslav Republic of Macedonia”; “Slavic Macedonia”; “Vardar Macedonia.” Athens is single-handedly responsible for denying Macedonia entry into both the EU and NATO—institutions that Macedonia was qualified to enter a decade ago. Greece’s veto of Macedonia’s accession technically runs in violation of a 1995 bilateral treaty allowing Macedonia to enter international institutions as the “Former Yugoslav Republic of Macedonia,” so long as Macedonia does nothing to “provoke” Greece—a treaty that has resulted in Macedonia changing its first national flag as well as several denominations of its currency in order to show that is has no intention of appropriating the culture of “Greek Macedonia.” “We have gotten used to the impression that we are some sort of threat,” Nikola Poposki, the Macedonian foreign minister, told me in Skopje. “We have gotten used to nearly three decades of unfair treatment. The average Macedonian lives with this reality. He will be highly surprised if, in any context, he gets a fair treatment.”

Nikola Gruevski, the descendent of Egejtsi, Greece’s Slavic minority, took control of the country in 2006. After the 1946–49 Greek Civil War, Nadežda Gruia, the widow of a partisan killed on the Greek-Albanian front, fled her northern Greek village with her three children, including Gruevski’s father, Talo. She settled in Yugoslavia and changed the family’s name to “Gruevski.” Born in 1970, Nikola grew up wanting to be a film actor. He opted for banking after a failed stint in professional boxing. During the privatization of the 1990s, he entered politics, but kept one hand in telecommunications and construction; he was among the first private individuals to trade on the Skopje stock exchange when it opened in 1996. From 1998 to 2002, he was finance minister in the Internal Macedonian Revolutionary Organization (VMRO) government.

In April, I watched Gruevski deliver a press conference at VMRO’s headquarters in Skopje. He was doing so in the capacity of a private individual; last June, under pressure from the EU, Gruevski stepped down from power in the midst of a vast wiretapping scandal that has marred Macedonia in political chaos for over a year now.

He struck me as a rather buffoonish man—a Balkan politician sodden with a power whose source, geography, he misattributed to his own abilities. His small frame bobbed around the podium as a phalanx of state-approved media jostled their hands in the air. What did he think about the refugee crisis? Macedonia was defending the EU from itself. What about the EU forcing him out of power? It was a NATO ploy to undermine Macedonia. Did he worry about the prospects of losing at the polls? No, the opposition was bankrolled by George Soros’s Open Society Foundations. Gruevski spoke unhurriedly and with no great attempt at conviction. As he saw it, it was merely the banal truth.

IN 2003, Gruevski became the head of VMRO. “He was just a technocrat. Unconfrontational, uninterested in history or politics,” the party’s founder, Ljubčo Georgievski, the former Macedonian prime minister, told me. By the time Gruevski became prime minister three years later, Georgievski and the old Yugoslav generation within VMRO had been cleared out. Gruevski brought in Macedonians from the diaspora who grasped how to build the rudiments of a market economy. The Ministry of Foreign Investment went to Vele Samak, a former Microsoft executive from Seattle, and Gligor Tashkovich, the former manager of an oil pipeline in Bulgaria. Information Technology went to Ivo Ivanovski, a former IT manager of a Plexiglas company in Ohio. Immediately surrounding Gruevski is a small circle of advisers known throughout Macedonia as the Familija. His best man, Zoran Stavreski, a six-year veteran of the World Bank, runs Macedonia’s economy. His cousin, Sašo Mijalkov, a security consultant who allegedly oversaw a labyrinth of criminal enterprises in the Czech Republic throughout the 1990s, is his spy chief. No one has accused Gruevski of shirking duties toward clan and kin.

For Gruevski, 2008 was the annus horribilis. The financial crisis stalled the motors of his economic agenda—namely, foreign investment. More importantly, Macedonia was vetoed a place in NATO by the Greeks. The move shocked the George W. Bush administration as much as it did Gruevski, the young, English-speaking technocrat who had staked his political future on bringing Macedonia into the West. With access to the international community barred for the indefinite future, Gruevski’s calculus changed. For two years he had pushed reforms with the purpose of joining Western institutions that would ultimately only curtail his personal power; now he turned to expanding his political power at the expense of jettisoning Macedonia’s qualifications to enter Western institutions.

He pivoted to identity politics. This was an odd decision in a country where one in three Macedonians identified as ethnically Albanian and the other two-thirds had little idea of what identifying as Macedonian actually meant. But for Gruevski, this malleability was an opportunity. He instructed Macedonians to rally around a brazen new past: not the nineteenth-century anti-Ottomanism pushed by the VMRO of the 1990s, nor the antifascist mythology of Yugoslav Macedonia, nor a Slavic Orthodox identity, but a Greek imperial one. Foreign archaeologists were flown to Skopje to hunt for linear descent from the Macedonians of Alexander the Great. A delegation was invited from a village in Pakistan purporting to be the home of ancestors of his army. The Skopje airport and the highway leading to Greece were renamed “Alexander of Macedon.” The national soccer stadium was rechristened “Philip II Arena.” The Macedonian Church began publishing radio broadcasts referring to Macedonia as the “oldest nation on earth.” In doing all this, Gruevski changed the terms of the debate. Macedonia calling itself “Macedonia” was one thing; Macedonia feverishly grasping the crown of three millennia of Hellenic civilization was another.

To his overwhelmingly pro-EU electorate, Gruevski now had an enraged target to blame for derailed accession. Starvation wages, limited imports, restricted travel rights: Greek politicians were responsible for them all. And while historically this was in no small part true, Gruevski’s new policy of antikvizacija, or antiquization, turned twenty-five years of Macedonia’s paranoia about its place in the international community into a self-fulfilling threat. Internally, with no incentive to make progress on two decades of uninterrupted democratic reforms, Gruevski dismantled them altogether. His product-management cabinet turned to stage management. Antigovernment media was silenced through an astonishing string of jail sentences that in six years drove Macedonia’s standing on the World Freedom Index from 34th to 118th—just above Afghanistan, significantly below any other European country. Political opposition has been neutralized with a series of character assassinations and humiliating arrests, many aired on prime-time state television.

The last eight years of Gruevski’s rule have been a jumble of contradictory policies. The neoliberal who ran on a platform of privatization has bloated the public sector on a steady diet of cheap foreign credit. One in three Macedonians now works in a public administration that has been ruthlessly colonized by VMRO; from the university faculties to the judiciary to the police forces, the extension of public contracts are contingent upon loyalty to Gruevski at the polls. In nearly every Macedonian village, you can spot a VMRO-owned building emblazoned with the party’s signature roaring lion; there are more party offices than hospitals in Macedonia. The reformist who pledged to eradicate construction racketeering has institutionalized state money laundering on an unprecedented scale. When I asked analysts in Skopje to explain the state of Macedonia’s finances to me, they couldn’t; VMRO party finances and Macedonia’s GDP are too deeply intertwined. In Washington, the party spends $1.7 million a year on lobbying firms to push party interests it insists are consistent with Macedonia’s. Approximately 5 billion euros—half of Macedonia’s GDP—have allegedly left Macedonia for offshore accounts since Gruevski took power. His successor Gjorge Ivanov is denying revelations in the Panama Papers linking him to offshore accounts.