The Most Shocking Thing about Trump So Far: How Boring He's Been 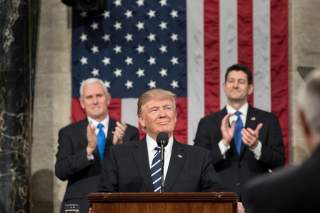 Rather than turn the world upside down, Donald Trump might do little more than sustain and stabilize the liberal order that emerged after World War II.

That will shock those who expect the new president to shock the world. Their predictions range from hot wars to reckless acts of statecraft to utter isolationism. But presidential rhetoric aside, the early signs suggest Trump is pursuing a defense and foreign policy that looks tediously mainstream.

And that’s a good thing. Defying his critics’ expectations, Trump could become the steadying influence the world needs right now.

An understanding of executive doctrine emerges when we analyze the actions taken in office rather than the rhetoric spoken there or on the campaign trail, and when we accept the fact that doctrine often evolves.

The Clinton worldview of engagement and enlargement evolved from the president’s effort to craft something to replace Cold War containment. The Bush Doctrine was largely shaped by the events of 9/11.

In 2009, it was impossible to predict—from listening to Obama’s campaign speeches—the kind of foreign policy the new president would pursue. Heritage Foundation scholars had to wait almost two years before they were confident they had enough data to identify the trends that defined the Obama Doctrine.

Discerning the direction of Trump’s foreign policy may require even more caution. Instant analysis is rarely accurate, and this president’s rhetoric—both before and after the election—was often overwhelming and distracting. A vigorous debate can be had over what Trump’s tweets are. What they are not are the elements of foreign and defense policy.

Even reading fulsome treatments by members of the president’s team offers only so many clues. Before he took on his duties as deputy assistant to the president for strategic communications in the National Security Council, Michael Anton wrote a long piece on the future prospects for the liberal international order. “Trump’s campaign was driven by the basic awareness of ordinary citizens that American peace, prestige, and prosperity were not being served by our foreign policy,” he asserted, adding that Trump “seems to understand that correcting the errors of the neo-interventionists does not require adopting those of the paleo-isolationists.” He made Trump sound more like a tinkerer than a demolition man.

Still, the words of one advisor are just more drops in the bucket of administration rhetoric. In fact, suggesting that the president plans to hold the middle ground between invading every country and sitting on his hands doing nothing echoes the promises made by Obama when he scooped up his 2009 Nobel Peace Prize.

Rather than look at words, let’s examine Trump’s first cut at actions to determine where the administration is headed.

Hard vs. Soft Power: Clearly, Trump wants both and is happy with neither. On the statecraft side, draft budgets reportedly call for real reductions in the State Department and foreign aid. But that is not to say he is soft on soft power. Lopping off all of Obama’s pet progressive projects would yield substantial savings at State without compromising the department’s core missions that address the issues of war and peace. In the end, budgets would look much like they did in the Bush years—which, by the way, saw substantial growth from 2000 to 2008.

On the hard-power side, Trump acknowledges that defense has been underfunded. The military faces a readiness crisis, so the downward trend in military spending must be reversed. That’s not warmongering. The service chiefs have presented plenty of quantitative evidence that the U.S. military lacks the capacity and capability to adequately defend America’s vital interests. The Heritage Foundation’s 2016 Index of U.S. Military Strength rates the current armed forces as “marginal.”

Some have criticized Trump for trying to rebuild the military, but the more accurate critique might argue for even more aggressive reinvestment in the military. Trump is said to be seeking a 2018 defense budget of $603 billion. Heritage recommended a $632 billion budget—even after identifying $14 billion in savings.

Trump also looks to be looking for balance in leadership. His secretaries of defense and state have both made high-profile visits around the world reassuring allies that the U.S. will maintain its commitments to friends and allies. Both have the president’s respect and confidence. Further, the appointment of H. R. McMaster as National Security Advisor has drawn bipartisan—almost universal—praise.

What could be more mainstream than a peace-through-strength strategy that promises to be a good friend to our friends and a fearsome opponent to our unfriendly competitors? Now, the administration can shore up confidence that it has the right balance by speeding the appointment of competent, seasoned national-security professionals to fill out the president’s team.

Europe: Most notable about Trump’s policies is what the administration has not done. The White House has not called for ending sanctions against Russia—the right call, because Putin has not honored commitments under the Minsk agreement. The administration has not distanced itself from Ukraine or pared back the joint military deployments on NATO’s frontier. Nor has it shown any interest in trimming missile-defense plans or the NATO reassurance initiative. All these “non-actions” pair well with the many reassuring statements that senior U.S. officials, and the president himself, have made about America’s continued commitment to the alliance.

Of course the administration can send even more reassuring signals. It could announce a proactive policy of support for Ukraine. It could exercise some leadership in the Balkans, where the EU has clearly dropped the ball. It could throw support behind central European energy and economic programs, which would make the region less susceptible to Russian meddling. It could press the Congress to ratify the accession of Montenegro to NATO.

Still, for now it is clear that the administration is interested in the peace and security of Europe. It is hard to be more mainstream than that.

Middle East: Trump is committed to the defeat of ISIS and Al Qaeda, and to keeping transnational terrorist threats from coming to American shores. That hardly seems off the reservation for U.S. policy. Further, once the rhetoric is stripped away, it is clear that these policies, like his controversial executive order, are focused on providing security, not demonizing the Muslim world.

Trump has also signaled that he interested in restraining Iran. That, too, was standard operating procedure for U.S. foreign policy until Barack Obama entered the Oval Office.

For sure there is much more to be done. Topping the list: dealing with the disaster in Syria.

Far East: Trump has jettisoned the Blazing Saddles policy towards China. Instead of “Don’t shoot Mongo; you might make him mad,” the administration seems happy to bump against the Chinese across the spectrum of military, economic and political affairs.

Again, the reassuring to-do list in Asia is long. That starts with a sustainable, realistic plan to deal with North Korea. But for now, the bold assertion of America’s rights in the region is frankly are far more mainstream than what we got from our last two presidents.

It is too early to say that these tentative firsts are the full foundation of Trump’s doctrine. What matters now is what comes next.

But the “firsts” seen thus far are certainly not isolationist. Nor are they not reckless.

Image: President Trump speaking at the Joint Session of Congress in Feb 2017. Behind him are Mike Pence and Paul Ryan.​