Is the Muslim Brotherhood the Key to Egypt's War on Terror? 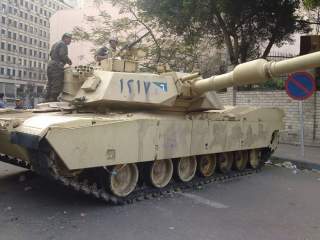 As Egypt seeks to reclaim its prominence in regional affairs, President Abdel Fatah el-Sisi must acknowledge the fact that his rule is not infallible.

The Arab Spring showed that Egyptians have the power to remove their leader, and if he cannot provide them with security, then he will be next. That is why el-Sisi is cracking down so hard on Islamic terrorism today. But his counterterrorism strategy will not work. Today’s security environment is different from the one his predecessors fought in. The rise of ISIL, fall of Libya, and democratization of information, all require a new approach. To stay in power—and continue to work with America towards common regional interests—President el-Sisi must bring the Muslim Brotherhood back into the political fold.

Terrorism is on the rise across Egypt, and it affects more civilians now than it has in years. In the face of this threat, el-Sisi has returned to an old, established counterterrorism strategy. Like his presidential predecessors, President el-Sisi is focused on Egyptian Islamists. An “Islamist” is many things depending on who you ask.

But from el-Sisi’s perspective, it is an Egyptian who actively advocates for the implementation of sharia law in Egypt. The implementation of this vision runs wholly against the military’s own historically secularist, socialist, and nationalist vision for society. Furthermore, the rise of independent Islamist parties is a threat to regional stability, especially for el-Sisi’s closest regional allies and financial backers, Saudi Arabia and the United Arab Emirates.

President el-Sisi’s current counterterrorism strategy can be summed up as: separate, silence, and neutralize dissident Islamists. To separate Islamists from the rest of Egyptians, President el-Sisi is deploying an aggressively anti-Muslim Brotherhood narrative. The narrative portrays all Islamists as Muslim Brothers and all Brothers as terrorists bent on destroying the state. The narrative’s purpose is to frighten mainstream Egyptians into rejecting the Islamists and putting their faith in el-Sisi—a strategy that has historically worked.

The “silence” part of el-Sisi’s strategy focuses on denying Islamists places to congregate, discuss ideas, and organize. First and foremost, that means keeping Islamists off the streets. To that end, the Egyptian government killed at least 817 people while clearing Rabaa Square in August 2013. It also means controlling the mosques and NGOs that Islamists gather in. For example, in February 2015, the government shut down 27,000 mosques across the country because it could not control what their imams preached. Similarly, on March 1, the Egyptian Ministry of Social Solidarity dissolved 112 NGOs because they were “affiliated” with the Muslim Brotherhood.

Finally, el-Sisi has deployed the Egyptian military to neutralize Islamists by either killing or imprisoning them. To that end, the Egyptian army is operating at a high tempo throughout the country. In the Sinai Peninsula, it is heavily engaged with Wilayat Sinai—an old Egyptian terrorist organization turned ISIL affiliate. And throughout the country, the armed forces continue to round up Islamists en masse. Recent numbers are hard to come by, but to illustrate the magnitude of the arrests being made: over 16,000 Egyptians were arrested between August 2013 and March 2014.

This type of counterterrorism strategy has more or less worked in Egypt for the past several decades. But recent changes to the Egyptian security environment have rendered it ineffective, if not self-defeating. Those changes are the rise of ISIL, fall of Libya, and the democratization of information.

ISIL’s expansion into Egypt began last fall, when Ansar Bait al-Maqdis—infamous for wreaking havoc in the Sinai since 2011—pledged allegiance to the group. But while this development is important, it is not revolutionary in itself. The Egyptian military has extensive experience crushing localized terrorist groups. The real threat posed by ISIL is its potential ability to mobilize disaffected Islamists—of which Egypt has plenty.

The reasons for Egyptian Islamists’ disaffection with the system—and potential desire to take up ISIL’s cause of destroying regional regimes like el-Sisi’s—are threefold. First, like nearly all Egyptians, Egyptian Islamists have little prospects for self-improvement through economic participation. The unemployment rate in Egypt last year was over 25 percent overall, and credit is basically inaccessible, making self-advancement through small business creation a non-starter.

Second, as discussed previously, the Islamists’ current position in Egyptian society is beneath President el-Sisi’s boot. That is to say that his efforts to separate and silence them are working, so they lack a political outlet for their discontent—even more so than when al-Qaeda gained major publicity in 2001. Third, while they differ on the degree to which Egyptian society should be governed by sharia law, Islamists universally want sharia to be the official law of the land. Incidentally, so do 74 percent of Egyptians—but most Egyptians prioritize security over religious authenticity in governance.

ISIL gives disaffected Islamists—especially the youth—an alternative to their economically hopeless, politically disenfranchised, and religiously unrealized situation. It gives them an ideological and political framework within which to empower themselves. ISIL has shown by example how individuals can take on established states, and secure both power and prestige on the way to achieving religious purity. This is a resounding message that has already demonstrated its ability to attract thousands of Muslims from all around the world—including from Egypt—to wage jihad in the Middle East.

Moreover, ISIL is uniquely disposed to offer disaffected Islamists an alternative to their situation because it has far more credibility with them than the Al-Nour Party, the only major Islamist group currently allowed to operate in Egypt. That is because, in the summer of 2013, Al-Nour made a deal with President el-Sisi to help him oust then-president Mohammad Morsi in exchange for protection from the ensuing crackdown. The deal saved Al-Nour from being decimated like the Muslim Brotherhood. But at the same time, it significantly degraded Al-Nour’s credibility amongst the disaffected Islamists that reject el-Sisi’s regime and are most susceptible to ISIL’s propaganda.

The second important change to the security environment is the opening of a security vacuum in eastern Libya. While Muammar Gaddafi’s regime was heinous, it did a good job crushing Islamic insurrections in this territory. Today, the area is rife with armed groups vying for control of various chops of land. The result is a patchwork rule of militias without a strong central authority, as the establishment of another ISIL affiliate in Derna, Libya, attests.

Insecurity in eastern Libya presents a new challenge to President el-Sisi. He and his ally, the United Arab Emirates, are currently trying to rebuild a strong central authority in the area by sponsoring General Khalifa Haftar, a Libyan secularist known sometimes as “Libya’s Sisi.” However, General Haftar’s progress to-date has been halting at best. Thus, President el-Sisi will likely have to deploy troops to the border in order to prevent the passage of militants and materials into his country. (Reports say that there are already two million unregistered weapons in Egypt, most of them having arrived from Libya.)

The problem is that the Egypt-Libya border is 1,200 miles long, almost entirely desert, and therefore virtually impossible to control. Moreover, Egypt’s military is not trained to fight there—it is trained, and has experience fighting, in the Nile Delta. Finally, Egypt’s troops are currently concentrated in the Sinai and around major civilian centers like Alexandria and Cairo. Shifting them westward could create weaknesses in the east, jeopardizing the military portion of el-Sisi’s counterterrorism strategy there.

The third major change is the democratization of information. The same proliferation of low-cost information technology that allowed millions of Egyptian youth to mobilize and take down Hosni Mubarak in 2011 is radically undercutting President el-Sisi’s ability to control terrorism today. It is doing so in a few ways.

First, it denies President el-Sisi a monopoly on the information average Egyptians can receive. This matters because the pro-military narrative he has built depends on him convincing his people that he is their one hope for security. But, the democratization of information means that he can no longer prevent Egyptians from witnessing the travesties committed by his troops, continued terrorist attacks in different parts of the country, or rise of alternative candidates for restoring the peace.

Second, the spread of information technology means that President el-Sisi’s efforts to silence Islamists are almost doomed to fail. While he can control the physical spaces these groups meet in, he cannot control cyberspace nearly as well. ISIL propaganda continues to reach Egyptians, and guides for building homemade weapons have proliferated on the web. This development also poses a second-order challenge to the government. In order to tamp down on the online spread of extremist messaging, the government will be forced to invade more and more peoples’ privacy. This could, in turn, could hurt popular support for the regime, even though most Egyptians seem to support the repression of Islamists today.

Finally, terrorists are using newly-proliferated information technology to coordinate their attacks. This makes the enemy “decentralized, fast,” to borrow General Stanley McChrystal’s description of the terrorists he fought in Iraq who used much of the same information technology that has since proliferated in Egypt. A recent series of simultaneous bombings at civilian sites in Giza underscores the potential for increasingly sophisticated attacks to push Egyptian authorities to capacity, and sow fear and distrust in the civilian population.